What reopening the Eliyahu Hanavi Synagogue means for Egypt

There are hardly enough Jews in Alexandria to form a quorum to hold prayers, making the renovation and reopening of the oldest synagogue in Egypt all the more meaningful to the country's Jewish community. 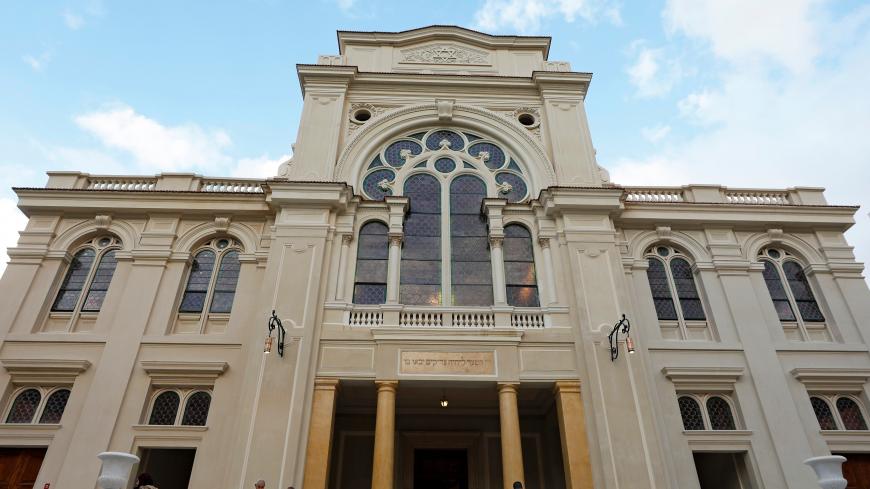 The exterior of the Eliyahu Hanavi Synagogue is shown during its reopening following preservation and restoration, Alexandria, Egypt, Jan. 10, 2020. - REUTERS/Mohamed Abd El Ghany

Alexandria’s Eliyahu Hanavi Synagogue, the oldest synagogue in Egypt, symbolizes a time when the city had a lively and diverse community of Jews, Christians and Muslims. A stone’s throw from a church and a mosque, the synagogue reopened earlier this month after undergoing preservation and renovation.

Today the coastal city's Jewish population numbers no more than a dozen, a far cry from the 40,000 around the time of World War II. Egypt’s minuscule Jewish community, estimated by some to number around 20, welcomed the reopening of the synagogue with joy.

A few steps from the synagogue’s beautifully carved marble stairs, Magda Haroun, head of the Jewish community in Egypt, stood at the entrance to the building, taking in the restorations. She rejoiced at the “revival of the important legacy of Judaism in Egypt, after years of neglect.”

“Despite the fact that there are currently few Jews in Egypt, the synagogue will constitute an important temple open to all visitors and mark the history of Alexandria’s Jews,” Haroun told Al-Monitor. “I hope [Egyptian] synagogues will soon be open to everyone, and I hope they will remain places to nourish the mind and soul. We can use them to host classical music concerts or hold cultural debates, as they will not be visited for worship,” she said. Eliyahu Hanavi can easily accommodate 700 people.

Haroun noted that traditional streams of Judaism require a minyan, a quorum of at least 10 adult males, to be able to hold prayers in a synagogue. Preserving synagogues as cultural sites open to all for learning about Jewish heritage is one of the objectives of Drop of Milk, an organization that Haroun leads.

The three-year restoration of Eliyahu Hanavi, which dates back to the 1300s, marks Cairo's renewed interest in the country's Jewish heritage. It was also closely followed by Israel. The Israeli Embassy in Cairo thanked the Egyptian government for restoring the structure.

“Egypt, where different civilizations coexisted peacefully for centuries, possesses a unique cultural diversity,” Antiquities Minister Khaled al-Anani said at the opening ceremony, which this Al-Monitor reporter attended. “The opening of this synagogue in Alexandria after its full restoration over a period of 26 months sends a message to the world that the Egyptian government cares about the heritage of all religions.”

The restoration of the exquisitely designed synagogue, known for its green and violet stained glass and well-preserved marble columns and staircase, cost more than 100 million Egyptian pounds ($6.3 million) according to Hesham Samir Ibrahim, assistant minister of antiquities for engineering affairs.

The Eliyahu Hanavi synagogue was named after the Israelite prophet Elijah, who defended worship of the Hebrew god instead of the deity Baal. The building's renovation required architects, archaeologists and engineers to work together to ensure that the structure and design from a mid-18th century restoration were respected.

“The Eliyahu Hanavi Synagogue is one of the most important religious and archaeological monuments in Alexandria,” said Abdel Rahim Rihan, general director of research, archaeological studies and scientific publishing at the Ministry of Antiquities.

“Situated on Nabi Daniel Street in the center of Alexandria, it is one of the oldest Jewish synagogues in the Middle East,” Rihan told Al-Monitor. “It was built on the ruins of an old synagogue that was inaugurated in 1354. It was shelled during Napoleon’s [1789] campaign in Egypt and rebuilt in 1850, with contributions from [Ottoman viceroy] Muhammad Ali’s family.”

At the start of the current century, Eliyahu Hanavi was one of two remaining synagogues in Alexandria, but with ongoing neglect eventually suffered major damage in 2012. “Parts of the synagogue collapsed due to rain and strong winds,” Raihan said. “The roof of the women’s side was partially damaged in winter because of the weather. The synagogue was temporarily closed until restoration work was complete.”

“The bema is made of marble, and it is located in the center of the eastern side, where the area for prayers and sermons is situated,” Rihan said. “There are two entrances: one at the south end leads to a room with a wooden container that holds several volumes of the Torah.” Eliyahu Hanavi houses 63 ancient copies of the Torah.

Albert Raiba, a member of Drop of Milk, said Egypt's Jewish heritage includes around 10 synagogues and several religious properties. They have been neglected for years and need restoration. He remarked to Al-Monitor that their restoration would be beneficial to tourism, specifically religious tourism, adding that an organized tour from France is slated to visit Eliyahu Hanavi in February.

Nabi Daniel Street is not only home to Eliyahu Hanavi, but also to the Nabi Daniel Mosque. A few meters away stands St. Mark’s Coptic Orthodox Cathedral, one of the oldest churches in the Middle East. It is said to have been on the site of a church built by St. Mark in the year 43 and that his head remains there. The poet Ibrahim Naji and the writer Lawrence Durrell, author of “The Alexandria Quartet,” had homes on the same street.