Egypt has long promised to preserve the country's Jewish heritage, but only now have concrete steps materialized. 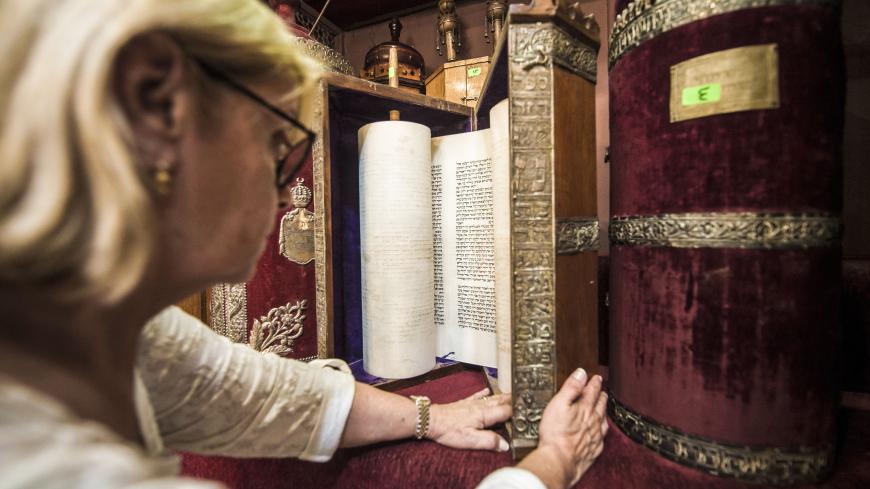 “The government is getting really serious about Jewish heritage,” said Magda Haroun, head of the Jewish community in Cairo and president of the Drop of Milk association. She explained that the government’s registration of Jewish artifacts and other valuable pieces in Egyptian synagogues will help prevent them from being damaged, lost or stolen.

Earlier in December, the Egyptian Ministry of Antiquities announced it had registered 500 Jewish artifacts collected from the country’s synagogues. Haroun said that the artifacts, which have been carefully inventoried since July, include some valuable candlesticks, cups, chandeliers and lamps.

“We are now in talks with the Ministry of Culture to turn Jewish synagogues into cultural centers and we are also planning to cooperate to restore Jewish cemeteries,” Haroun said. She has long advocated opening up the synagogues to the public to keep Jewish heritage alive in Egypt.

In September 2017, President Abdel Fattah al-Sisi announced that the state had allocated 1.27 billion Egyptian pounds ($71 million) to restore eight archaeological sites in Egypt, including in Alexandria’s Eliyahu Hanavi, the country’s oldest synagogue, which dates to the 14th century.

On Dec. 9, Minister of Antiquities Khaled el-Anani said that Jewish heritage restoration is one of the priorities of the government “just like Pharaonic, Roman, Islamic and Coptic heritage.”

“These are big moves that have long been delayed,” Egyptian archaeologist Ali Abu Dasheesh told Al-Monitor.

Abu Dasheesh called Egypt's Jewish heritage an abandoned golden goose. “This heritage is … part of Egyptian history. However, it is neither well preserved nor well utilized,” he noted.

Abu Dasheesh said that the registry of Jewish artifacts and restorations, beginning with the Eliyahu Hanavi synagogue in Alexandria, signal a significant shift in the government’s approach. “I think that the Egyptian government is now adamant about renovating synagogues and Jewish sites,” he said, pointing out that about 60% of the restoration work on Eliyahu Hanavi had been completed.

“These are real steps that are moving forward in contrast with previous governments that announced plans and paid lip service without implementing anything on the ground," he said, adding that the current leadership is fully aware of the importance of Jewish heritage. "It will not only send a message about tolerance and acceptance of others, it could also be used as a way of attracting more tourists to Egypt and therefore boost the Egyptian economy," he explained.

According to Drop of Milk, there are 19 synagogues in the Egyptian governorates of Cairo, Alexandria and Gharbia. The capital Cairo alone has 11 synagogues, some in poor condition. One of the most prominent synagogues, Shaar Hashamayim — literally “Gate of Heaven” — on Adli Street is the venue for most of the activities of the small community in the capital.

Haroun invited a group of Jews, Christians and Muslims to mark the Jewish festival of Hanukkah in a joint celebration at the downtown synagogue Dec. 6. “We have a vast heritage and as an individual I am not worried about it because the youth of Egypt will preserve it,” Haroun said during the first-ever such ceremony.

The event was attended by members of Drop of Milk and a 24-member American Jewish delegation as well as Egyptians interested in Jewish heritage.

Drop of Milk has started to renovate some synagogues itself. “We renovated the Meir'enaim Synagogue in Maadi and Vitali Madjar in Cairo to be used for cultural activities. We also equipped the Maadi Synagogue for theater and musical performances,” Haroun said.

“Opening Jewish sites to tourists and local visitors can provide additional revenues for the government,” Ahmed el-Shami, an economist and professor of feasibility studies at Ain Shams University, told Al-Monitor. “Jews from all over the world can come and visit Egypt to see its Jewish heritage if it is well preserved and promoted,” he added.

Ahmed Ismail, a middle-aged Muslim engineer in Cairo, said that he has always wanted to get to know Jewish culture and traditions. He explained to Al-Monitor, “But in Egypt we are not exposed much to this culture. I think that restoring Jewish heritage and opening synagogues to the public whether they are Muslims or Christians or Jews would foster values of tolerance and acceptance of the other in the Egyptian society.”

“In the past, we used to face the challenge of a lack of awareness about Jewish heritage. Now, this challenge is disappearing at the government and public levels,” Haroun concluded.