The Ministry of Antiquities has begun preservation and renovation of Eliyahu Hanavi in Alexandria, one of the biggest synagogues in the Middle East. 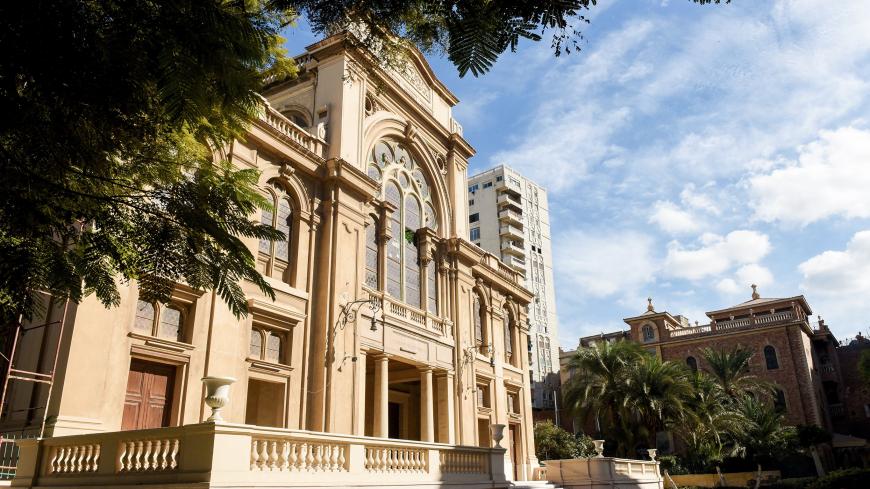 CAIRO — The Egyptian Ministry of Antiquities announced Aug. 3 that it has begun renovations on the Eliyahu Hanavi Synagogue on Nabi Daniel Street in Alexandria at a cost of 100 million Egyptian pounds ($5.6 million).

Eliyahu Hanavi is one of the oldest and most famous synagogues in Alexandria. Built in 1354, it was shelled during the French campaign in 1798, when Napoleon gave orders to raid it to build an artillery barricade between the Kom el-Deka fortress and the sea. The house of worship was rebuilt in 1850 upon the order of Muhammad Ali Pasha, who ruled Egypt from 1805 to 1848, and with contributions from his family.

Former Minister of Antiquities Zahi Hawass told Al-Monitor that Eliyahu Hanavi is one of the biggest synagogues in the Middle East, and it is characterized by its unique architecture. The ceiling of the women’s prayer room collapsed in January 2016 due to bad weather. At that time, the Ministry of Antiquities formed a committee — led by Mohamed Mahran, the head of the Central Administration for Antiquities under the ministry and responsible for preserving Jewish heritage — to draft a plan to restore and protect the temple.

Magda Haroun, the head of the Jewish community in Egypt, has fought many battles to preserve Egypt’s Jewish heritage, including one to renovate temples — 10 historical ones remain — and turn them into tourist sites. The walls of the temples have been weakened through deterioration due to lack of funding for maintenance.

The Ministry of Antiquities has suffered from low budgets and has therefore not been of help. Haroun, an anti-Zionist, opposed accepting foreign funding on the grounds that most Jewish associations abroad that might be interested in donating such funding are groups supportive of Israel.

The funding to renovate Eliyahu Hanavi became somewhat controversial when on July 5 Saeed Helmy, the head of the Ministry of Antiquities’ Islamic, Coptic and Jewish Monuments Department, pointed out that Article 30 of Law No. 117 (1983), on antiquities, and amendments to it in Laws Nos. 3 and 61 (2010) state that the Jewish community, being occupants, shall bear all renovation costs for synagogues. Some have therefore argued that the Ministry of Antiquities footing the bill for renovation of Eliyahu Hanavi is a violation of the law.

According to the statute, the head of the Jewish community in Egypt — for the time being Haroun — is in charge of the maintenance and renovation of Jewish temples, whereas Egyptian churches and the Ministry of Awqaf (or Religious Affairs) are in charge of renovating historic churches and mosques. Maintenance and renovation have in the past been funded by foreign Jewish figures and organizations given the small and declining number of Jews in Egypt. Today only six Jews live in Cairo, and another 19 are thought to reside in Alexandria.

The Ministry of Antiquities does not receive an allocated share of the state budget. Rather, it is provided funding from revenues from Egyptian antiquities expositions and tourism at shrines and museums. After the January 25 Revolution (2011), revenues dropped due to the decline in tourism resulting from the security situation.

In July, the Ministry of Finance decided to allocate 1.27 billion Egyptian pounds (about $70 million) for eight renovation projects, including the Alexandria synagogue. The others were the Greek-Roman Museum, Mohammad Ali Beshbara Palace, Baron Palace, King Farouk Rest House, Kassan Palace, the National Museum of Egyptian Civilization and the Giza Plateau.

Hawass told Al-Monitor, “The listed Jewish temples in Egypt amount to 10, nine of which are in Cairo, including the Adly Street Synagogue [or Sha'ar Hashamayim] and Ben Ezra Synagogue, while Eliyahu Hanavi Synagogue is in Alexandria. The Ministry of Antiquities is equally interested in Jewish, Pharaonic, Islamic and Coptic antiquities as part of Egypt’s cultural heritage.” Prayers are still occasionally conducted at Adly Street and Eliyahu Hanavi as well as other synagogues not listed by the Ministry of Antiquities for historic preservation such as the Ezra Synagogue in Cairo.

Hawass said that misunderstanding of Article 30 is responsible for the funding controversy surrounding Eliyahu Hanavi. Preserving antiquities is primarily the responsibility of the Ministry of Antiquities. He explained that in the absence of worshippers from a community or their inability to bear the renovation costs, in this case the Jewish community, the Ministry of Antiquities is supposed to assume responsibility for preserving historical structures. By Hawass’ accounting, the number of Jewish worshippers in Alexandria stands at 18 elderly women and one man, Youssef Bin Jaoun. The last time prayers were held in Eliyahu Hanavi was in 2012.

Hawass asserted that this is not the first time the Ministry of Antiquities has renovated a synagogue at its own expense. The Moses Ben Maimon Synagogue was restored in 2010 with ministry funding. The government refused to take donations from the Israeli government for the project.

Moses Ben Maimon was established at the end of the 19th century and is dedicated to the theologist commonly known as Maimonides, who was born in Cordoba, Spain, in 1135 and excelled in medicine, mathematics and philosophy. He escaped persecution and fled to Egypt, where he became the personal doctor of the ruler, Salah al-Din (or Saladin). He died in Egypt in 1204.

Mohammad al-Kahlawi, the secretary-general of the General Union of Arab Archaeologists, told Al-Monitor, “Jewish antiquities are an indispensable part of Egypt’s cultural heritage. We lost many of them, just like we lost around 30% of [other] Egyptian antiquities, due to negligence and lack of a strategic vision to benefit from antiquities and raise people’s awareness of their importance.”

Kahlawi said that the renovation of Eliyahu Hanavi would take around eight months. The Arab Contractors Company and Orascom Group will handle the work, which will include architectural, structural and general upgrades.

Mohammad Abdul Hadi, a professor of renovation at Cairo University, told Al-Monitor, “Israeli Ambassador to Egypt David Govrin visited Eliyahu Hanavi Synagogue in 2016 and offered to renovate it in cooperation with the competent Egyptian authorities, but the Ministry of Antiquities rejected Govrin’s offer and announced a comprehensive plan to renovate the synagogue as part of Egypt’s cultural heritage using Egyptian funds and including several projects without discrimination based on religion.”