To save the monument from being submerged under the sulfur Ain el-Sira Lake south of Cairo, Egypt has announced the relocation of Mashhad al-Tabataba, the only monument left from the Ikhshidid era. 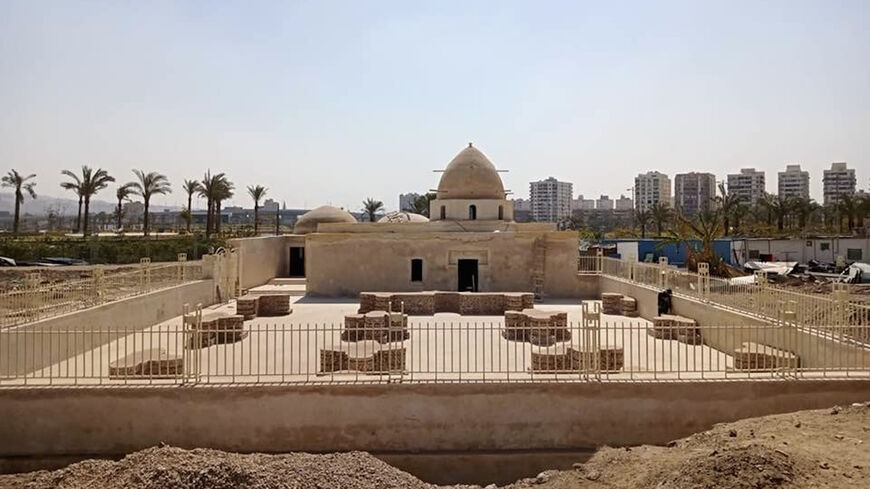 An undated image of Mashhad al-Tabataba after its relocation. - FACEBOOK/Media Adviser to the Prime Minister

Egypt announced the relocation of the Mashhad (Mausoleum) al-Tabataba, the only monument left from the Ikhshidid era (935-969 AD), to a nearby location to save it from being submerged under the sulfur Ain el-Sira Lake south of Cairo.

Secretary-General of Egypt's Supreme Council of Antiquities Moustafa Waziri appeared in a video inside the mashhad, saying that Egyptians began the dismantling and transferring of the mashhad Jan. 1, 2021, and it is now completed.

He said the mashhad “was submerged by the water to a depth of 2.70 meters. Thank God, we did a great job to save the mashhad and transfer it to a nearby safe place.”

After completing the necessary engineering studies, the Supreme Council of Antiquities began the work of dismantling and transferring the mashhad from its location on the eastern side of the lake to the opposite, dry side on the lake's edge next to the National Museum of Egyptian Civilization.

The mashhad was established in the fourth Hijri century, or the 10th century AD. It was built by Muhammad bin Tughaj Al-Ikhshid, founder of the Ikhshidid state, between the years 935-946 AD.

The irregular rectangle structure is attributed to the family of Ibrahim Tabataba, the extended family of Islam’s Prophet Muhammad.

Measuring 30 meters by 20 meters in width, the mashhad has two domes at its southern end. At the northeastern part of the wall is the entrance, and to the left of it is a building consisting of a square room covered by a dome.

Inside the square room is a well that feeds the mashhad with water. Connected to this room is a rectangular building divided into six small rooms — some square, others rectangular. The square rooms are covered with cross vaults and domes. The rectangular rooms are covered with vaults. In these six rooms are the tombs of the Tabataba family. It is connected to a prayer room by a door on the western side. The prayer room is square and built of bricks. On the eastern wall, there is a mihrab indicating the direction of Mecca.

Director-General of archaeological research and scientific publishing in South Sinai at the Ministry of Tourism and Antiquities Abdel Rahim Rihan said the Tabataba family came to Egypt from the Tulunid era (868-905). They lived there for nine continuous generations and requested they be buried there.

“The people of Egypt loved them, were close to them during their life and death, and visited their honorable shrines a lot,” Rihan told Al-Monitor.

He said that Ibrahim Tabataba himself was not buried in Egypt, but those who were buried in the mashhad were his offspring and his brother's offspring as well.

“The mashhad was neglected for a long period of time. There were weeds, rubbish and water surrounding it from all sides. Only its two ancient domes remain,” he added.

Rihan hailed the relocation project: "This great project protected it from water leakage inside. The work of dismantling and transferring was carried out in accordance with the recognized scientific methods.”

“The transferring process shows the archaeological and artistic value of the mashhad, as it has been suffering from a water problem for more than 22 years,” he added.

Gamal Abdel Rahim, professor of archaeology and Islamic arts at Cairo University, told Al-Monitor that Mashhad al-Tabataba is not the first monument to be dismantled and relocated.

“In the 1960s, many temples underwent this process to save them from flooding due to the establishment of the Aswan High Dam — such as the Abu Simbel temples, which were carved into a cliff, and those temples of Nubia,” he said.

Abdel Rahim said there are also examples of this in Islamic antiquities, including the relocation of the dome of the Cistern of Yaqub Shah El-Mihmandar on Salah Salem Street near the eastern approach of the citadel to the south during the construction of Salah Salem Road.

Rahim also spoke of the Comite de Conservation des Monuments de l'Art Arabe, an organization established in 1881 that was responsible for the preservation of Egypt’s Islamic and Coptic monuments. In 1923, the Comite restored and moved Zawiya and Sabil Faraj Ibn Barquq, which was originally located on Taht El-Rab’ Street in the Darb al-Ahmar area in Islamic Cairo, re-establishing it some meters back. It stands today in front of Bab Zuweila, the remaining gate of the southern wall of Fatimid Cairo built in 1092. Zawiya and Sabil Faraj Ibn Barquq consists of a small Sufi structure built between 1408 and 1409.