In Cairo, different architectural styles mingle with each other 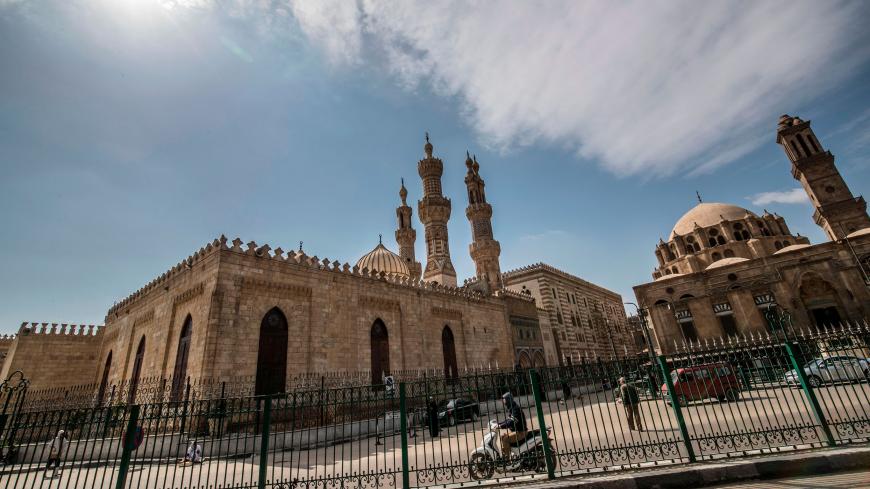 CAIRO — Islamic Cairo includes roughly 800 Islamic monuments, including mosques, hammams, water fountains and schools, each reflecting the architectural styles of every Islamic era in Egypt, beginning with the Muslim conquest by Amr ibn al-As (693-642) in the seventh century.

In recognition of this heritage, the Islamic World Organization for Education, Science and Culture (ISESCO) selected Cairo as the capital of Islamic culture 2020 last year. If it had not been for the outbreak of the coronavirus that restricted public events, April 5 would have been the first day of a whirlwind of festivals, cultural events and tours that would have put in the spotlight the archaeological and historical heritage of the Egyptian capital.

Director of the Historic Cairo Development Project Mahmoud Abdel Basset told Al-Monitor that the program, though postponed, aimed to celebrate the city’s heritage in a number of ways. He said, “Six commemorative medals will be issued for the first time on Islamic Cairo, and each medal will illustrate an architectural symbol from one of the Islamic eras that ruled Egypt, including the Mosque-Madrassa of Sultan Hassan, Al-Azhar Mosque and the Mosque of Ibn Tulun.”

The program would highlight the role of the water carriers as a profession that has symbolized the history of Cairo. Tours of the monuments, photography exhibitions and art contests would also be included in the program.

“Cairo has been host to different dynasties and civilizations that have all built their own monuments throughout the centuries,” archaeologist Youssef Osama told Al-Monitor.

After the Muslim conquest in the seventh century, the Tulunids (868-905), the Ikhshidid Dynasty (935-969), the Fatimid Caliphate (969-1171) and the Ayyubid Dynasty (1171-1250) briefly ruled Egypt, until the Mamluk Sultanate that lasted several centuries (1171-1517). Then the Ottoman Empire (1517-1805) took over, followed by the dynasty established by Muhammad Ali Pasha, the Ottoman viceroy often accredited with founding modern Egypt.

“The monuments built by the Islamic civilizations fall under three categories. There are religious buildings such as mosques, shrines and schools; military buildings such as towers and castles; and civil buildings such as palaces and 'bimaristans' [Persian for hospitals], all of which were renovated over the years. They have all been ornamented with different Islamic decorative arts, either during construction or in subsequent renovations with Islamic designs,” Osama said.

Of all these, mosques — which are currently closed following the coronavirus outbreak — have played a major role in showcasing Islamic decorative arts and architecture of the different periods, he noted.

“The architectural heritage of Islamic Cairo is unparalleled in the Islamic world — some of the streets, lined with monuments on both sides, are like open-air museums,” Osama said, citing as an example Al-Muizz li-Din Allah al-Fatimi Street, which attracts visitors who want to learn more about its history and the history of its construction.

Mukhtar al-Kasbani, an Islamic and Coptic archaeology professor, told Al-Monitor that a mosque represents the architecture of the era it was built in. “The Mosque of Amr ibn al-As, the first mosque built in Egypt in 642 is located in the Ancient Egypt region south of Cairo, and its shape has changed over the years until it became what it is now. The design comprises a large open 'sahn' [courtyard] surrounded by four corridors, the largest of which is the Qibla [the direction of the Kaaba] corridor. A dome in the center of the courtyard is supported by eight marble columns, while the minaret has a conical top,” he said.

He added, “During the Tulunid era there was none other than the Mosque of Ahmed Ibn Tulun, which bore the name of its owner, and was built between 877 and 879, located in the Sayyida Zeinab neighborhood in the southern region of Cairo. The mosque is made up of an open courtyard with four corridors around it. The minaret is isolated from the mosque’s walls and an outer staircase surrounds it. It has plenty of murals and frescoes.”

Kasbani added, “The elements of architecture in mosques evolved and became more diverse during the Fatimid era, which is reflected in the Aqmar Mosque, whose construction was ordered by Fatimid Caliph Al-Hakim bi-Amr Allah in 1125 in al-Gamaliya area in southern Cairo. Much like previous mosques, it has a sahn and four corridors. The entrance, however, stood out from other walls, which were decorated with ornate Kufic inscriptions [one of the most ancient forms of Islamic calligraphy], as well as stellar and muqarnas motifs were used to decorate the mosque's facade, and the minaret returned to be part of the mosque's walls.”

Kasbani noted that the madrasas, or Islamic religious schools, came much later in Egypt's architectural history, with the Ayyubid and Mamluk eras.

“The best example of that period is the Mosque-Madrassa of Sultan Hassan, which was built by Sultan al-Nasir Hasan between 1356 and 1363 in al-Khalifa neighborhood in southern Cairo. It is the most luxurious in terms of Islamic architecture. The entrance door is as high as the walls, decorated with many inscriptions and geometric and muqarnas motifs. The Wall to the Qibla is decorated with ornate Kufic inscriptions,” he explained.

After 1517, the Ottoman Empire’s architectural styles were adopted — and the trend remained when Ottoman viceroy Muhammad Ali established his own dynasty. “This is why the Citadel of Salah al-Din in Cairo has two similarily built mosques, the first of which is the Sulayman Pasha al-Khadem Mosque and the other is the more famous Great Mosque of Muhammad Ali, whose construction was ordered by Muhammed Ali in 1830. The mosque’s design represents a rectangle divided into two equal squares. The first is an open sahn with a lamp in the middle, and the other is topped in the center by a large dome and surrounded by semi-domes. Both inside and outside walls are covered with alabaster-colored marble and the mosque has two slender minarets,” he said.

Raafat al-Nabarawi, former dean of the Faculty of Archaeology at Cairo University and professor of Islamic Archaeology, told Al-Monitor, “Cairo is one of the Islamic world’s most important beacons given what it had to offer Islam and Muslims for many years, through its scientific institutions such as Al-Azhar, the Mosque of Ibn Tulun and Mosque-Madrassa of Sultan Hassan, not to mention the scientific missions abroad to introduce Islam and its civilization and culture in the West.”