Egypt's grand old fountains, poorhouses and other monuments from the Ottoman era have been neglected for years. 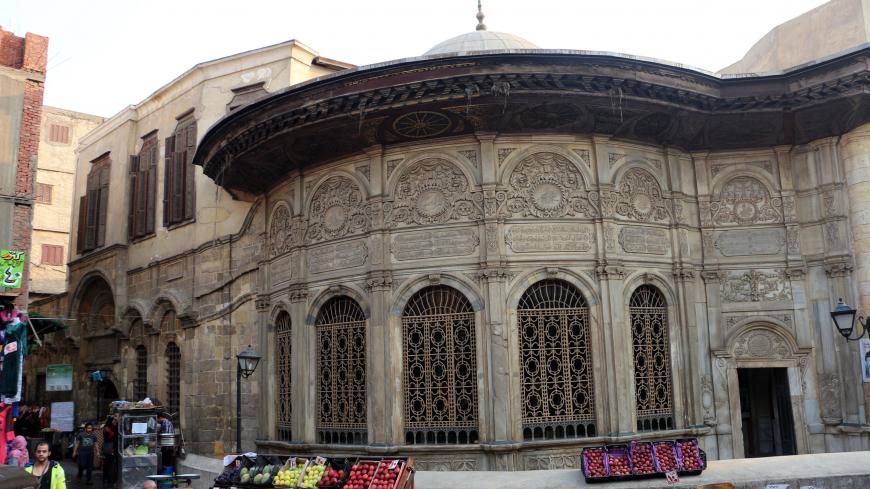 Cairo — Muhammed Ali Pasha, the Ottoman viceroy often named as the founder of modern Egypt, did a good job of keeping the intrusive hand of the Ottoman Empire out of the political and military affairs of Egypt. He was more welcoming, however, toward the Ottoman architecture and decorations. One notable example is the elegant sebil, a public fountain or kiosk that offers water to travelers that he built in 1820. It was the first of its kind in Cairo with gilded window grills, calligraphic panels in Ottoman Turkish and delicately carved marble brought from Anatolia.

Located on Moez Street in Cairo’s Al-Aqqadin district, the Muhammed Ali Pasha sebil is a popular and well-restored monument of the Ottoman era — unlike many of the 300 others in the Egyptian capital.

Jalila Othman, deputy head of the parliamentary Culture, Media and Antiquities Committee, has been pushing for a plan to restore sebils, takyehs (poor houses) and other monuments of the Ottoman and Mamluk eras in Cairo and the rest of Egypt. She said in an August 2019 press statement that she will bring the issue to the current session of Parliament, Oct. 2019-July 2020, but so far her proposal has remained off the agenda.

The sebils are examples of the Islamic tradition of providing water as charity so thirsty travelers can drink or water their animals. The building of sebils came to Egypt with the Muslim conquest in 646. In the Mamluk era (1250-1517), sebils grew grander. The Muslim belief that providing water was a great act of charity — with the highest rewards by God — prompted many wealthy men to build sebils. This act of charity turned to architectural splendor under the Ottoman Empire — which conquered Egypt in 1517 — as the fountains and the kiosks became larger and more ostentatious.

Wagih Ateeq, a professor of modern Egyptian history at Cairo University, told Al-Monitor most of sebils in the Ottoman and the Mamluk eras were built on two levels: On the ground floor there is a well, often topped with a marble cover or roof to block the sun from the water and keep it cool. On the second floor, a small chamber houses a water-bearer who fills jugs from the well and offers them to people outside.

The Egyptians not only created their own special style to sebils but also added a function by introducing a third floor used as a classroom. These kuttabs were schoolrooms to provide basic education to Muslim children, such as reading, writing, arithmetic and memorization of the Quran. There were more than 300 sebil-kuttabs in Cairo alone by the end of the 18th century. The most famous of them all, Sebil-kuttab of Katkhuda in Islamic Cairo, was built in 1744 by Egyptian architect Abd al-Rahman Katkhuda. Though it is often referred to as a ”treasure of Ottoman architecture,” it is very specific to Egypt and carries traces of Mamluk architecture, with its geometric designs carved from marble and intricate wooden lattices.

Another monument that was built during the Ottomans era in Egypt was hospices or poor houses, known as tekyeh. There were tekyehs in Cairo — where Sufi scholars retire and reflect — before the Ottoman conquest, but post-Ottoman tekyehs contained the tombs of the dervishes and were also used as places were the poor and the needy could come, have a meal and stay for the night. Many academics would credit the tekyehs as the start of the Egyptian saying, "Nobody sleeps without dinner.”

Tekyehs in Egypt and Turkey consist of a large inner courtyard where the residents gather to eat, and "samakhan" (listening room) used to worship and read the Quran and dance, Ateeq explained. They also include a reception room for passersby, a hall for women — wives and daughters of residents, a huge kitchen and a library.

Today, only a handful of those monuments are in good condition, giving a clear idea of the architectural style of the era in which they have been built. The Fountain of Quai’t Bay, constructed in 1477 in central Cairo, was restored by the World Monuments Fund between 1996 and 2000. The 19th-century Sebil Umm Abbas, built by the mother of the last Egyptian Khedive Abbas II, is equally well preserved and continues to attract tourists who visit Saliba Street near Cairo’s Muhammad Ali Square. Tekkeyet Mohamed Bek Abul-Dahab has been turned the Naguib Mahfouz Museum, which was opened in July 2019.

Many others, such as Suleiman Agha el-Silahdar and the fountain near the Mosque of el-Rifai, are damaged. Some, such as the sebil of Muhammad Bey Katkhuda, are used as kiosks or small shops.

Ahmed Ismail, a former member of the Supreme Council of Antiquities — a department of the Ministry of Antiquities — told Al-Monitor that the monuments have been neglected since President Hosni Mubarak’s era. He attributes it to the shortage of funds for restoration and the need to prioritize.

He pointed out that the Islamic antiquities sector's revenues in 2010 — the year before the Arab Spring and one of the highest years of Egyptian tourism — was around 200 million Egyptian pounds ($35.7 million). This amount represented about 15.4% of the total tourism revenues from tourists visiting all historical monuments — which amounted to 1.3 billion Egyptian pounds ($232 million). Measured against overall tourism revenues, these revenues became even more insignificant at 0.3%of the total. Ali Ghonem, the owner of a tourism company and a former member of the Federation of Egyptian Chambers of Tourism, also told Al-Monitor that Islamic monuments bring in low revenues when compared to beach tourism.

But, he added, this is partly due to the poor promotion of the monuments abroad and lack of tourism programs to attract tourists to the Ottoman or other Islamic monuments.

Ghonem said that Turkey can be used as a model for promoting its Islamic shrines and monuments, he said.

“Turkey reaps billions of dollars annually from foreigners’ visits to Islamic shrines such as the Sultan Ahmed Mosque and Topkapi Palace. It also spends billions of dollars annually on the promotion of tourism and its Islamic monuments through huge drama productions that encourage the audiences to visit the areas where the films took place,” he said.

Mohamed Shehata, an Egyptian blogger who writes about history and heritage, said that the present state of sebils and tekyehs are emblematic of the general negligence of Ottoman heritage during the Mubarak era.

"They believed that the Ottoman period in Egypt was a Turkish occupation of Egypt and not worth the attention,” he said.

Ateeq, the professor of history, disagreed that they should be written off as Ottoman heritage and not part of Egypt's own. “The sebils, tekyehs and other monuments of the Ottoman era show the creativity of the Egyptians — they are not the works of Ottoman sultans, but of Egyptian architects and builders,” he said.

“[Some of the Egyptian styles] had fascinated Ottoman sultans to an extent that they sent missions of Egyptian artists to Anatolia to teach Turkish people those arts,” he explained.