Coptic and Islamic art have long shared space in Egypt, where the decoration and architecture of mosques are vibrant examples of their mutual influence. 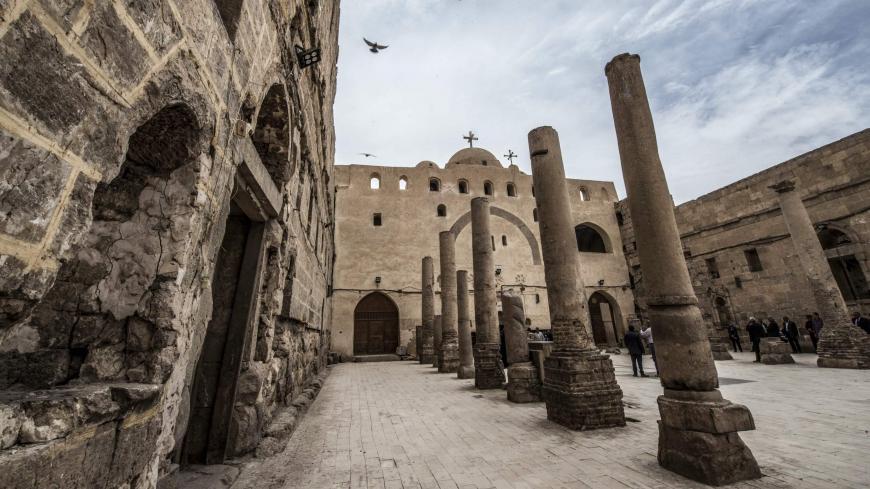 This picture taken on April 6, 2019, shows a courtyard in the Coptic Orthodox "White Monastery" of St. Shenouda (Schenute) the Archimandrite in Egypt's southern Sohag province, south of the capital Cairo. - KHALED DESOUKI/AFP via Getty Images

CAIRO — Islamic art is not the product of one country or one people, writes Tharwat Okasha in his book, “The Encyclopedia of Islamic Photography.” Rather, it is the merger of the arts of several civilizations that flourished before Islam, including the Persian, Roman and Byzantine civilizations, due to the geographical expansion of the Islamic state.

Mukhtar al-Kasbani, a professor of Islamic and Coptic antiquities at Cairo University, told Al-Monitor, “Religious tolerance in Egypt instilled harmony between religion and art. Egyptian rulers had focused on the competences and skills of artists or architects without discrimination based on religion. This prompted Muslim architects to learn the decorative features of Coptic art. They subsequently developed these stylistic features and gave them an Islamic identity, turning them into what became known as Islamic art.”

He pointed out that Islamic art in Egypt is characterized by abstraction, simplicity and the use of geometric and vegetal forms, while rejecting the depiction of living beings. “All these characteristics are inspired from Coptic art. This appears clearly in the decorations covering the walls, facades and doors of mosques. Egyptian mosques and churches are simple in terms of architectural composition and design, unlike the Pharaonic temples, which are grandiose and dazzling.”

Kasbani commented on the marble columns topped by crosses that are found in the mosques of Historic Cairo. “These were brought from ruined buildings. No church was demolished to build a mosque since the Islamic conquest of Egypt. The crosses decorating the tops of the columns, or capitals, are a manifestation of Coptic art. There was no religious objection to using and preserving remnants of Coptic or Pharaonic monuments in building mosques.”

He added that there are mosques in Cairo where capitals bear crosses, including Al-Azhar Mosque, where a human head appears in one capital and another bears a bird.

Al-Nasir Mohammad Ibn Qalawun Mosque, Al-Saleh Tala'i Mosque and the mosque of Al-Tanbugha Al-Mardani all contain column capitals decorated by crosses. Visitors can still see the crosses or parts of them. Some have been broken or eroded over time.

Tour guide Nur Yahya agrees with Kasbani. He confirmed that many of the mosques that were built since the Islamic conquest of Egypt in 641 AD through the Mamluk era include capitals depicting crosses that were brought from ruined churches or run-down Christian homes.

Yahya told Al-Monitor that most of Egypt's Muslim rulers have preserved its Christian churches. “Some Pharaonic temples and Roman monasteries have turned into churches with the spread of Christianity and before the introduction of Islam. Pagan [imagery] in these churches were erased and their walls and pillars were decorated with crosses and passages from the Bible.”

Yahya pointed out that Coptic influence on Islamic art goes beyond columns from ruined churches, saying, “A marble Gothic door was brought from one of the churches of the city of Acre. It was used as a gate to the Al-Nasir Mohammad Ibn Qalawun Mosque in Al-Muizz Street in Cairo."

Yahya explained that domes hold the same religious significance in mosques and churches such as “the Church of Abu Serga [St. Sergius] and the Hanging Church in the Old Cairo neighborhood." He added, "Domes also are found in mosques, where we find domes topped by a crescent."

Abdul Rahim Rayhan, an archaeologist and director of research, archaeological studies and scientific publishing for the archeological sites of South Sinai, said that Christian and Islamic architecture in Egypt share a great deal of symbolism owing to the mutual influence and cohesion of the two traditions.

The mosque was built by order of Prince Ahmed Ibn Tulun, the governor of the Abbasid state in 877 AD, at the top of Jabal Yashkar overlooking the hills of Mokattam. “Ibn Tulun wanted to build a mosque that would withstand fire or flood, even if Egypt was entirely consumed or submerged. The mosque was supported by 160 brick piers instead of the marble columns used in most mosques,” he said.

Rayhan also talked about Al-Rifai Mosque in the Citadel Square in Cairo. “Khoshyar Hanim, the mother of Khedive Ismail, ordered its construction in 1869. The mosque was built over two stages and Hussein Fahmy Pasha was the original engineer. When Hoshiyar Qadin died in 1885, work was halted on the mosque and was resumed 25 years later at the order of Khedive Abbas Helmy II. Max Herz Pasha, a Hungarian Jewish architect and head of the Committee for the Conservation of Arab Monuments in Cairo, led the second phase of construction. This is why the mosque was built with a facade decorated with giant crosses.”

Rayhan pointed out that the similarity between Coptic and Islamic arts attest to the shared values ​​and cohesion between the Egyptian nation's two main religious traditions.