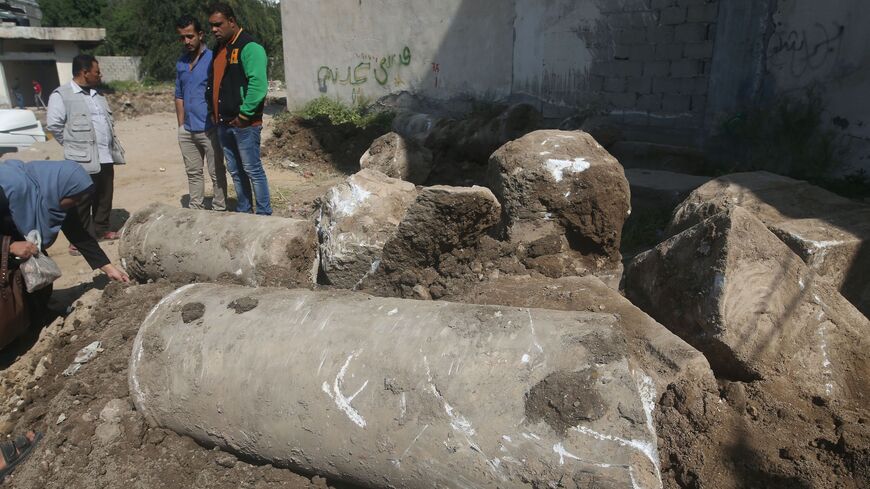 Palestinian archaeologist Hyam al-Betar (L) inspects marble columns excavated during the construction of a commercial building on what is believed to be the site of an ancient church in Gaza City, on April 4, 2016. - MOHAMMED ABED/AFP via Getty Images

“During the recent offensive on the Gaza Strip, our parishioners flocked to churches for refuge. We turned our churches into shelters. At the Holy Family Roman Catholic Latin Church, we would pray to God every day during the aggression for protection and safety,” Yousef Asaad, the assistant pastor at the Holy Family Church in Gaza, told Al-Monitor.

“Everyone was targeted in Gaza during the aggression. Israel does not differentiate between Muslims or Christians. We were all at risk. The aggression did not spare places of worship. Although deemed part of Gaza's historical heritage and of cultural value, these premises were targeted or damaged due to the bombing of surrounding areas. Prayers and rituals were interrupted by the intensity of the strikes. Worshipers were afraid to reach the church. We moved to other facilities affiliated with the church, such as the Rosary Sisters School or even to the homes of our parishioners to hold prayers,” Asaad continued.

He said that the Rosary Sisters School was the most affected by the fighting. “The school building sustained major cracks that might mean the demolition of some of it. Also the event hall, the sound lab, computers and the solar power unit there were destroyed, in addition to cracks in the Holy Family Church.”

Asaad noted that the church is constantly working to provide support and assistance to affected and poor families in the area. “The Latin Church aims to serve the poor and needy people regardless of their religion. After the war, we started a program of entertainment and recreation for parishioners, especially children, to help them overcome fear and make them feel safe again. The program included prayers, game sessions, psychological release activities and visits to tourism sites. The Latin Patriarch in Jerusalem, Pierbattista Pizzaballa, is scheduled to visit [Gaza] from June 14 to 17. This will raise the morale of the parishioners.”

According to the Latin Patriarchate of Jerusalem, the Latin Church community numbers 130 individuals in the entire Gaza Strip, out of about 1,130 total Christians.

Several international conventions and treaties protect Palestinian cultural heritage, including the 1954 Hague Convention for the Protection of Cultural Property in the Event of Armed Conflict. However, Israel repeatedly ignores international law and has been repeatedly accused of working to obliterate the features of Palestinian identity and heritage.

Not far from the Latin Church in Gaza City lies the Great Omari Mosque (also known as the Great Mosque of Gaza), the oldest mosque in the Gaza Strip and the second oldest in Palestine. The imam who leads the noon and afternoon prayers there, Nabil Berzek, said the mosque remained in operation during the latest fighting, but the number of worshipers declined dramatically.

Berzek told Al-Monitor that in the Great Omari Mosque, like in other mosques in the Gaza Strip, the Maghrib and Isha prayers were combined to allow worshipers to stay home after Maghrib to protect them from Israeli airstrikes.

Berzek added, “We made sure to perform the call to prayer and hold prayers in a message to Israel that it did not prevent us from performing our religious rituals. We even held two Friday prayers during the aggression, but our sermons were short and the number of attendees was limited. Several funeral ceremonies were held at the mosque for victims that fell during the fighting round, including 19 from the Kawlak family.”

He explained, “The Great Omari Mosque, located in the heart of the old city of Gaza, was built about 2,000 years ago as a pagan temple, but it was converted to a church in 406 AD. In the seventh century AD, Muslims turned it into a mosque after the conquest of the city. It is the second largest mosque in Palestine after the holy Al-Aqsa Mosque in Jerusalem.”

A Byzantine church that was discovered in 1998 near the northern Gaza Strip town of Jabalia was one of the heritage sites recently hit by Israeli artillery. The church was partially damaged during the Israeli invasion in 2003, and was severely damaged during the 2014 war.

The nonprofit Emergency First International began to restore the church in 2018 under the supervision of the Palestinian Ministry of Culture and Antiquities, but the Israeli strikes have destroyed the work.

Director-General of Antiquities and Cultural Heritage at the Ministry of Tourism in Gaza Jamal Abu Rid denounced Israel’s direct and indirect targeting of antiquities. He described these attacks as part of Israel’s plan to blur the identity of the Palestinian land to justify the idea that Palestine is a land without people and a people without a land.

Abu Rida told Al-Monitor that the Byzantine church site was severely damaged, saying, “This shows the severity of the airstrike and that Israel intended to inflict great damage to the archaeological site. The site has been undergoing restoration, maintenance and excavation since 2018, which has so far cost $2 million in external funding.”

He explained that the wall between the Katib al-Wilaya Mosque and the historic Church of Saint Porphyrius was hit in the bombing, damaging the mosque and church. Work is now underway to rebuild the wall.

The Church of Saint Porphyrius, one of the oldest churches in Gaza, is built around two huge marble columns. The church was named after St. Porphyrius, who was buried in it.

Katib al-Wilaya Mosque was built under Sultan Al-Nasir Muhammad bin Qalawun in 1432 AD. It was built in what used to be the administrative offices of St. Porphyrius Orthodox Church, which gave that space to Muslims to build a mosque adjacent to the church in a sign of coexistence and tolerance.

Al-Zawiya market is one the oldest markets in the Gaza Strip. Built during the Mamluk era, it attests to the various past civilizations that existed in Gaza throughout the ages. Its shops attract large crowds of visitors, especially on occasions and holidays, with an assortment of products like leather goods, perfumes, food supplies, sweets and gold jewelry. Economists often cite the commercial activity in the market as an economic indicator.

Gazans from all over the Strip visit the market to see its antique historical features, which include domes and arches dating back to the medieval Islamic ages.

In the middle of the month of Ramadan, the Gaza Strip relaxed the coronavirus restrictions imposed on markets. Merchants and sellers stocked up on goods in anticipation of Eid al-Fitr, but the Eid festivities were halted by the Israeli offensive. Merchants ended with heavy losses as shops were forced to close down.

Hiam Bitar, a researcher at the Ministry of Tourism and Antiquities in Gaza, told Al-Monitor, “Israel is trying to destroy every ancient site it cannot control. In every aggression on Gaza, ancient sites are severely targeted. A large number of architectural monuments and sites were destroyed or damaged by Israel in the past years, such as Mahkamah Mosque and Al-Thafar Damri Mosque. This is in addition to the damage to ancient houses in the Zeitoun neighborhood, al-Balakhiya archaeological site, The Great Omari Mosque, the Tell el-Sakan archeological site, Tal Umm Amer, which contains the ruins of the St Hilarion monastery, and others. Most recently, Israel targeted the Byzantine Church in the northern Gaza Strip.”

Bitar went on, “As a result of the offensive, archaeological sites were almost completely abandoned as missions and public visits stopped,” noting that antiquities in Gaza also suffer from the Israeli siege imposed on Gaza that prevents much excavation, restoration and maintenance work.

In bombing the Gaza Strip, Israel has once again completely disregarded the international agreements and conventions that protect Palestinian antiquities and heritage sites.