Gaza’s venerable Al-Thafar Damri Mosque is a reminder of the prestigious history of the Islamic civilization during the Mamluk period. 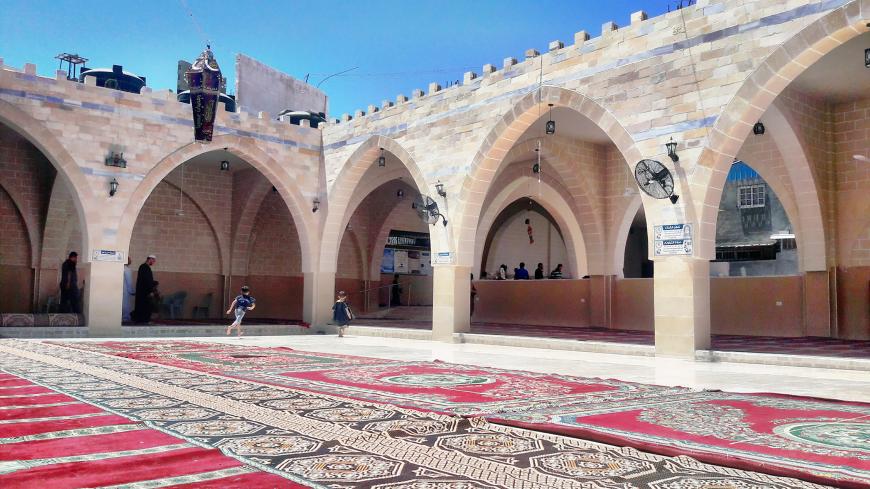 The courtyard of the Al-Thafar Damri Mosque is seen in Gaza City, Gaza Strip, in this undated image. - Aelkezmra

Inside the Shajaiya neighborhood in the east of Gaza City, Al-Thafar Damri Mosque attests to the prestigious history of the Islamic civilization during the Mamluk period, with its facades and courtyards showing Quranic verses and embellished with decorations engraved in sandstone and pointed arches.

The Shajaiya neighborhood is named after Shuja al-Din al-Kurdi, an Ayyubid emir who was killed in one of the battles between the Ayyubids and the Crusaders in 1239 AD. The neighborhood was built during the Ayyubid era. It stretches across 14,305 acres and is inhabited by more than 110,000 persons. Most of its residents work in light industries such as clothing production and agriculture. The neighborhood witnessed its most prosperous period during the Mamluk era.

Kamal Al-Afghani, the imam of Al-Thafar Damri Mosque, told Al-Monitor, “The mosque was named after its founder, the Mamluk Prince Shihab al-Din Ahmad bin Azafir al-Thafer Damri from Thafer Damar in the countries of the Maghreb. It was built in 1360 AD and is deemed one of the oldest and most important Islamic and archaeological monuments in the Gaza Strip.”

He added, “The mosque consists of two parts, one modern and another ancient. It consists of three iwans [rectangular halls] overlooking the prayer house, separated by wall-mounted pointed arches, a renowned characteristic of Islamic architecture. The arches are decorated with sandstone-engraved ornaments, while the windows take the shape of a horseshoe arc. Each window is separated from the other with a gate allowing the entry of worshipers to the prayer house. The mosque’s area is estimated at more than 600 square meters and it can accommodate nearly 800 worshipers.”

Afghani noted that the walls of the mosque are more than 80 centimeters thick, according to the architecture that prevailed during the Mamluk period. “The mosque includes a small library with more than 200 diverse books, a center for memorizing the Holy Quran and a prayer room for women, in addition to a room containing the tomb of Prince Al-Thafer Damri.”

“The restoration works tried to preserve the precise architectural details dating back to the old Mamluk era,” Afghani explained.

According to an archaeological guide issued by the Ministry of Tourism and Antiquities in 2013 marking such sites in Gaza, the coastal enclave is home to 39 archaeological buildings and sites, including mosques, churches, palaces, shrines and ancient houses.

Jamal Abu Raida, director of antiquities and cultural heritage at the Ministry of Tourism and Antiquities in Gaza, told Al-Monitor, “Al-Thafr Damri Mosque, locally known as the Qazmari, is one of the most important Islamic and archaeological monuments in the Shajaiya neighborhood in particular and the Gaza Strip in general. It marks the Mamluk era in Palestine.”

He noted, “The Mamluks in Palestine were keen on building mosques, schools, palaces, baths and lodges for travelers. They also built caravanserai on the roads to serve commercial caravans, while making sure to preserve the Islamic characteristics of Arab cities. The architecture during that era bore the marks of the Mamluk period, during which the Tatars and the Crusaders were defeated.”

Abu Raida said that Israel not only targeted Al-Thafer Damri Mosque during its 2014 war on Gaza but also destroyed other mosques, such as the Mahkamah Mosque, which was also built during the Mamluk era. “The Israeli bombing operations also damaged other archaeological sites, such as the Byzantine church in Jabalia in the northern Gaza Strip. They also destroyed the eastern wall of the Roman Catholic Church of Saint Porphyrius in Gaza City and caused a crack in the structure of Al-Khader Monastery in Deir al-Balah in central Gaza. These attacks were intended distort historical facts and destroy the civilizations of Palestine.”

Abu Raida added that the ministries of tourism and antiquities and endowments have drawn up a plan to restore Al-Thafer Damri Mosque.

According to Gaza’s Tourism Ministry, Gaza's archaeological and tourism sectors suffered heavy losses as a result of the direct and deliberate Israeli attacks on tourism facilities and archaeological sites and buildings during the war on the besieged enclave. In a 2014 statement, the ministry indicated that the antiquities sector incurred losses estimated at $850,000.

Palestinian historian and researcher Salim al-Moubayed told Al-Monitor, “The Gaza Ctrip is home to several archaeological and historical sites and monuments, with its strategic location as the northern gateway to Asia and the southern gate to Africa. The enclave was a stopping place for the Romans, Byzantines and Crusaders … heading south toward Egypt and the Sinai Peninsula.”

Moubayed continued, “Gaza has a distinguished ancient history. Mamluk poet and historian Khalil Ben Shaheen Zaher called it the ‘King's vestibule,’ Napoleon Bonaparte considered it the gateway to Asia and the garrison of Africa, and the Arabs called it ‘Gaza Hashim’ in reference to the tomb of Hashim ibn Abd al-Manaf, the Prophet Muhammad's great-grandfather. The Gaza Strip was the scene of several battles during the Babylonian, Assyrian and Pharaonic periods.”

He noted that the Shajaiya neighborhood includes several ancient mosques, such as the Othman Bin Affan Mosque and the Mahkamah Mosque. “It also hosts Al-Montar hill, which rises more than 85 meters above sea level. The hill was where Napoleon’s army was garrisoned as well as Turkish troops and a number of Arab armies.”

Moubayed explained, “There are many historical and archaeological treasures in the Gaza Strip, specifically in the area known as Old Gaza that extends from the Shamaa Mosque in the south to the Mosque of Al-Sayed Hashim in the north and from Sheikh Shaaban’s cemetery in the west to the Shajaiya cemetery in the east, all evidence that the city was built over the ruins of ancient mosques and churches thousands of years ago.