Dozens of mosques dating back thousands of years are spread around the old city of Nablus, reflecting the rich history of the city. 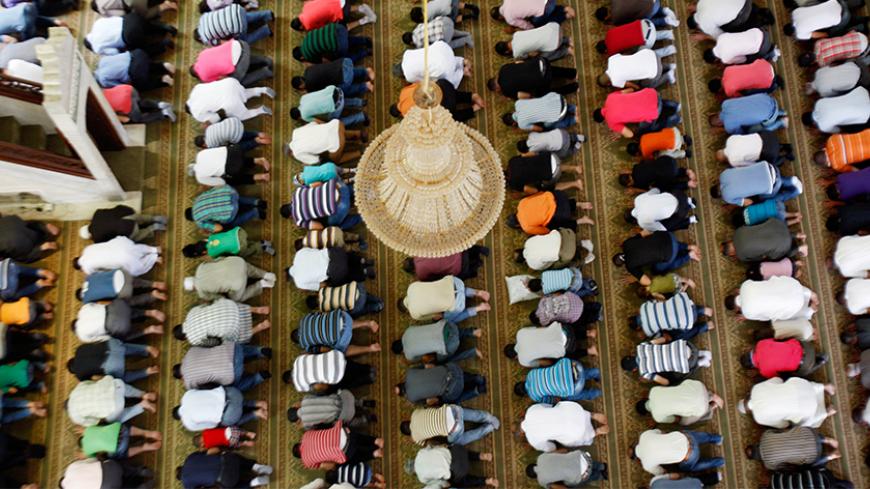 Palestinian men pray at a mosque in the West Bank city of Nablus on the second Friday of the holy month of Ramadan, July 27, 2012. - REUTERS/Abed Omar Qusini

NABLUS, West Bank — The mosques in the old town of Nablus, in the north of the West Bank, reflect the history of the city across different eras, including the Islamic conquests, the Crusades and the Mamluk and Byzantine eras. While Islamic communities settled in Nablus following the Islamic conquests, a number of the city’s mosques are linked to Judaism and Christianity due to the presence of Christian and Samaritan communities in the city after the Byzantine era.

In this context, Jumaa al-Afghani, an official at the Palestinian Ministry of Awqaf in charge of Nablus' mosques, told Al-Monitor, “The city is home to 90 mosques, 11 of which are located in the old city and that are seen as some of the oldest in Palestine — dating back 600-1,000 years.”

He said, “Mosques are mainly located in the old city of Nablus because that area used to serve as a cultural center for a large number of Palestinian cities in the past. Before, the border of Nablus stretched out to the city of Acre. This is why most of the city’s mosques are considered national heritage.”

Al-Khadra Mosque reflects the different religious progressions in the city. According to archaeologist Naseer Arafat, the mosque was originally built as a Crusader church and was converted into a mosque during the Mamluk period.

The city's Samaritans possess documents showing that al-Khadra Mosque had been a Samaritan synagogue, where Jacob sat down and wept for his son Joseph. Following the Crusaders’ occupation of the city in 1099, it was turned into a church before being converted to a mosque during the Islamic conquest in 1187.

Arafat, who wrote a book titled "Nablus, the City of Cultures" about the history of the city, spoke of other mosques representing religious progressions in the city, including al-Salahi al-Kabir Mosque. He said, “The mosque used to be a Roman temple that was turned into a Byzantine church in the fourth century, a mosque in the first Islamic era in the seventh century and again converted to a church during the time of the Crusaders. During the conquest of Saladin Ayoubi 900 years ago, it was turned entirely into a mosque.”

Not far from it lies the an-Nasr Mosque. According to Arafat, the mosque was originally a Crusaders’ church, to which a minaret was added, before being turned into a mosque that was completely demolished in the earthquake in 1927. It was rebuilt in the same place and nothing was left of the church except the western interface, which underlies its archaeological aspect.

Similarly, al-Baik Mosque was also a Byzantine church turned into a mosque after renovations in 1745. Back then, the people of Nablus presented a petition to the city’s governor. To solve the dispute, the governor granted Christians land west of the old town to build another church, turning the previous one into a mosque in the 18th century.

For his part, archaeologist Abdullah Kalbouneh, the former director of the Restoration and Antiquities Department in the Palestinian Ministry of Antiquities and Tourism, told Al-Monitor, “Religious progressions in different parts of the world are a normal phenomenon. However, some of the churches in the city were linked to the ruling power at the time, without the actual presence of any Christians. Therefore, it was only normal to turn these churches into mosques under the Islamic rule.”

He said, “It was a mutual policy between Muslims and Christians to turn mosques into churches and vice versa, when occupying the city [of Nablus]."

Commenting on al-Khadra Mosque being linked to Judaism, according to some historical accounts, Kalbouneh said, “There is no conclusive evidence of the existence of Jacob [and him visiting al-Khadra Mosque]. These are only speculations by biblical advocates. The only unequivocal proof we have of a prophet’s tomb in Palestine is that of Prophet Ibrahim.”

He added, “The area where the mosque was built was home to some Samaritans, hence the Samaritan inscriptions on the stones used in the construction of the minaret, which also include the Ten Commandments of Moses."

According to Kalbouneh, the history of Nablus’ mosques is a microcosm of the history of the city, which has been associated with many religious faiths. Many of the places have been linked also to the names of different prophets, which binds the communities of the city to preserve them in honor of those prophets.

He said that the mosques were not completed during one era, but were destroyed and renovated several times in history. Hence, different architectural styles can be found in each mosque.

Arafat agreed with Kalbouneh in this regard, stressing that the architectural styles reflect every historical period, in addition to some visible stone inscriptions in some mosques, which indicate in which era they were built. This is the case, for instance, at al-Salahi al-Kabir Mosque, as every stone inscription indicates a different era of its construction.

Arafat pointed out that some of the mosques in the city are made of stones, dating back to ancient times, as is the case with the Hanbali Mosque; the Byzantine style and Roman pillars indicate that it was made of old stones, despite being built in the Ottoman era. He said, “In Nablus many buildings were made of stones from the ancient times. The current city was built on top of the ancient city.”

However, Afghani contradicted what Arafat and Kalbouneh said. He noted that one cannot confirm that these mosques were originally churches or synagogues. He argued that we can only be sure when the construction and reconstruction dates are inscribed into the stones. He said, “The stones can date back to ancient times and were used in the original construction. The city is old and was demolished and reconstructed over thousands of years.”

Whatever the credibility of these stories, it is clear for the visitors to the city's historic mosques that every stone is telling a story about the eras and religions that came to this city.