The Ottoman legacy in Palestine

In the historical Old City of Nablus in the West Bank, buildings from the days of the Ottoman Empire stand tall. 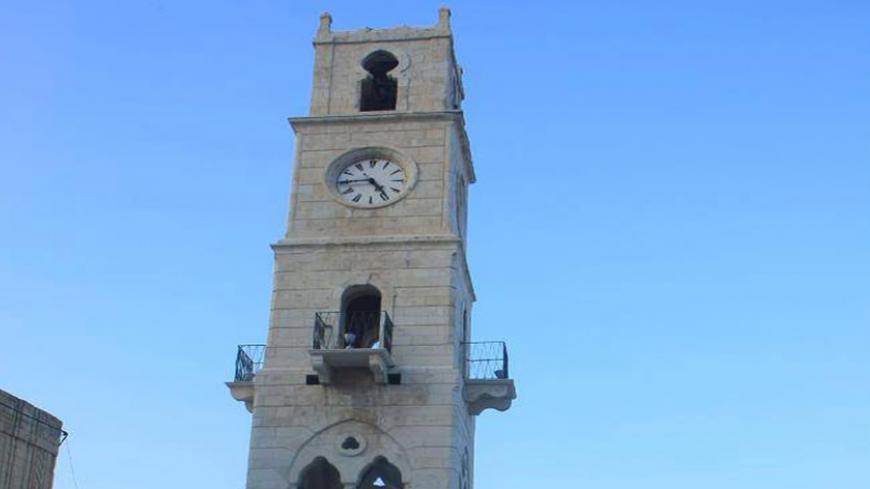 The clock tower stands as one of the most important historical Ottoman landmarks in the Old City of Nablus, Nov. 14, 2013. - FACEBOOK/Beam Engineering Technology

RAMALLAH, West Bank — In 1901, to commemorate the 25th year of enthronement of Sultan Abdul Hamid II in the Ottoman Empire, the sultan gifted 30 clock towers to the regions under the Ottoman state’s control. Palestine received seven of these, including the clock tower at the entrance to the Old City in Nablus, north of the West Bank.

The clock tower stands today as one of the most important touristic and historical sites in the city. It still functions, and it represents the central landmark of Nablus.

The sultan’s gift was considered the city’s guiding light and time reference for a long time. Even now, citizens set their watches according to the clock tower. The tower has stood its ground, like the others in Jaffa, Acre, Haifa, Nazareth and Safed. The seventh, which was erected in Jerusalem, was destroyed in 1922 during the days of the British occupation.

Clock towers — like some other historical Ottoman landmarks in Palestine such as schools, mosques and prisons — preserve the Ottoman architectural character. The Nablus clock tower is the only one of its kind in the West Bank, but it isn’t the only Ottoman building in the city.

The Old City is a small geographic area, with no new buildings or structures. Nablus' urbanization has only affected the Old City’s surroundings, in the north and east.

Naseer Arafat, an engineer and member of the Reconstruction Committee of the Old City of Nablus, said all the buildings are Ottoman except for two shrines that date back to the Mamluk period (1250-1517).

He further explained that there are underground constructions in the Old City, such as water and oil wells and water tunnels. He said, “These buildings were not affected by earthquakes, and some of them are still intact.”

The Old City suffered several earthquakes throughout history, the last of which struck in 1927. Most buildings that were erected before the Ottoman rule, during the Mamluk and Byzantine periods, were destroyed by earthquakes and rebuilt under the Ottoman rule.

Arafat distinguished between Ottoman governmental buildings that were built with purely Ottoman planning, funding and engineering and are still used for their original purposes, and buildings that the local citizens built at their own expense and used for civilian purposes during the Ottoman era. All of the civilian buildings were residential, and most remain such today, aside from 91 historical sites visited by tourists.

However, Arafat told Al-Monitor, “The [remaining] governmental buildings that were completely financed by the Ottoman government at the time included only two schools and the clock tower. One of the schools was destroyed by an earthquake that hit in 1927, while the Rashidiya School and the clock tower remain.”

Bechara said that Ottoman architecture is the traditional architecture in historical Palestine. This style of architecture started emerging in the 16th century and continued until the beginning of the British occupation in 1917. The architecture is characterized by the use of stones, thick walls, arches in doors and windows, and Crusader arches and domes in which the ceiling’s main column has the cross sign.

Bechara added, “Although this architecture has an Ottoman character, it still has a local aspect. For instance, clock towers in Palestine were different from those in Istanbul and the Balkans; they differed between cities depending on the influence of the local surroundings.”

According to Bechara, the Ottoman construction was modern and influenced by the West, but some oriental touches of local construction remained.

Ottoman architecture influenced Palestine more than any other occupational eras for two reasons. First, the Ottoman Empire ruled in Palestine for 400 years (1516-1915), and Palestine and Istanbul had a strong relationship. Some religious cities in Palestine, such as Jerusalem, Jaffa, Acre and Nablus, were administratively subordinated to the leadership in Istanbul, given its religious and geographical importance, as well as its central location between the eastern and western worlds.

Second, the cultural exchange between Palestine and Turkey was huge back then, and it could be seen in citizens’ taste in architecture. According to Bechara, 300 Palestinian students studied in Istanbul at the time.

According to Riwaq, 50,320 historical buildings were identified in 1994 in Palestine. Bechara said that only a few of those were built before the Ottoman era. This is because Palestine was rebuilt in the last 500 years according to Ottoman architecture based on the existing infrastructure from previous eras. For instance, the architecture in the Old City of Nablus was mostly Byzantine, but the buildings were destroyed due to the 1927 earthquake and rebuilt with an Ottoman character.

Bechara believes it is very important to preserve these buildings and restore them, as they constitute a historical reflection of civilizations that left their mark on Palestine. The Ottoman era was perhaps the most influential era regarding architecture.

According to Rami Sab Laban, deputy coordinator of Turkey's development aid program, the Turkish Cooperation and Development Agency (TIKA), funded by the Turkish government in Palestine is conducting restoration activities to preserve the Ottoman heritage in Palestine, especially the historical public buildings. The Nablus clock tower was renovated in December 2012 with funding from TIKA, as well as the Rashidiya School in May 2015, which was reopened thanks to the Turkish government’s efforts.

In addition to restoration activities, the agency supports student and cultural exchange between Turkey and Palestine and builds health- and education-related facilities in the West Bank and Gaza Strip.

Sab Laban told Al-Monitor that his agency accepts restoration applications for all historical buildings that have public use. However, more attention is given to historical Ottoman buildings specifically, and 10 have been restored so far in the West Bank.

In addition to the clock tower and the Rashidiya School in Nablus, Sab Laban said, the restoration activities include the Educational Directorate in Qalqilya; the Wall of Jerusalem near the Chain Gate or Bab al-Silsila; Sabil al-Sultan Abdul Hamid in Gaza, which is built on a water source that passers-by drink from for free; and the historical Ottoman building in Salfit that is currently used as a women’s center. The Bab al-Silsila minaret in Al-Aqsa Mosque was also restored, as well as Prophet Moses’ building in Jericho.

Perhaps this interest in restoring Turkish buildings in Palestine reflects the Ottoman era’s influence on Palestinians, not only in terms of construction, but in all aspects of life. The Turkish influence spans to food, habits and words that entered their language and are still spoken today.