A trip down memory lane in this ancient neighborhood of Nablus

A tour in al-Yasmineh (Jasmine) neighborhood in the old city of Nablus takes you to the different civilizations that have passed through Palestine over the centuries. 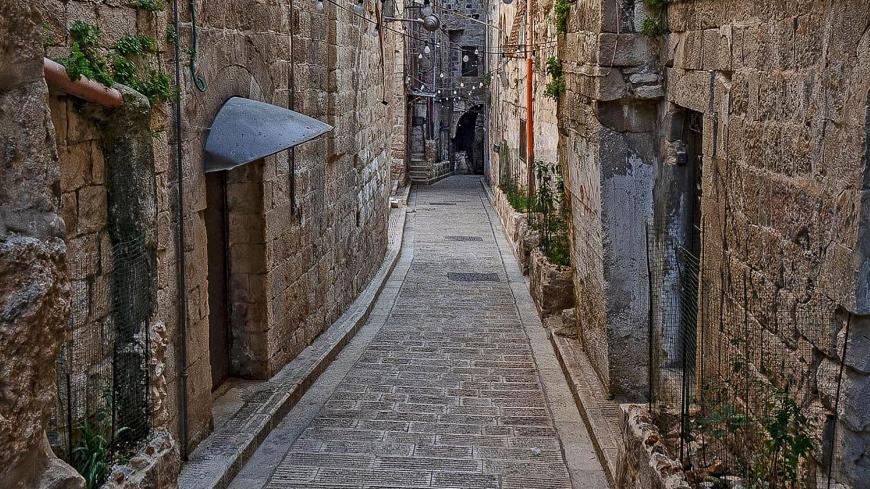 A street in al-Yasmineh neighborhood of Nablus, West Bank. - Facebook/AhmadKhalafPhotography

The scent of jasmine fills the senses, the narrow alleys and old buildings in al-Yasmineh neighborhood in the southwest of the West Bank’s old city of Nablus. The neighborhood is named after the sweetly scented jasmine flower that is widely spread there and is locally known as Little Damascus to emphasize the Levantine-style similarities and prevailing Mamluk and Ottoman architectures.

Nestled in one of the neighborhood’s corners is the well-known Breek herbal shop that dates back more than 400 years ago. Herbal products, seeds, spices and authentic Arabic coffee are sold at Breek. There is also an antiquities shop inside Breek displaying hundreds of antiquities such as ancient printing machines and phones, embroideries, and a variety of traditional Palestinian necklaces, bracelets and rings in this corner of al-Yasmineh that is so dear to visitors and tourists in the old city of Nablus.

Saleh Awad, head of the Department of Licenses and Inspections at the Directorate of Tourism and Antiquities in Nablus, told Al-Monitor, “Al-Yasmineh neighborhood is characterized by the diversity of civilizations that passed through the neighborhood, starting from the Roman to the Byzantine empires, the Crusades, to the Mamluk and Ottoman periods in the mid-17th and 18th centuries. The Ottoman and Mamluk architectural styles prevail in the neighborhood.”

“There are seven intersecting neighborhoods in the old city of Nablus, namely al-Hableh, al-Yasmineh, al-Qaryoun, al-Gharb, al-Qaisariyya and al-Faqos. They house a number of archaeological and historical monuments. The seventh neighborhood is al-Aqabeh where the largest Roman amphitheater in the Palestinian territories is located. It is a theatre with a diameter of 100 meters, and it dates back to the second half of the second century,” Awad said.

He added, “There are also some ahwash (central courtyards) and public baths in the [old city] such as Hammam al-Qadi and Hammam al-Hana, which can be traced back to more than 2,000 years ago. [The latter] was built by the Samaritans in the heart of al-Yasmineh neighborhood. The public baths retain their ancient characters and are significant attractions for many local tourists, the Arabs of Israel as well as for international visitors.”

“More than 30,000 people reside in the old city of Nablus, including the seven neighborhoods. It is viewed as an archaeological and historical uncovered museum, housing more than 550 ancient monuments and sites that reflect the succeeding civilizations,” he said.

Awad explained, “The Ministry of Tourism and Antiquities, in cooperation with the Municipality of Nablus and a number of institutions such as Taawon Association, are working to preserve and revive the old city of Nablus by rehabilitating and restoring it so as to boost tourism. [The works] include turning some of the ancient soap factories into restaurants, and a 2012 project to restore a number of old houses in Hosh al-Atout in cooperation with Taawon and with support from the Arab Fund for Economic and Social Development, with a total cost of $1.1 million.”

Awad said the Municipality of Nablus, in cooperation with the Italian Agency for Cooperation and Development, restored in 2003 Khan al-Wakaleh, which was built in 1630 to serve as a place where pilgrims and traveling caravans would stop for breaks. It was turned into a hotel for visitors and tourists.

Archaeological expert and former director of the restorations department at the Ministry of Tourism and Antiquities Abdullah Kalbouneh told Al-Monitor, “Al-Yasmineh neighborhood, also known as Little Damascus, was built by the Romans in 72 AD. It is a 1,000-meter-long neighborhood where Samaritans, Muslims and Christians used to live. The Samaritans later moved to Jabal et-Tur (Mount Gerizim) in the 1960s.”

“Satoun Mosque is the most prominent monument in the neighborhood and one of the oldest mosques in Nablus. It was built under the rule of Umar ibn al-Khattab. [Also prominent are] al-Khadra mosque, the Turkish al-Hammam al-Samra, other palaces such as Abd al-Hadi Palace, and the palaces of al-Kilani and al-Shalbak families,” Kalbouneh added.

“Moreover, there is Hosh al-Atout, which consists of 26 houses and is known for its long corridors. It was a witness to the Palestinian struggle under the rule of late President Yasser Arafat, who used to hold his secret meetings there in the 1960s,” he said.

He continued, “A number of houses and parts of al-Khadra Mosque in al-Yasmineh neighborhood were destroyed by the Israeli bombing during the Israeli invasion of the West Bank in 2002. Some of the neighborhood’s residents moved to other parts of the Nablus governorate, although it boomed following its restoration and rehabilitation. Even though it is a place worth living and residing in, they decided to leave to wider places with modern architecture, particularly since the families grew bigger.”

Ahmad Chkeir, 67, a resident of al-Yasmineh neighborhood, believes “family and social relations are what distinguish the neighborhood. It has a diwan (reception room) where all of the families’ events and occasions are held, which shows the familiarity among the residents and love they share.”

He said, “Some customs are preserved in the neighborhood; for instance, the residents celebrate Mawlid (Prophet Mohammed’s birthday) and other Islamic holidays by decorating the streets and alleys with strings of lights and setting up food festivals. The residents also celebrate the Shaabouniyeh event where the family’s mayor invites all of the tribe’s men, women and children to a lunch feast during the Muslim month of Shaban, which precedes the holy month of Ramadan. These events are only held in the neighborhoods of the old city of Nablus.”

He recounted that “many families were forced to leave the old city to other, more urban parts of the Nablus governorate, to areas that are easier to move around in and that are close to all vital institutions and centers, after the 1927 earthquake that demolished dozens of the neighborhood’s houses.”