A family of collectors from Nablus has single-handedly created a museum of more than 5,000 pieces that reflect Palestine’s heritage since the Canaanite period. 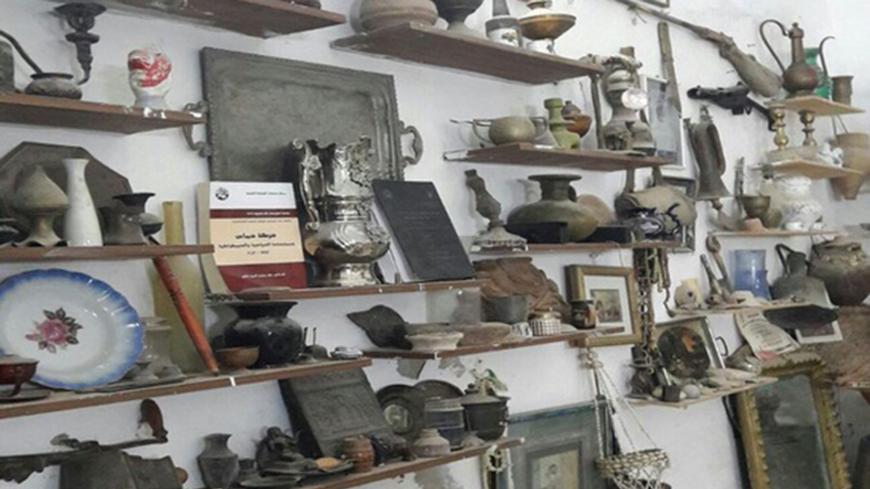 A small selection of The History Museum of Palestine, or Barqa Museum, Nablus, West Bank. - Courtesy of Barqa Museum

NABLUS, West Bank — Northwest of Barqa, about 18 kilometers (11 miles) from Nablus, lies a private museum that brings together more than 5,000 historical objects that were collected by a Palestinian family over a period of nearly half a century.

The History Museum of Palestine, or the Barqa Museum as city residents call it, houses everyday items once used by Palestinians, such as old coins, pottery and manuscripts that date back to Canaanite, Roman, Byzantine, Greek, Islamic, Mamluk and Ottoman eras.

It also houses a library that includes over 1,200 books on the ancient civilizations of Palestine.

“The two-story museum founded over 40 years ago is 150 square meters [1,614 square feet],” Muntasser Salah, the owner of the Barqa Museum, told Al-Monitor.

Salah said the museum contains 5,500 items, from the Canaanite period to objects used in daily life in Palestine in the past century.

Salah added, “The [items] in the museum were collected over 35 years ago by my father and before that by my grandfathers. Then I continued collecting and buying historical pieces from other amateur collectors and Palestinian families at my own expense and exhibited them in the house that was turned into a museum. The collection includes banknotes, old Palestinian coins and keys of old houses forcibly abandoned by their dwellers following the 1948 Palestinian exodus.”

He called for financial support from government authorities to protect the rare and fragile pieces such as banknotes, coins and clay pottery. “[These] need to be stored in protective glass [display] cases like those used in international museums. I hope that a large historical museum will be constructed with the help of international and governmental institutions. I would like the museum to be listed as a UNESCO World Heritage Site,” Salah said.

Youssef Tbaileh, a researcher and expert on archaeology and Islamic history, told Al-Monitor, “The Barqa Museum houses metal items as well as clay and copper pottery that date back to the fourth and fifth centuries. Moreover, there are archaeological items dating back to the different eras that Palestine has witnessed in the past,” such as bronze and copper coins from the Roman, Byzantine and Ottoman eras.

He added, “Most archaeological and heritage sites in the West Bank are under constant Israeli attacks and Israel doesn't allow the Palestinians to engage in any restoration or rehabilitation works of those sites under the pretext that they fall within the territories controlled by Israel, not to mention stealing these archaeological items and claiming that they belong to the Israel Antiquities Authority and that they do not belong to the Palestinians.”

Tbaileh stressed the need for the Ministry of Education, in coordination with the Ministry of Tourism and Antiquities, to organize cultural visits for high school and college students to educate them about Palestinian heritage and museums.

The Barqa Museum is located in Area C, which is under Israeli control. This area constitutes 61% of the land of the West Bank, according to the administrative division set out in the Interim Agreement on the West Bank and the Gaza Strip known as the 1995 Oslo II Accord between Israel and the PLO.

Anwar Oudeh, a student at the Faculty of Tourism and Archaeology at An-Najah University in Nablus, told Al-Monitor, “The Barqa Museum is an important center of education and knowledge. It is also rich in rare archaeological and historical items that show the greatness of the ancient eras and civilizations that Palestine witnessed centuries ago.”

Oudeh added, “The museum preserves many Palestinian archaeological items and tools, such as khabeya [a container that resembles an amphora used in the past to preserve olive oil, wheat and barley] and other tools that show how people used to live in Palestinian villages.”

Mohammed Jabber of the village of Bizzariya in the northern West Bank near Nablus told Al-Monitor, “The museum is a cultural and civilizational achievement and source of pride to Nablus in particular and Palestine in general, with its wide collection that promotes Palestinian culture and history.”

He said, “Whoever visits the museum remembers the old houses of their father and grandfathers. The construction and design of the building and the collections [create a very authentic atmosphere] and reflect the history of the great Palestine," adding that the collections carry this heritage to the present.

There are 31 museums in Palestine, including 26 in the West Bank and five in the Gaza Strip.

The number of visitors to those museums in 2016 was 206,046, including 159,261 Palestinian visitors and 46,785 visitors from foreign countries. Heritage museums had the lion’s share of visitors, 61,762, according to the Palestinian Central Bureau of Statistics.