How one Gazan is preserving Palestinian heritage in his basement

To protect Palestine's archaeological history, Marwan Shahwan has converted the basement of a Gaza house into a museum to hold the tens of thousands of artifacts he has been collecting for decades. 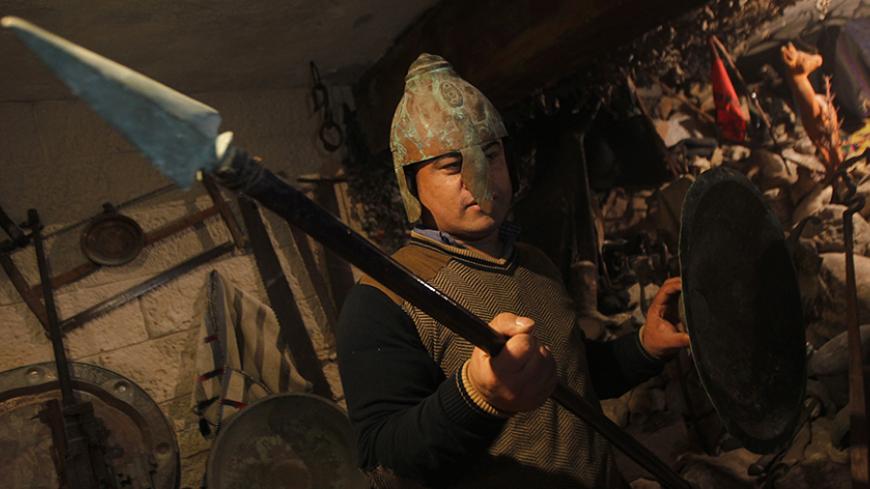 A friend of Marwan Shahwan displays relics from his collection stored in a basement in Khan Yunis, Gaza Strip, March 2, 2014. - SAID KHATIB/AFP/Getty Images

KHAN YUNIS, Gaza Strip — Palestinian citizen Marwan Shahwan has turned the basement of his Khan Yunis home into an archaeological museum. His private exhibit features 10,000 artifacts collected over 30 years that attest to the history of the seven civilizations that called Palestine home: the Pharaonic, Greek, Romanian, Byzantine, Islamic, Mamluk and Ottoman civilizations.

He bought his first archaeological find in the 1980s from a popular market. It is a copper teapot that an archaeologist later on told him was a valuable artifact dating back to the Ottoman era. A carpenter and interior designer, Shahwan designed and built a museum to house and display his artifacts.

Shahwan told Al-Monitor that he was encouraged to collect archaeological pieces by stories his grandfather told him about an Israeli officer named Moshe Dayan, who had been buying large amounts of artifacts after the 1967 war and labeling them as part of Israel’s history. He added, "This pushed me to collect antiquities, as I wanted to preserve Palestinian heritage."

The archaeological museum, the largest in Gaza, contains a variety of pieces including rare stones and coins, as well as a historical copy of the Quran from the Islamic Golden Age.

Shahwan allocated a corner of the museum for Palestinian heritage. The display includes Palestinian women's outfits before the Palestinian Nakba in 1948, musical instruments used in wedding celebrations and old farming tools, including an ancient pottery water jar and a Pharaonic mill.

In another corner, he displays ancient weapons dating back to the Ottoman Empire and others used in World War I and World War II, in addition to lead ammunition boxes dating to the British Mandate. Shahwan also keeps a stone statue of Alexander the Great. His artifacts are priceless, he says.

He noted that the museum has become a destination of many tourists who visit the Gaza Strip, adding that diplomatic delegations have also visited, including the Norwegian ambassador and China’s minister of information, in addition to students, researchers and foreigners interested in archaeology.

Shahwan said he spends most of his time buying and collecting archaeological pieces. He hopes that the authorities will take action to support museums and their owners, as their work is vital to preserving the historical evidence of a unique Palestinian identity.

He indicated that he often buys items from traders who are unaware of their real value.

Shahwan looks forward to one day opening a larger museum and participating in international archaeological exhibitions outside the Gaza Strip to display his archaeological pieces from the various civilizations that inhabited Palestine.

Gaza historian Nasser al-Yafawi spoke highly of Shahwan’s museum, saying that it features treasures from Palestine’s ancient civilizations. He said it features a set of clay jars dating to various periods, including the Roman, Byzantine and other Islamic civilizations.

He warned, however, “The museum is in dire need of special tools to preserve the archaeological pieces.”

Yafawi stressed to Al-Monitor the importance of projects like Shahwan's at a time when Palestinians are fighting a cultural and historical heritage battle with Israel. He added, “These archaeological components must be employed for our cause to preserve Palestinian heritage. They must be exhibited at a comprehensive national museum, as they are proof of the civilizations that were present in Palestine at different points in history.”

He called on educational institutions in the Gaza Strip to organize educational visits to archaeological museums to enrich the students’ sense of history.

He added that while such a museum is considered private property, its owner is not entitled to sell or dispose of any of the displayed items without working with the ministry. “These [artifacts] are the state’s properties that must be preserved,” he said.

Barsh noted that the ministry is looking to create a national museum in the Gaza Strip, but is hindered by a lack of financial resources and high construction costs. The ministry currently owns two museums, Basha Palace Museum and the Museum of Deir al-Balah in central Gaza.

Gaza is one of the oldest cities in the world, founded by Arab Canaanites around the third millennium BCE. Arabs called it Hashim after the grandfather of the Prophet Mohammed, Hashim bin Abd Manaf. Across the various stages of history, it was a transportation hub for travelers and convoys and a global trade center.

Egyptians came up with the name “Gaza Strip” when the region fell under Egypt's sovereignty following the Egyptian-Israeli armistice agreement in 1949.

Tourism in Gaza relies heavily on archaeological and historical sites, some of which date back thousands of years. There are 150 recognized ancient houses in the Gaza Strip, 20 historic mosques, three churches, an ancient market, one ancient fountain and two prayer rooms, in addition to 15 other archaeological sites. Antiquities in the Gaza Strip are at high risk of not only neglect but outright destruction, as Israeli military forces often target them.