Egypt is trying to attract Saudi tourists by holding an exhibition of Egyptian Islamic antiquities in Saudi Arabia, which includes 84 artifacts from the collections of Islamic art in Cairo. 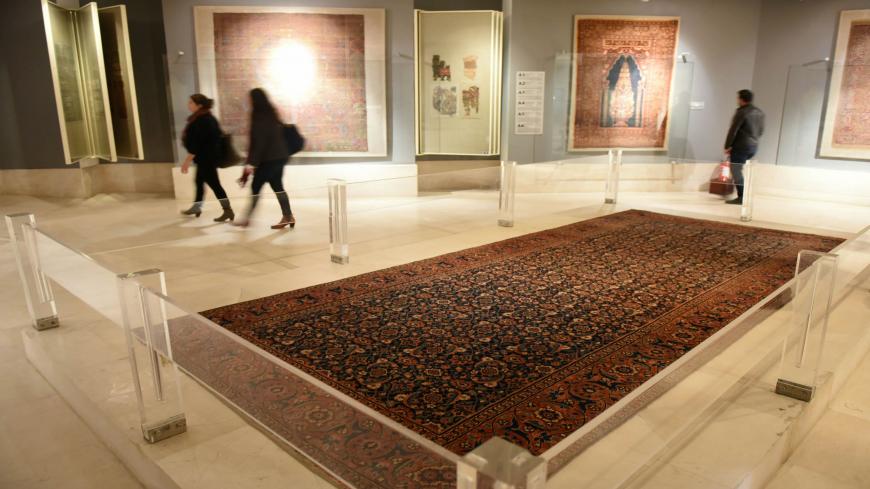 People visit the Museum of Islamic Art after it reopened to the public, Cairo, Egypt, Jan. 19, 2017. - MOHAMED EL-SHAHED/AFP via Getty Images

CAIRO — Egypt’s Supreme Council of Antiquities signed an agreement Nov. 9 with the Saudi Aramco company, to hold the first Egyptian artifacts exhibition in Saudi Arabia. According to the agreement, Egypt will lend 84 artifacts from the Museum of Islamic Art in Cairo to the King Abdulaziz Center for World Culture (Ithra) in the Saudi city of Dhahran for a period of two years, to be displayed at an exhibition titled “Bisector of the Mosque.”

The exhibition will include several archaeological pieces dating back to the ninth century, which will be provided by the National Museum in Riyadh. In addition, the artifacts to be loaned by Egypt include parts of historical mosques such as pulpits, mihrabs and prayer rugs, as well as other pieces that reflect the development of mosques throughout the ages.

The Egyptian Ministry of Antiquities announced Nov. 5 that the exhibition will be held in December at the Ithra center in Dhahran.

On Sept. 17, the Egyptian Cabinet had approved the temporary exhibition. The Cabinet said in a statement that the exhibition will include 84 artifacts from the collections of Islamic art in Cairo.

The Ithra center is located in Dhahran, in the Eastern Province, and includes a number of galleries, archaeological museums and a library with 250,000 books.

Commenting on the exhibition, Egyptian Minister of Antiquities and Tourism Khaled al-Anani said in a press statement Oct. 4 that in addition to Egypt, six other Islamic countries will also be taking part in the upcoming exhibition. He did not name those countries.

He continued that the exhibition will be held in Saudi Arabia for a period of two years, after which it will be moved to Egypt in November 2022.

During a Sept. 17 meeting, Anani discussed with his Saudi counterpart, Ahmed bin Aqeel al-Khatib, special arrangements for holding another exhibition of Egyptian antiquities in Riyadh. Khatib asserted that Saudi tourists feel the warmth and hospitality shown by the Egyptian people during their visits to Egypt. He pointed to the proximity between the two countries, while praising the Egyptian tourism and archaeological components that encourage Saudi citizens to visit Egypt.

Egypt and Saudi Arabia had signed a memorandum of cooperation in 2016 to enhance mutual cooperation in the field of antiquities and museums. The memorandum included holding lectures, international seminars and workshops related to antiquities, museums and urban heritage.

In 2018, Anani and then-Chairman of the Saudi Commission for Tourism and National Heritage Prince Sultan bin Salman discussed the activation of the 2016 bilateral memorandum of cooperation. They agreed on exchanging temporary exhibitions on Islamic art in both Cairo and Riyadh.

The head of the museums department at the Ministry of Tourism and Antiquities, Moamen Othman, told Al-Monitor, “Egypt is discussing with the Saudi side the recent preparations for holding the Islamic archaeological exhibition in Dhahran next month that will last two years.”

He said, “Cairo will be showcasing Islamic artifacts at the Ithra center in order to attract Saudi tourists and encourage them to visit Islamic museums in Egypt.”

Othman argued that Gulf countries are interested in Islamic antiquities that express Islamic history throughout various civilizations. “Egypt is keen to display its Islamic artifacts, specifically in the Gulf countries. Meanwhile, Saudi Arabia is very interested in hosting a number of Egyptian archaeological exhibitions in the coming period. This will boost tourism and archaeological cooperation between the two countries.”

Raafat al-Nabrawi, former dean of the Faculty of Archaeology at Cairo University, told Al-Monitor, “Egypt's approval of the archaeological exhibition in Saudi Arabia will boost tourism. This sector has been declining and was crippled by the coronavirus pandemic.”

Nabrawi said that the Gulf states, especially Saudi Arabia, show a real interest in the Islamic monuments in Egypt and other Islamic countries, more than Pharaonic antiquities. “Egypt has been interested in holding archaeological exhibitions in Europe and the United States. It recently showed interest in exhibiting its artifacts in Arab countries, especially in the Gulf countries.”

In a press statement in October, Anani said, “Saudi Arabia is ranked among the five largest markets of tourists to Egyptian tourist destinations.”

He added, “The Egyptian Ministry of Antiquities should expand exhibitions in the Gulf countries and develop a plan to display Islamic artifacts in Saudi Arabia, the United Arab Emirates and other Gulf countries.”

Abdel-Basir noted that Egypt is competing with Turkey, which in turn is trying to attract Gulf tourists with its own Islamic monuments. “The first Egyptian exhibition of Islamic antiquities in Saudi Arabia is a step ahead in Egypt's competition with Turkey when it comes to Islamic tourism and attracting tourists from the Gulf countries.”

Abdel-Basir believes Saudi Arabia and Egypt will be exchanging more archaeological exhibitions, especially since the people of the two countries are interested in Islamic antiquities.