The Egyptian Ministry of Tourism and Antiquities is implementing a project to restore the Great Hypostyle Hall in Karnak Temple in Luxor, in a bid to reveal the original colors of the Pharaonic inscriptions and subsequently draw more tourists and increase the country’s revenues. 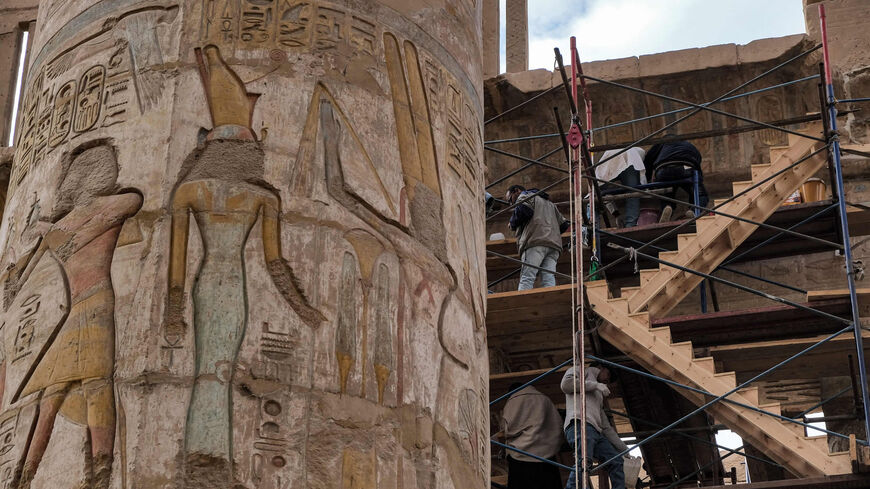 Conservationists restore some of the hieroglyphic murals along the roof of the Great Hypostyle Hall next to a column bearing a representation of the Egyptian god Amun-Min in the Temple of Karnak, Luxor, Egypt, Jan. 17, 2022. - Amir Makar/AFP via Getty Images

CAIRO — The Egyptian Ministry of Tourism and Antiquities is restoring the Great Hypostyle Hall in the Karnak Temple complex in Luxor, with the aim to reveal the original colors of the Pharaonic inscriptions.

During a tour of the site Nov. 10, Mostafa Waziri, secretary-general of the state-owned Supreme Council of Antiquities, said that the renovation project aims to “remove the dirt and calcification that has accumulated over the years on the walls and columns of the Great Hypostyle Hall in Karnak Temple, and to reveal the original colors of the inscriptions.”

He noted, "The restoration work is in full swing according to a timeline to finish the project as soon as possible,” without explicitly specifying the official date for the completion of the project.

Waziri explained, “The project comes as part of the Ministry of Tourism and Antiquities’ plan to boost the tourism sector with the start of the winter tourist season and the preparations by Luxor governorate to receive visitors from Egypt and around the world.”

According to Waziri, work is currently underway on the second phase of the project to restore the Great Hypostyle Hall, after the first phase was completed in 2021 with the restoration and display of the original inscriptions of 28 of the 134 columns in the hall.

Saadi Zaki, director-general of the Restoration of Upper Egypt Antiquities and Museums at the Ministry of Tourism and Antiquities, told Al-Monitor, “The project to restore the Great Hypostyle Hall is being carried out by a team of 30 Egyptian archaeologists from the ministry.”

He said, “The idea for the project to restore the columns came during a visit conducted by Prime Minister Mustafa Madbouly to the Karnak Temple complex in 2021."

“At the time, the premier recommended the restoration of the columns as the original inscriptions were fading, and so we did. We are currently working on restoring 25 columns in the southern side of the hall, in the hope of restoring all of the 134 columns inside the hall, to reveal the original inscriptions that bear great historical value,” Zaki noted.

He added, “There are many challenges facing the restoration team, as the columns are 22 meters [72 feet] each. Some of our female restorers have to climb up to the highest point to be able to do their jobs. Everyone is putting great effort in this project.”

Zaki explained, “The restoration process begins with the mechanical cleaning of dust and dirt, as well as chemical cleaning using internationally used chemicals so that the original colors and inscriptions are not affected."

Abd al-Rahim Rayhan, archaeological expert and member of the History and Antiquities Committee of the Supreme Council of Culture, told Al-Monitor, “The Great Hypostyle Hall in the heart of the Karnak Temple complex is the largest colonnade in the world, and it was built over several periods, during the eras of several kings — beginning with King Amenhotep III who ordered the construction of the two main corridors made up of 12 columns, and then King Seti I who completed the construction of 122 columns, bringing the total number of columns to 134.”

He said, “All the columns are in the form of papyrus buds. During the reign of King Ramses II, his name was engraved on all of them inside the hall. The columns also bear drawings of the victories of King Seti I and King Ramses II."

Hussein Abdel-Basir, director of the Antiquities Museum at the Bibliotheca Alexandrina, agreed with Rayhan, telling Al-Monitor, “The Great Hypostyle Hall is one of the largest and most beautiful halls in Karnak Temple, because it is similar to the Vatican in ancient Egypt. It was a sacred place of great significance to all Egyptian kings throughout ancient times.”

On the importance of restoring the columns, Abdel-Basir explained, “This is necessary to bring out the inscriptions and colors that show the beauty of ancient Egyptian art and the colors that were used in its inscriptions and drawings. This project is not limited to Karnak only, as the Ministry of Antiquities had previously implemented restoration for a number of temples in Upper Egypt, such as Esna Temple.”

In September, the Egyptian Ministry of Tourism and Antiquities announced the success of the joint Egyptian-German archaeological mission in uncovering several inscriptions, drawings and colors located in the southwestern part of the roof of Esna Temple in Luxor governorate, which were revealed for the first time after the completion of restoration and cleaning work.

Abdel-Basir stressed, “The restoration of the columns at the Great Hypostyle Hall in itself represents a great addition, because the Karnak Temple complex consists of antiquities of great importance. Many tourists come to visit the temple. Upon the completion of the restoration works, we expect a large tourist turnover and the project will have a high touristic turnout and therefore higher revenues.”

He also pointed out, “The restoration of archaeological areas, including the columns at the Great Hypostyle Hall, comes within the government’s plan to increase the revenues from the tourism sector, which aims to attract 30 million tourists by 2030, in a bid to contribute to increasing the country’s national income.”

The Egyptian government aims to increase its revenues from tourism to $30 billion annually, compared to about $9 billion during the past year, according to a statement by Madbouly in September.