The Egyptian Ministry of Tourism and Antiquities announced the completion of restoration works at the Golden Shrine in the Temple of Habu in Luxor, built in memory of King Ramses III. 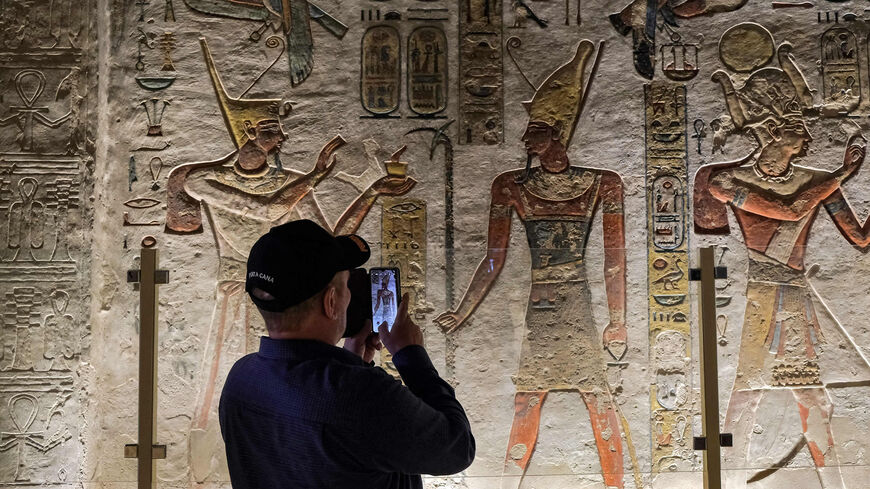 A visitor takes pictures of the hieroglyph-adorned walls in KV11, the Tomb of Pharaoh Ramses III, at the Valley of the Kings on the West Bank of the Nile River, Luxor, Egypt, Jan. 18, 2022. - Amir Makar/AFP via Getty Images

CAIRO — The Egyptian Ministry of Tourism and Antiquities announced Aug. 4 that it had finished restoring the Golden Shrine in the Temple of Habu on the western bank of Luxor governorate in southern Egypt.

The secretary-general of the Supreme Council of Antiquities, Mustafa Waziri, was quoted in the ministry’s statement as saying, “The restoration work was carried out by Egyptian restorers affiliated with the Supreme Council of Antiquities. The work revolved around fixing the damage caused by erosion and passage of time, allowing the shrine to regain its original golden color.”

According to the Ministry of Tourism and Antiquities’ website, “The Temple of Habu is a temple commemorating King Ramses III. Ancient Egyptians called it Hat Ghanmat Ha, which means the temple united with eternity. It is characterized by its beautiful inscriptions, a shrine for King Ramses III and several others, including the Golden Shrine.”

Ahmed Badran, professor of archaeology and ancient Egyptian civilization at Cairo University, told Al-Monitor over the phone, “This shrine was called the Golden Shrine because it bears scenes and colorful inscriptions on its walls that represent rings of gold, and it is believed that the temple’s treasures and gold bars were kept inside it.”

Hussein Abdel Basir, director of the Antiquities Museum at Bibliotheca Alexandrina, told Al-Monitor, “The Golden Shrine in Habu Temple has many golden inscriptions. Although the temple includes many shrines, the Golden Shrine is the most important, most beautiful, most artistic and the most interesting one for archaeologists.”

Badran added, “The temple in general is one of the most important and unique temples in ancient Egyptian civilization, because it has inscriptions on its outer walls that represent the ancient Egyptian calendar. The inscriptions also include all the feasts, specifying the date and the sacrifices that were being offered and by whom, in addition to inscriptions related to the wild and river hunting carried out by the king. These inscriptions served to eliminate evil and show the king’s power.”

The Ministry of Tourism and Antiquities’ website mentioned that the temple was painted with a warlike color, influenced by the battles fought by King Ramses III.

Abdel Basir pointed out, “There are unique and important scenes on the outer wall of the Temple of Habu that are not found elsewhere. They are specific to the naval battle that King Ramses III fought, and in those scenes King Ramses III appears standing on the seashore and shooting an arrow toward the enemy fleet of the Sea Peoples. The latter were a group of tribes who were like pirates in the Mediterranean region who wanted to attack Egypt and plunder its wealth, but Ramses III succeeded in confronting them.”

He added, “Restoring the Golden Shrine is very important to attract tourists, especially since it has wonderful scenes and attention-grabbing bright and beautiful colors. Now that it has been restored, tourists can enjoy looking at this ancient monument in its original splendor.”

Badran noted, “The restoration of the Golden Shrine in the Temple of Habu and other archaeological projects in Upper Egypt increases tourist demand for the temples in Luxor. The antiquities sector has witnessed an unprecedented interest from the Egyptian government in recent years, with the latter implementing various projects to restore archaeological sites and temples, especially in Upper Egypt; for example, restoring and highlighting the colors of Esna Temple in southern Luxor in May.”

He added, “Restoring antiquities and presenting them in their best form has a great return for tourism promotion, especially since there is a great interest and passion for ancient Egyptian civilization, which ultimately increases the national income generated from the tourism sector.”