After restorations that began two years ago by the joint Egyptian-German mission, the Esna Temple on the Nile banks finally appeared in the original colors it bore 2,000 years ago. 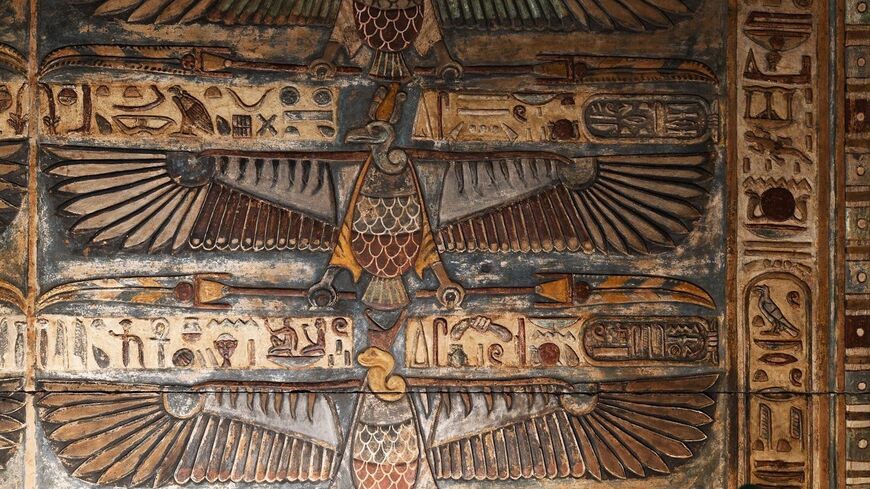 An inscription from the Esna temple. - Egyptian Ministry of Tourism and Antiquities

CAIRO — The joint Egyptian-German archaeological mission working on the restoration of the Temple of Esna, which sits on the west bank of the Nile 55 kilometers (34 miles) to the south of Luxor, has unveiled, for the first time, the inscriptions, reliefs and colors of the temple’s ceilings and walls after completing restoration and cleaning works.

Secretary-General of the Supreme Council of Antiquities Mustafa Waziri explained in a press statement May 15 that the restoration and cleaning works at the temple unveiled the original and bright inscriptions and colors found under the ceiling above the temple entrance, which is located at a height of 14 meters (46 feet).

He stressed that no relief or picture of this ceiling had previously appeared in the scientific publication of the French Egyptologist Serge Soniron, who documented and photographed the temple inscriptions and engravings between 1963 and 1975.

Hisham el-Leithy, head of the Central Administration for the Registration of Egyptian Antiquities and head of the Egyptian archaeological mission, said in a press release that the temple’s colorful inscriptions have suffered over the past centuries from the accumulation of thick layers of soot, dust and dirt as well as the remains of birds, bats and spiders’ nests. They also suffered from the accumulation of calcium salts over the course of about 2,000 years.

He continued, “This called for the launch of a restoration and development project for the temple to preserve it and its unique and distinct inscriptions, and to preserve this unique monument dating back to the Roman era with funding from the American Research Center in Egypt.”

Hussein Abdel Basir, director of the Antiquities Museum at Bibliotheca Alexandrina, told Al-Monitor that the Temple of Esna is one of the most important Greco-Roman temples of the Ptolemaic period.

He said that the temple inscriptions bore dirt accumulated over time due to the remains of birds. In addition, there were periods when the Copts used the temple as a haven to escape from Roman persecution, which contributed to the accumulation of black dust due to the use of candles and some oil materials for lighting and heating. This, he added, led to the distortion of these inscriptions.

Abdel Basir pointed out that this type of restoration was previously carried out in the Temple of Dendera in Qena governorate in Upper Egypt.

He noted, “While the inscriptions do not reveal new discoveries, they have become [clearer], allowing us to clearly read the hieroglyphs on the walls. Thus further confirming the previous interpretations of these writings, and allowing the contemplation of the colors that still retain their luster despite the passage of thousands of years.”

The Temple of Esna is located in the heart of the ancient city of Esna in southern Egypt. Its Greek name was Latopolis, meaning the city of latus fish. King Ptolemy Philometer built the current temple on the ruins of the temple of King Thutmose III, and it was not until 400 years later that its construction was completed, toward the end of the Roman era. The Esna Temple was dedicated to the worship of the Trinity Khnum, Neith and Menhet.

The temple, whose restoration began two years ago, consists of a hall of columns with 24 beautifully decorated pillars. It is one of the most beautiful column halls in Egypt and is linked to a port on the Nile whose remains are still visible, as per the website of the Egyptian Ministry of Tourism and Antiquities.

“Judging by the design of the temple, there seems to be a part of it that is still buried under the sand and that is yet to be discovered,” he said.

He noted that the city of Esna was called Tasni in ancient Pharaonic days, and later Latopolis, which is a Greek word meaning the Nile Lates niloticus (white-shelled fish), which was sanctified in the city at the time.

Shammaa said that when the Greeks occupied Egypt, they tried to get closer to the Egyptians by building temples for ancient Egyptian gods and deities following the Egyptian style with some Greek additions. At the time, they built several temples on the ruins of other temples, including the Esna, Kom Ombo and Philae temples.

He pointed out that the inscriptions and drawings of the Esna Temple have been clear since the 1980s, but were not in such bright colors. So restoring and revealing the true colors of the temple fulfills the dream of seeing the temple the way it was thousands of years ago.

Shammaa concluded that this step breathes new life into the temple, and these restorations will be impressive for those who are eager to see colors that have managed to weather long years of decay and that can consequently boost the tourism sector if well exploited and promoted.