An Egyptian archaeological mission has discovered a tower house, in addition to the remains of a Ptolemaic temple and about 85 tombs dating back to different periods from the end of the Old Kingdom until the end of the Ptolemaic period in Sohag, southern Egypt. 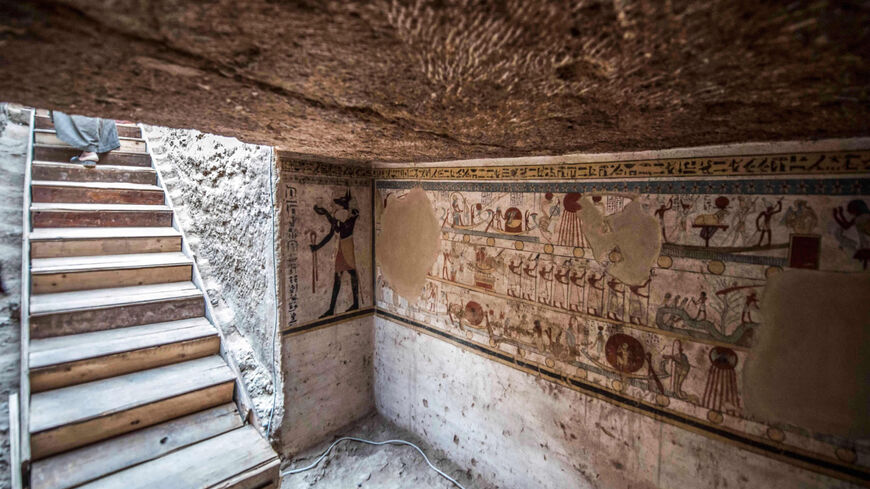 The entrance is seen inside a newly discovered tomb dating to the Ptolemaic era at the Diabat necropolis near the city of Akhmim, Sohag province, Egypt, April 5, 2019. - Khaled Desouki/AFP via Getty Images

CAIRO — The Egyptian Ministry of Tourism and Antiquities announced in a May 4 press statement the discovery of a tower house from the era of King Ptolemy III, in the Gabal El Haridi area in Sohag governorate in southern Egypt.

The Egyptian archaeological mission operating in the area also unearthed the remains of a Ptolemaic temple, parts of which were discovered during previous excavations in the early 2000s.

Secretary-General of the Supreme Council of Antiquities Mostafa Waziry explained in a statement published on his Facebook page May 4, “The checkpoint discovered is a mud-brick structure (Tower House) which was built to observe and watch the traffic between nomes borders, collect taxes and secure the boats sailing the Nile.”

He said the temple was dedicated to the goddess Isis durring the era of King Ptolemy III (Euergetes) and it is 33 meters (108 feet) long and 14 meters (46 feet) wide, with an axis from north to south.

The ministry statement quoted Ayman Ashmawy, head of the Egyptian Antiquities Sector at the Supreme Council of Antiquities, as saying, “The temple consists of an open rectangular hall with four columns in the middle, followed by a transverse hall with two columns in the middle leading to the Holy of Holies, with a staircase on the west wall. The floor of the temple was formed of stone tiles from local limestone.”

The ministry said in its statement, “During the excavations, the mission found on the northern side of the temple a limestone purification basin and a votive plaque for the temple. On the northern side, it found five ostraca with inscriptions in Demotic, in addition to 38 coins dating back to the Roman period and a small part of a limestone column. Some animal bones were also found and studied, and turned out to be the remains of the food of the temple’s priests.”

Mohamed Abdel Badih, head of the Central Administration of Upper Egypt Antiquities, said in a press statement May 7 that the mission also succeeded in uncovering the homes of workers and pieces of papers with the names, salaries and tasks of the workers. “Around 85 tombs were found dating back to different periods from the end of the Old Kingdom of Egypt until the end of the Ptolemaic period,” he said.

He continued, “In the tombs dating back to the Ptolemaic era, 30 mummy cards were found, which were considered as a burial permit, written in the ancient Greek language, Hieratic and Demotic script, with human remains and mummies. These cards usually include the name of the deceased, the name of their father or mother, their homeland, their profession, their age at the time of death, in addition to some supplications for the ancient Egyptian gods."

Abdel Badih explained, “The mission also carried out some documentation work for several quarries on the site, including a quarry for King Ramses III of the 19th Dynasty. The mission cleaned the quarry and the rock painting of Ramses III. Papyrus Harris mentions that Ramses III dispatched 38 skillful quarry workers in the Haridi area to cut stones to build a temple for him, in addition to other Ptolemaic quarries, which proves that the Gabal El Haridi area was a source of quality stones in the Ptolemaic era.”

Observers who spoke to Al-Monitor praised the new discoveries, stressing the importance of exploiting them to revitalize Egypt’s tourism sector.

Bassam al-Shammaa, researcher in Egyptology and a senior tour guide, told Al-Monitor, “Sohag is an important archaeological area, which gives the discovery great value, especially since it combines different stages of Egyptian history.”

He said, “The discovery of the tower house indicates that this site was not only a checkpoint between areas but was also used to secure navigation and the passage of ships in the Nile River, further emphasizing the importance of the river and the need to protect it.”

Shammaa noted, “Finding animal bones opens the door to learn about the diet of the rulers at that time and the types of food available during this era.”

Meanwhile, Abdel Rahim Rihan, antiquities expert and member of the History and Antiquities Committee of the Supreme Council of Culture, told Al-Monitor, “The discovery of the tower house proves that the ancient Egyptians knew how to build with mud bricks since the era of the First Dynasty, starting from Saqqara, Naqada and the tombs of Abydos in Sohag.”

He stressed the historical importance of the recently discovered temple because it was dedicated to the goddess Isis, a major goddess in the ancient Egyptian religion whose worship spread in the Greco-Roman world. “Isis was mentioned for the first time in the Old Kingdom of Egypt [2686-2181 B.C.] as one of the main characters in the Osiris myth. She revived her husband, the slain divine king Osiris, and gave birth to his heir, Horus.”

Speaking about the discovered limestone purification basin, he said, “The interaction between man and the environment was a major feature of Egyptian civilization in all its historical eras, and the use of local building materials as shown here in the use of limestone.”

Rihan explained, “The high priest in ancient Egypt used to perform certain rituals that began with purification with water and then he would gradually move through the temple until he reached the Holy of Holies. Likewise, the common people must purify themselves with water in order to be worthy of entering the house of gods.”

He noted, “The discovery enhances the archaeological and tourist value of Sohag and contributes to reviving tourism there. The Temple of Abydos in Sohag was the main destination for pilgrimage in ancient Egypt since the head of the god Osiris is believed to be buried in Abydos.”

Rihan concluded, “Historical tourism in the world occupies a small percentage compared to recreational or environmental tourism, but Egypt occupies the largest share of it, especially with the recent discoveries that have brought about global attention. In addition, the two events that were recently held for transferring mummies and developing the Road of Rams have greatly revived the fondness for Egyptian civilization. This momentum must be exploited to stimulate tourism.”