A joint German-Egyptian archeological mission has found a large number of pottery fragments inscribe with revealing texts about daily life in the Ptolemaic and Roman periods. 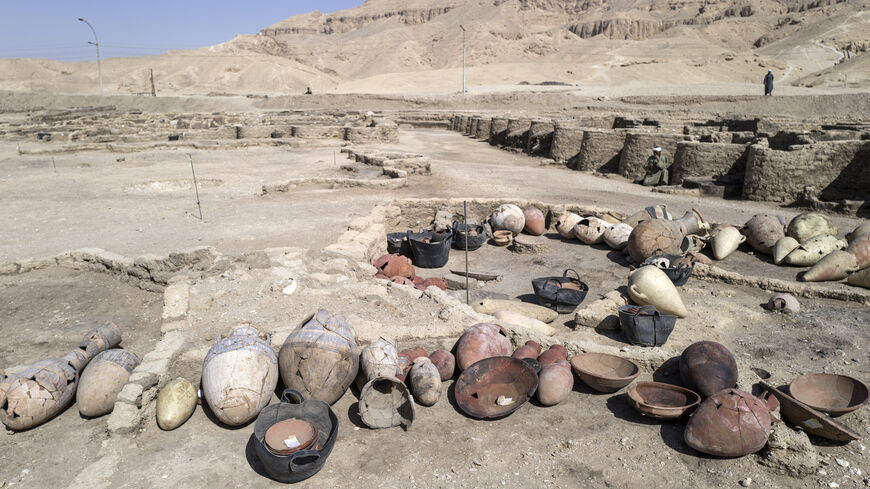 CAIRO — A joint German-Egyptian mission has discovered more than 18,000 pottery shards called ostraca dating to the Ptolemaic period and the beginning of the Roman era. The discovery, announced Feb. 8, was made during excavations in the area of ​​Sheik Hamad near the Temple of Athribis, in the west of Sohag governorate.

According to researchers at the University of Tubingen, Germany, the 2,000-year-old inscriptions on pottery fragments of broken jars offer details of ancient Egyptian life. They include lists of deities, menus and trade information, as well as grammar exercises and arithmetic problems for children, including lines apparently written as punishment by misbehaving students.

More than 80% of the inscriptions discovered were written in the Demotic script (a cursive form of Egyptian hieroglyphics), one of the three ancient scripts found on the Rosetta Stone. Others included hieroglyphs, hieratic, ancient Arabic and Coptic.

Many of the pottery pieces originated from an ancient school, according to University of Tubingen professor Christian Leitz, who led the excavations along with a team from the Egyptian Ministry of Tourism and Antiquities. “There are lists of months, numbers, … and a 'bird alphabet,'” Leitz said in a press release.

Egyptology researcher and tour guide Bassam el-Shammaa told Al-Monitor that the ostraca inscriptions outweigh temple ruins in terms of historical importance. He explained, “A temple would not reveal the daily details of customs, transactions and problems of the ancient Egyptian society. Despite their artistic and architectural importance, temples remain a royal mouthpiece for these periods, whose purpose is mostly to glorify the kings, while the ostraca are notepads.”

Hundreds of pottery pieces shared a single repeated symbol, according to the mission's press release. The archeologists believe it is evidence that "misbehaved students" were forced to write as punishment.

Other findings included a child's drawing of three human figures as well as pictorial representations of deities, geometric figures and creatures such as scorpions and swallows.

The University of Tubingen's press statement read that it is very rare to find such a large trove of ancient pottery. A similar amount was discovered only once before, during excavation at an ancient settlement of craftsmen in Deir el-Medina, near the Valley of the Kings in Luxor.

Shammaa said, “These pottery pieces may not be impressive in terms of shape compared to other archeological finds, but they are rich in information about ancient Egyptian life.” He continued, “This discovery comes in second place in importance in the 21st century, after the Wadi Al-Jarf papyri discovery near the western shore of the Gulf of Suez. The ostraca are more revealing about ancient Egyptian history and people than the papyri.”

Shamma added, “The time has come to rewrite history based on ostraca and not on temples. I believe the texts written on the ostraca are true because whoever wrote them did not, in my opinion, need to lie because he did not write them for the purpose of documenting history.”

The Temple of Athribis is located near the present-day city of Sohag on the west bank of the Nile. The University of Tubingen and the Egyptian Ministry of Tourism and Antiquities began work there in 2003, searching for a temple built by Pharaoh Ptolemy XII. The wider archeological site includes the remains of a tomb, quarries and a settlement.

Hussein Abdel Basir, director of the Antiquities Museum at Bibliotheca Alexandrina, told Al-Monitor via phone that ancient writing on pottery was more “widespread because it was cheaper than papyri and easily accessible.” He added, “The demotic script was the common script for commoners. It appeared in the 25th Dynasty, continued through the end of the Pharaonic eras and extended into the Ptolemaic and Roman eras.”

Abdul Basir explained, “The large number of pieces that were found, particularly the ones with repeated symbols, will contribute to the study of ancient scripts. They will help us translate demotic texts, the scarcity of which has made them difficult to decipher.”