Hundreds of pottery vessels were discovered inside a burial pit south of the pyramids of Giza dating back to the 26th Dynasty. 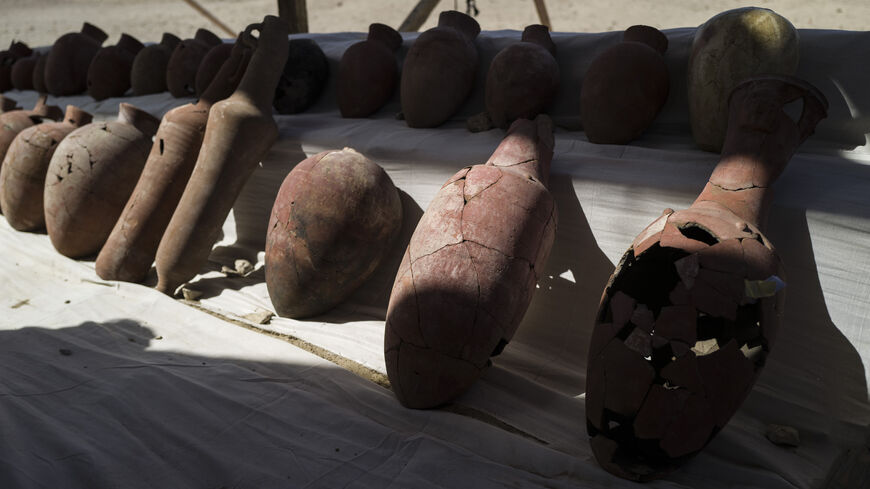 Items from an archaeological find, part of the discovery of a 3,000-year-old lost city, are displayed on April 10, 2021, in Luxor, Egypt. - Mahmoud Khaled/Getty Images

CAIRO — The Czech archeological mission of the Czech Institute of Egyptology announced on Feb. 9 the discovery of a cache of embalming materials during the excavation of burial pits dating to the 26th Dynasty (about 2600 BC), located in the western part of the Abusir necropolis (south of the Giza pyramids and north of Saqqara).

Secretary-General of the Supreme Council of Antiquities Mostafa Waziri said in a press statement, “This cache was found inside a pit measuring 5.3 by 5.3 meters, and more than 14 meters deep, containing unique embalming materials including 370 large pottery vessels.”

Waziri added, “These pots contain remains of materials that were used during the embalming process. In [one] group of pots, four empty limestone canopic jars were found, with a hieroglyphic inscription bearing the name of their owner, Wahibre.”

Imad Mahdi, a member of the Egyptian Archeologists Union, told Al-Monitor, “The discovery indicates the presence of an embalming site in this area. Although archeologists and Egyptologists are fully aware of the materials used by the ancient Egyptians in this process, including resin oils and natron salt, the analysis of utensils may reveal other unrecognized materials.”

He explained, “The canopic pots that were found were used to preserve the innards of the dead that are extracted before the embalming process, and each utensil is used for a specific organ.”

He noted that the materials the pots were made of — pottery, alabaster and gold — vary according to the social class and wealth of the deceased.

Mahdi said that it's unknown why the utensils had been stored in the pit, whose depth suggests it was likely designed for burial purposes.

In a press release, head of the Czech mission Miroslav Barta explained, “The 2021 season was part of a long-term project aimed at uncovering antiquities dating back to an era when ancient Egyptian society was looking for new ways to preserve the unique Egyptian identity. The tombs of Abu Sir, which were built in a similar way to the famous pyramid of Djoser, the most famous king of the Third Dynasty of the Old Kingdom, played a major role in showing the unique Egyptian culture.”

Egyptology researcher and tour guide Bassam el-Shammaa told Al-Monitor that the pots' presence in the pit raises questions. “I think the purpose was storage for a nearby embalming site, one of which is likely to be found in the vicinity.

Shammaa said the discovery will put the 26th Dynasty on the tourism map. “This dynasty was credited with the renaissance of the ancient Egyptian civilization and the revival of nationalism and patriotism after the political and social turmoil witnessed by the 23rd, 24th, and 25th dynasties.”

Deputy director of the Czech mission Mohammed Mujahid said in a press statement that excavations in the area will continue in 2022, and the contents of the new discovery will be studied using modern scientific methods.

However, Shammaa said it's unlikely that the analysis will reveal new information about the materials used in the embalming process, as they have been well documented, but it could reveal more about the process itself.