Archaeologists in Egypt discover coins dating back to the Ptolemaic era, a cemetery and a workshop for the manufacture of pottery vessels in Alexandria. 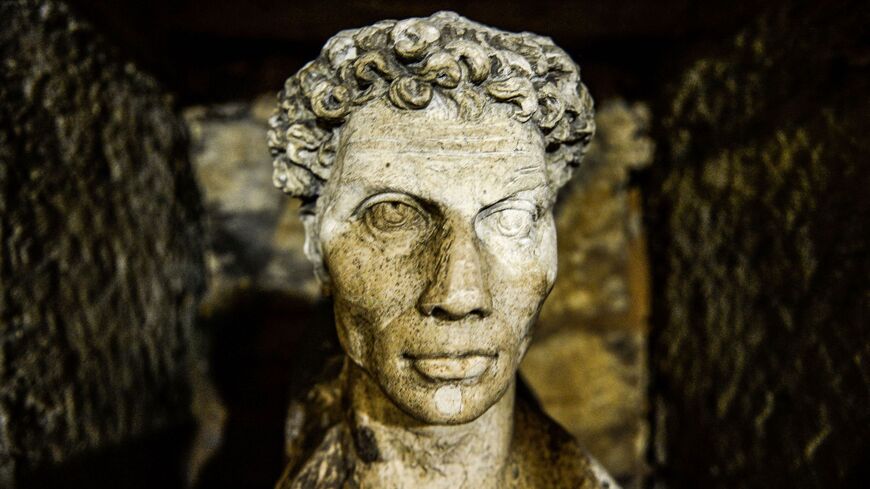 This picture taken on March 3, 2019, shows a view of a statue inside the catacombs of Kom El-Shoqafa (Mound of Shards), dating to the Roman period (1st-4th centuries AD) in the center of the Egyptian Mediterranean coastal city of Alexandria, during the inauguration of a project to drain groundwater from the archaeological site. - MOHAMED EL-SHAHED/AFP via Getty Images

An Egyptian archaeological mission recently made several discoveries in western Alexandria, including a workshop for the manufacture of amphoras, a cemetery, several coins dating back to the Ptolemaic era and about 100 other archaeological finds.

The Egyptian Ministry of Tourism and Antiquities announced in a statement April 11 the discovery of the workshop dating back to the beginnings of the Roman era during excavations carried out by the Egyptian archaeological mission of the Supreme Council of Antiquities at the site of Tabba Matouh in West Alexandria.

Mustafa Waziri, secretary-general of the Supreme Council of Antiquities, said in the ministerial statement that the recently discovered workshop consists of a group of furnaces. He noted that the archaeologists unearthed two of these furnaces. “Interestingly, they (the furnaces) were carved into the rock. One of them is in good condition.”

“For the compacting process, the furnace entrance would be blocked with clay and pottery sherds. The fuel for firing went in through a ramp carved into the rock located below this entrance,” he explained.

According to the statement, “Initial evidence indicates that this workshop was used in later eras, as the northern space was exploited to create a lime-making kiln that may date to the Byzantine era. Part of this furnace was destroyed at a later stage. Two burials were found at the site, believed to date back to the later Middle Ages when the site was used as a cemetery. One of those buried was a pregnant woman.”

Mohaja Ramadan, head of the mission, was quoted in the ministerial statement as saying, “A large group of coins dating back to the Ptolemaic era was discovered. The mission restored a number of them. Some show the face of Alexander the Great. A coin features the face of the god Zeus and another the face of Queen Cleopatra.”

The statement added, “The mission found parts of terracotta statues of deities and women, an amulet attached to the god Bes, the feathered crown of the deity Bes and part of a statue associated with fertility, in addition to parts of fishing hooks used by the residents of the area and the anchor of a boat.”

The statement said nearly 100 burials were also found, in addition to a cemetery with burial holes carved into the rock but which was destroyed, confirming that the site was used in an era before which the pottery workshop was built.

Observers who spoke to Al-Monitor praised the new archaeological discovery in Alexandria that sheds light on the lives of workers during this period.

Bassam el-Shammaa, a researcher in Egyptology and a senior tour guide, told Al-Monitor, "This discovery helps us learn about daily life, the work system, innovation and production efficiency on the ground during the Ptolemaic era and beyond. The existence of several coins among the discoveries is evidence that the site was a place of business and involved financial transactions.”

He argued that “finding coins bearing images of Alexander the Great and Cleopatra is not evidence of the existence of a tomb for one of them near the area where the finds and coins were found.”

Shammaa continued, “The discovery indicates that the workers at this site were receiving good treatment and living a decent life, as housing units were established for them instead of living in the open, in addition to their use of cooking tools and types of food.”

In a press statement on April 12, Ayman Ashmawy, head of the Egyptian Antiquities Sector at the Supreme Council of Antiquities, said, “The mission also succeeded in discovering another building to the south of the discovered two furnaces, which was probably used to store utensils for daily use. Inside it, a large collection of cooking utensils and cutlery were found.”

He added that the mission found a group of units built of limestone dating from the Ptolemaic era, which were used for different purposes. “One … was used as temporary accommodation for workers and consisted of 13 rooms. Others were used to prepare food, since they included stoves and the remains of animal bones such as pigs, goats, sheep and fish bones."

Ashmawy indicated that “some other rooms were used for manufacturing, as they included mills, pestles, amphoras, weighing instruments of different types and spinners. Another room may have been used for cooking and selling food, since it included the remains of amphoras filled with fish bones, cooking stoves and a large number of coins on the floor. Also another room was presumably used for worship, as it housed an altar and parts of poorly preserved terracotta statues, some for the god Harpocrates and others for a king wearing a royal nebula.”

Egyptologist and director of the Antiquities Museum of Bibliotheca Alexandrina Hussein Abdel-Basir praised the findings of the mission. “Alexandria is full of antiquities and cemeteries. We must keep revealing information about this city through discoveries that will benefit tourism in Alexandria. The continuation of excavations in Alexandria will result in more discoveries.”

Abdel Basir told Al-Monitor, “The world is waiting for the discovery of the tombs of Alexander the Great and Cleopatra. If these two tombs are unearthed, Alexandria will be a global destination for tourism.”

So far, finding the tombs of Alexander the Great and Cleopatra remains a dream for researchers and archaeologists around the world.