Egypt announced the discovery of an ancient city in Luxor in southern Egypt dating back 3,000 years. It is believed to be the second-most important archaeological discovery since Tutankhamun’s tomb. 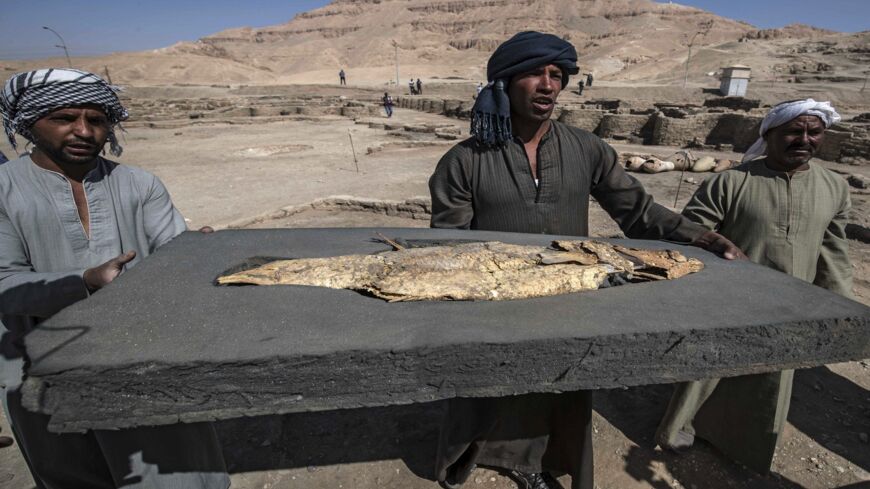 A picture taken on April 10, 2021, shows workers carrying a fish covered in gold uncovered at the archaeological site of a 3000-year-old city, dubbed The Rise of Aten, dating to the reign of Amenhotep III, uncovered by the Egyptian mission near Luxor. - KHALED DESOUKI/AFP via Getty Images

The city, dubbed the “Lost Golden City” or “The Rise of Aten,” was unearthed in the west of Luxor city in south Egypt.

In a Facebook post, Hawass wrote, “Founded by one of the greatest rulers of Egypt, King Amenhotep III, the ninth king of the 18th dynasty who ruled Egypt from 1391 till 1353 B.C, this city was active during the great king’s co-regency with his son, the famous Amenhotep IV/Akhenaten,” adding that the city continued to be used by Amenhotep III’s grandson Tutankhamun and then his successor, King Ay.

He continued, “[The city] was the largest administrative and industrial settlement in the era of the Egyptian empire on the western bank of Luxor. The city’s streets are flanked by houses, and some of their walls are up to 3 meters high.”

He noted that excavations began in September 2020, “and within weeks, formations of mud bricks began to appear in all directions. The site of a large city in good condition of preservation was unearthed, with almost complete walls and rooms filled with tools of daily life. The archaeological layers remained intact for thousands of years.”

Hawass added in his Facebook post that Betsy Bryan, professor of Egyptology at John Hopkins University, said, “The discovery of this lost city is the second most important archaeological discovery since the tomb of Tutankhamun. The discovery of the Lost City not only will give us a rare glimpse into the life of ancient Egyptians at the time where the empire was at its wealthiest, but it will help us shed light on one of history’s greatest mysteries: Why did Akhenaten and Nefertiti decide to move to Amarna (the capital that Akhenaten inaugurated in Minya governorate in the north of Luxor)?”

The post also stated that the excavation area is located between Ramses III’s temple at Medinet Habu and Amenhotep III’s temple at Memnon. Hieroglyphic inscriptions were found on clay caps of wine vessels. The city comprised three royal palaces of King Amenhotep III and the empire’s administrative and industrial center, according to Hawass.

Archaeological finds at the site, such as rings, scarabs, colored pottery vessels and mud bricks bearing seals of King Amenhotep III’s cartouche, confirmed the city’s age, which was the primary purpose of the mission, he said.

Hawass said the team of archaeologists found in the southern part of the city a bakery, a cooking and food preparation area equipped with ovens, and storage pottery. The second area that was unearthed consisted of the administrative and residential district, with larger and well-arranged units. It had one access point leading to internal corridors and residential areas. According to Hawass’ explanation, this was the only entrance to guarantee security by controlling the entry and exit into the enclosed area. The zigzag walls fencing the second area are among the rare architectural elements in ancient Egyptian architecture.

The third area of the city constituted the workshop. On one side, it consists of the production area for mud bricks used to build temples and annexes. The bricks have seals — a square in which his name is carved — bearing the cartouche of King Amenhotep III.

Many casting molds for the production of amulets and delicate decorative elements were also discovered.

The mission also discovered several tools used in industrial activity, such as spinning and weaving works, as well as rubble of metals and glass. But the main area where such activity would be carried out has yet to be unearthed. Two uncommon burials of a cow or bull were also found inside one of the rooms, and the search is still in progress to determine the nature and purpose of these burials.

The mission also found a skeleton buried with its arms spread out next to it and the remains of a rope wrapped around its knees. Hawass described the location and position of this skeleton as “rather odd,” and more research is being carried out on this matter. A vessel was found containing 2 gallons of dried or boiled meat and bearing inscriptions that read “Year 37, dressed meat for the third Heb Sed festival from the slaughterhouse of the stockyard of Kha made by the butcher Iuwy.”

Hawass added in his post, “A large cemetery was uncovered, the extent of which has not yet been determined. So far, the mission has discovered a group of rock-cut tombs of different sizes that can be reached through stairs carved into the rock. … Work is underway, and the mission expects to uncover untouched tombs filled with treasures.”

On the importance of the discovery, Hawass said, “Information has been unveiled that will change history and give us a unique insight into the family of Tutankhamun. The discovery of the lost city will also provide a deeper understanding of the daily life of the ancient Egyptians in terms of the method of building and decorating the houses, the tools they used and how to organize the work. What has been discovered so far is only a third of the area.”

He concluded, “We have a lot of information about tombs and temples, but this is the first time [a discovery] will reveal secrets about the life of the kings of Egypt's golden age.”

Hussein Abdel-Basir, director of the Antiquities Museum at Bibliotheca Alexandrina, told Al-Monitor, “The discovery of the lost city in Luxor is rich and important because the reign of King Amenhotep III made great contributions to the life of ancient Egyptians. This is an exciting period for exploration, especially since Akhenaten, one of the kings of this era, left Luxor and moved to the Amarna region to reside there with his family.”

He said the discovery of residential, industrial and administrative communities with this level of accuracy and organization is an important matter. There are not many discoveries throughout history of urban agglomerations in ancient Egypt, and therefore it is an addition to history and science, Abdel-Basir said, adding that the discovery of a residential community in the western mainland area known to have been used in the past as a place to build tombs for the ancient Egyptians is strange.

As soon as the discovery was announced, rumors circulated that this site was discovered before in the early 20th century by foreign archaeologists. Hawass responded to the rumors, saying to reporters at the ancient city on April 10, “Those circulating these rumors must provide references or the books that have mentioned the [alleged] discovery before to prove their point. If the city was indeed discovered previously, it couldn’t have been hidden from Egyptologists in Egypt and abroad.”

He added, “The [latest] excavation works in the area were the first, and proof is the number of treasures and archaeological finds that were unearthed by the mission. If the city was indeed discovered previously, we would not have found all of these artifacts. The rumors are just an attempt by haters who are seeking to underestimate the importance of this achievement.”