Cairo has announced the discovery of 110 ancient tombs in Dakahlia governorate in north Egypt spanning three civilizations, including the Hyksos era. 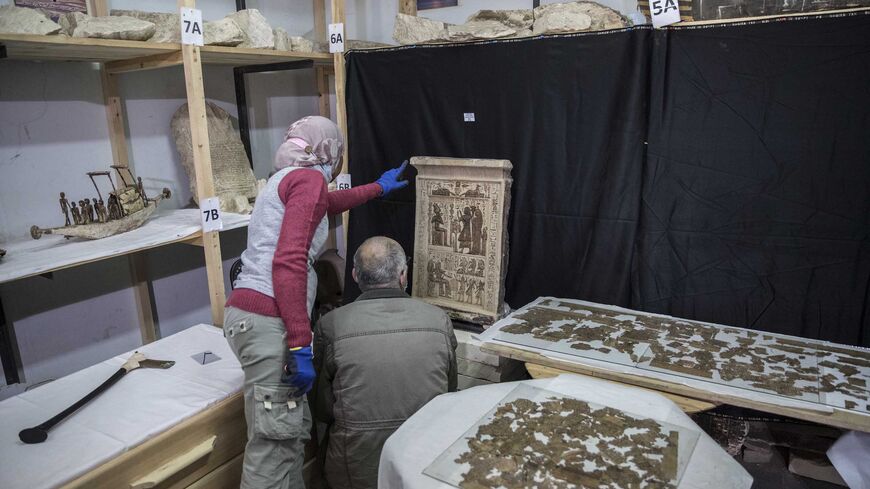 Egyptian archaeologists with a new trove of treasures at Egypt's Saqqara necropolis south of Cairo, on Jan. 17, 2021. - KHALED DESOUKI/AFP via Getty Images

CAIRO — The archaeological mission working in the Kom al-Khalijan area in the northern Egyptian governorate of Dakahlia announced the discovery of 110 tombs dating back to three different civilizations April 27. They include the Lower Egypt civilization known as Bhutto I and II, the Naqada III civilization and a transition era known as the Hyksos period.

Secretary-General of the Supreme Council of Antiquities Mustafa Waziri was cited on the website of the Egyptian Ministry of Tourism and Antiquities calling the discovery an important historical and archaeological event. He explained, “There are 68 tombs dating back to the Lower Egypt civilization, five tombs from the Naqada III era and 37 tombs from the Hyksos era. Excavations are ongoing to reveal more of this region’s secrets.”

Ayman Ashmawi, head of the Egyptian Antiquities Department at the Supreme Council of Antiquities, said in the ministry’s statement of the Lower Egypt find, “These tombs are oval-shaped pits, and people seem to have been buried inside in a fetal position. Most of them were lying on their left side, with their heads facing west. The remains of a baby were found in a jar from the Bhuto II period with a small spherical pottery vessel.”

Ashmawi added, “The five tombs dating back to the Naqada III period are also oval-shaped pits and include two tombs whose sides, bottom and roof were covered with a layer of mud. Inside the pits, the mission found a set of funerary furniture distinctive of this period, including cylindrical and pear-shaped vessels, in addition to stone or clay vessels, all of which were decorated with drawings and geometric shapes and a small mass of flint that was used for kohl bowls.”

The head of the Central Department of Lower Egypt at the Supreme Council of Antiquities, Nadia Khader, was quoted as saying, “The cemeteries of the second transition era, the so-called Hyksos period, numbered 37. The mission found 31 of them that are semi-rectangular pits with depths ranging from 20 cm to 85 cm, and they were all distinguished by their burials in an extended position, with the head pointing west and the face up. A clay coffin was found with a child buried inside it, and two tombs for two children were made of mud bricks in the form of a rectangular structure.”

The mission also found some funerary furniture, including a small-sized pottery vessel and a silver ring, in addition to a set of ovens and stoves, the remains of mud brick foundations, scarab amulets and jewelry such as earrings, some of which are made of semi-precious stones.

The director of the Antiquities Museum at Bibliotheca Alexandrina, Hussein Abdel-Basir, told Al-Monitor over the phone, “This discovery is important on every level. It sheds light on these different stages of civilization. It is unusual to find Hyksos burials in this area, as they buried their dead in the Tal el-Dabaa area [in Sharqia governorate in northern Egypt], which was their capital. The discovery is even more remarkable because it was carried out solely by Egyptians.”

He added, “The discovery is important for the area where the burials were found as it draws attention to the Delta region, which is rich in antiquities. Excavation in the area is difficult due to the nature of its clay soil, which differs from the sandy soil in southern Egypt.” He said that this area needs urgent attention to extract antiquities that are at risk of eventually becoming submerged.

Egypt is busily promoting its antiquities to support the tourism sector, which has suffered successive blows since the 2011 uprising, the Russian plane crash in Sinai at the end of 2015 and the outbreak of the COVID-19 pandemic in 2020. Tourism contributes up to 15% of Egypt's gross domestic product and is a major source of foreign currency.

Abdel-Basir explained, “This discovery has a greater scientific value and has not received a lot of media attention like other discoveries, such as the ancient city that was unearthed in Luxor on April 8.”

Shamaa pointed out that any archaeological discovery is priceless to science and imparts new information about the daily lives of people who lived during these eras like the food they ate, their use of resources, their education and how they organized urban spaces.