An Egyptian Ministry archaeological mission uncovered 250 rock tombs in Sohag governorate, which opens the door for more archaeological discoveries in this region. 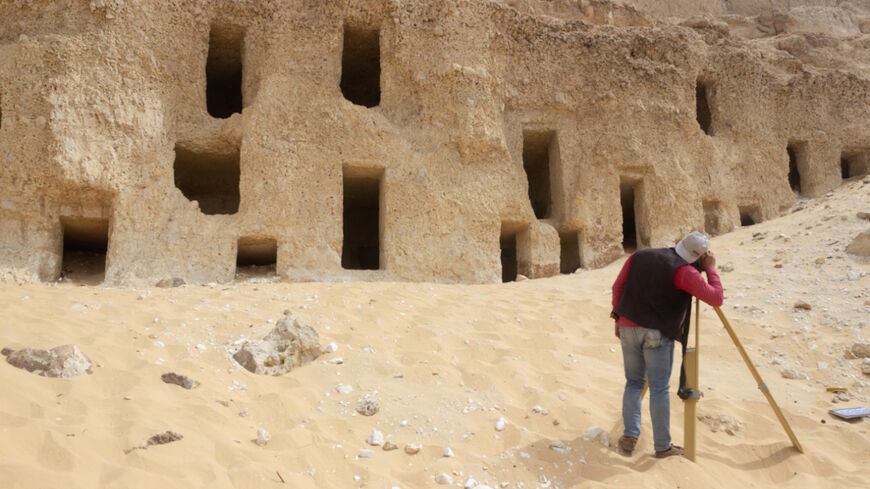 The finds made by an Egyptian archaeological mission affiliated with the Supreme Council of Antiquities come as part of a project for archaeological documentation and restoration work in the region.

The secretary-general of the Supreme Council of Antiquities, Mustafa Waziri, said in a press statement May 11 that 250 graves of multiple styles that were carved at various levels into the mountain were discovered. Some of these graves were found with a well or several burial wells and others had a ramp that ends with a burial chamber, he said.

He added that the finds included a grave dating to the end of the Old Kingdom that has an entrance leading to a gallery and a burial shaft in the southeast side of the site, and a sloping corridor leading to a small burial room.

Waziri said the grave has a fake door with remains of hieroglyphic inscriptions. Wall paintings were also found in the grave portraying the grave owner making sacrifices and people making offerings to the dead.

The director of the Antiquities Museum at Bibliotheca Alexandrina, Hussein Abdel-Basir, told Al-Monitor, “The Sohag region, where the recent archaeological discovery was made, is a very important archaeological area. Many more new discoveries are expected during the coming period with the number of archaeological missions increasing there.”

He added, “Al-Hamidiyah necropolis area is one of the most important and renowned sites in Sohag and has many rock tombs. Sohag was deemed a local center for burial in ancient Egypt. Of note, it was an Egyptian mission that worked on this site, and this reflects the great confidence in the Egyptian missions and their high efficiency.”

Abdul Basir praised the archaeological documentation and restoration project developed by the Egyptian government in Al-Hamidiyah necropolis in Sohag. “We know that there are multiple types of burial in these places and there are graves that have their own monastery, or have several monasteries, and these graves also contain corridors that end with burial chambers.”

Mohamed Abdul Badia, head of the Central Department of Antiquities of Upper Egypt, said in a May 11 statement that the excavation works at the Al-Hamidiyah necropolis also unearthed many pottery and votive objects (objects offered to the dead or gods).

He added that some of the discovered pots were used in daily life and others for funerary purposes. This is in addition to small vessels, fragments of a round metal mirror, human and animal bones and funeral limestone plates dating back to the end of the Sixth Dynasty, he said.

“The recent discovery opens the door to other discoveries,” Abdul Badia said. “Egypt has many antiquities sites, but light must be shed on other unknown areas. Archaeological missions should not be limited to the famous archaeological areas such as Saqqara or Luxor.”

Historian and Egyptologist Bassam al-Shamaa also praised the project of archaeological documentation and restoration of the rock tombs in Sohag. “We have called for this project over the years,” he told Al-Monitor.

Shamaa noted three major benefits of the recent archaeological discovery. “Given their small size compared with the tombs reserved for royalty, which are of large sizes, these tombs may have been allocated to the common people. This provides more details about the daily life of ordinary people at the time.”

He added, “These tombs were used for periods of time ranging from the end of the Old Kingdom to the end of the Ptolemaic era. This will allow us to understand the religious burial rituals and the embalming process, especially in light of the discovered offerings and animal and human bones. The recent finds illustrate the religious burial ritual, the stages of life and death and their relationship with the pharaohs of that time.”

Shamaa said the discovery could lead to a discovery of the secrets of the first social revolution in Pharaonic Egypt.

In its statement on the recent discovery, the Egyptian Ministry of Tourism and Antiquities said that after the completion of the project of archaeological documentation and restoration of rock tombs, more graves are expected to be unearthed at more than one level in the eastern mountain in Sohag governorate.