The latest archeological discovery at Cairo’s Saqqara necropolis includes coffins dating back some 3,000 years, a funerary temple and other treasures. 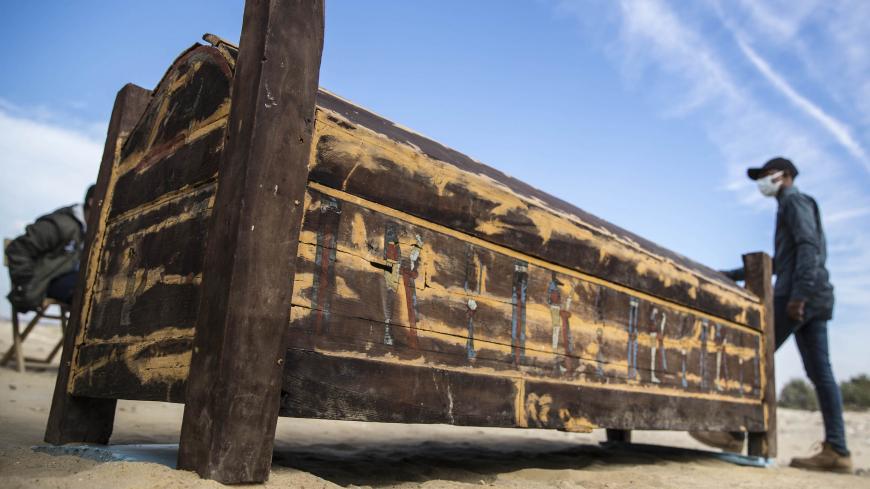 An adorned wooden sarcophagus is displayed during the announcement of the discovery by an Egyptian archaeological mission of a new trove of treasures at Egypt's Saqqara necropolis south of Cairo, on Jan. 17, 2021. - KHALED DESOUKI/AFP via Getty Images

CAIRO — Egypt recently uncovered a significant archaeological discovery that sheds light on secrets in the Saqqara necropolis south of Cairo and on the 18th and 19th Egyptian dynasties.

The unearthed artifacts are a major find that could turn the ancient burial site into a major tourist and cultural destination and revise our understanding of region during the New Kingdom era under King Teti, the first pharaoh of Egypt’s Sixth Dynasty. The burial sites being excavated are around his pyramid.

Prominent archeologist Zahi Hawass told reporters at the Saqqara site on Jan. 17 that the joint Egyptian mission of researchers from the Supreme Council of Antiquities and the Zahi Hawass Institute of Egyptology, unearthed the funerary temple of Queen Nearti, the wife of King Teti, near the pyramid of her husband.

The mission also found plans for the temple's construction and three warehouse-like structures built of mud bricks in the southeast side of the funerary temple, used for storing ritual offerings to the deities.

In addition, 52 burial wells were found, with depths ranging from 10 to 12 meters and containing more than 50 wooden coffins dating back some 3,000 years during the New Kingdom period — a discovery unprecedented in the Saqqara area.

The sarcophagi are carved into human form and bear paintings of several gods as well as funerary writings from the Book of the Dead, which is said to be a guide for the deceased in their journey to the other world.

Several other artifacts were also found inside the wells, including statues of deities such as the gods Osiris, Ptah and Seker.

The archeological mission also unearthed a papyrus four meters long and one meter wide, bearing excerpts from the Book of the Dead and the signature of its owner, Bu-Khaa-Af.

This same name was found on four Ushabti funerary statues. A wooden coffin carved in human form was also found, in addition to other Ushabti statues made of wood and tin-glazed pottery from the New Kingdom era.

A set of wooden masks and a shrine to Anubis, a god of the afterlife, were also uncovered, as well as statues of Anubis found in good condition. Several games left for the dead were also unearthed such as senet, which is very similar to today’s chess, and as set for the Game of Twenty Squares bearing the name of its owner.

Other artifacts included depictions of geese as well as a bronze ax, indicating that its owner was one of the leaders of the army during the New Kingdom era, and paintings depicting scenes of the deceased and their wives and bearing hieroglyphics.

One limestone panel in good condition depicts a man identified as Khu-Ptah and his wife Mut-am-waya. One part of the painting shows the couple worshiping the god Osiris, while the lower part depicts the man seated and his wife sitting behind him with their daughters, one at her mother’s feet holding a lotus flower to her nose.

Hawass said that the excavation works continue and new archeological discoveries can be expected as many of Saqqara's antiquities have not been unveiled.

Sabri Farag, director of the Saqqara archaeological site, told Al-Monitor that the latest discovery is a very important one in the Saqqara necropolis and that the excavation mission is ongoing. He said, “Saqqara has not revealed all its many secrets yet,” adding that the mission uncovered eight archeological finds in 2020 and this new one already in 2021. He said that more discoveries can be expected over the course of the year.

Waad Abu al-Al, director of projects at the Egyptian Ministry of Tourism and Antiquities, told Al-Monitor that restoration works are underway in the southern cemetery of King Djoser to open the necropolis for tourists.

“Excavations works in the ancient site are also ongoing and once they're completed, Saqqara will take its place on the world’s tourist map,” he said.