The discovery of unique tomb in Egypt’s Giza

The archaeological discovery provides new insight into the turbulent period of the beginning of the era of Persian domination of ancient Egypt and puts forward the first evidence of true globalization in the ancient world. 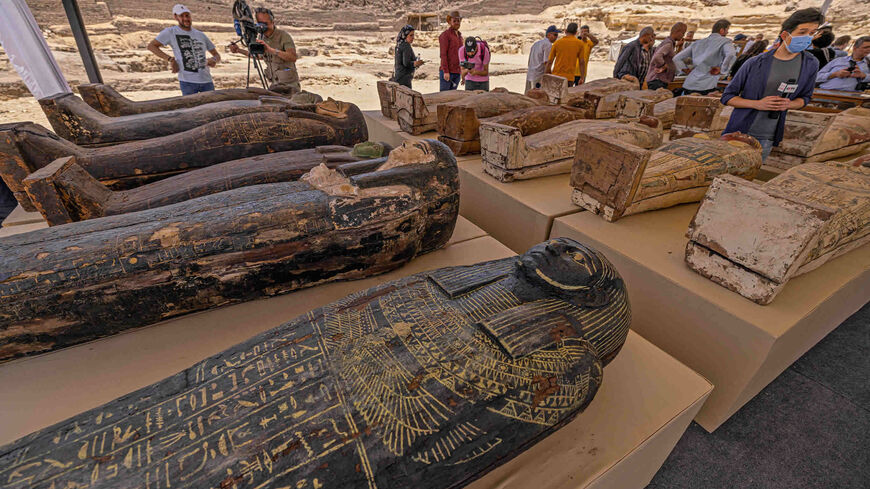 Sarcophaguses found in a cache dating to the Egyptian Late Period (around the fifth century B.C.) are displayed after their discovery by a mission headed by the Supreme Council of Antiquities, at the Bubastian cemetery at the Saqqara necropolis, southwest of Cairo, Egypt, May 30, 2022. - Khaled Desouki/AFP via Getty Images

CAIRO — The Egyptian Ministry of Antiquities announced July 15 that an archaeological mission of Czech Institute of Egyptology, Faculty of Arts, Charles University in Prague found the sarcophagus of Wahipra Merinit, who was the “commander of foreign soldiers” during the late 26th dynasty and the beginning of the 27th dynasty, in the archaeological area of ​​Abu Sir, Giza.

In a press release, the ministry said that the discovery is “unique of its kind” and provides the first evidence of a real globalization era in the ancient world.

Mohamed Youssef, director of Saqqara Antiquities, explained that the cemetery documents a period in which the ancient Egyptians lived in the sixth century B.C., and was a model for the concept of political and economic globalization.

“The influence of the ancient Egyptians extended outside the country throughout the Mediterranean, which was why the kings of the 26th dynasty [664-525 B.C.] brought in foreign mercenaries and integrated them in many parts of the country, including the army, until the fall of Egypt under Persian occupation,” he told Al-Monitor.

The discovery is all the more significant because it reflects the architectural development on the construction of the well-pit tomb cemetery, according to Youssef.

In the ministry statement, Secretary-General of the Egyptian Supreme Council of Antiquities Mostafa Waziri said that the design of this well tomb was unparalleled in ancient Egypt.

He explained, “The tomb is designed based on a well. It consists of the main well that is 6 meters [20 feet] deep, with dimensions of approximately 14 meters by 14 meters [46 feet], divided into several parts separated by bridges carved in the natural rock of the area.”

Waziri continued, “In the middle of the main well another smaller and deeper well was dug. It was used as the main burial well for the tomb owner."

According to the press release, Marslav Barta, head of the Czech mission, said that at the bottom of the main burial well, at a depth of about 16 meters (52 feet), a double coffin was found, slightly damaged and completely covered with sand.

He noted that the outer sarcophagus of Wahipra Merinit was made of two huge blocks of white limestone, and inside its cavity lies another basalt human-shaped tomb, with writings from Chapter 72 of the Book of Dead inscribed on its upper part, describing the revival of the deceased and his journey to the other world.

Barta explained that the mission found on the eastern side of the necropolis many intact archaeological relics that were part of the funerary belongings, including 402 Ushabti statues made of faience.

Ushabtis are small figures deposited in an ancient Egyptian tomb with the mummy generally bearing inscriptions from the Book of Dead, and were believed to represent the deceased and perform services on their behalf in the afterlife.

Two vases made of alabaster were also found, in addition to a model of faience for an offering table, 10 cups bearing symbols and an ostracon made of limestone engraved with hieratic religious texts written in black ink.

Barta noted, “Due to the small size of the ostracon, the author of the text decided to cover it with brief excerpts from the spells of the Book of the Dead, which also formed parts of the passing ritual, thus ensuring the existence of another life for the tomb owner in the other world.”

He added, “Initial studies conducted on the well cemetery revealed that it was looted toward the end of the old eras, probably around the fourth and fifth centuries."

The archaeological area of ​​Abu Sir is located in the south of Giza governorate, 4.5 kilometers (15 feet) north of the archaeological area of ​​Saqqara. Its name is derived from “Bar Osiris,” meaning the seat of the god Osiris, and includes a series of tombs of the kings of the fifth dynasty, in addition to the temples of the sun, including the Sun Temple of King UserKaf.

The statement quoted Muhammad Mujahid, deputy director of the Czech mission, as saying, “Although the archaeological excavations of Wahipra Merinit  tomb did not provide us with many important archaeological findings or elaborate funerary items, this cemetery is considered unique and important.”

He said that both the architectural design of the tomb and its contents provide valuable information about the significance and meaning of funerary baggage items and the tomb inscriptions accompanying the deceased in the other world.

"[The tomb also] offers a new insight into the turbulent period of the beginning of the era of the Persian domination of ancient Egypt,” Mujahid added.

Youssef explained that the discovered tomb is relatively poor and incomplete, which indicates a period of turmoil and lack of economic capabilities that Egypt went through before it fell into the hands of the Persians for about 100 years.

He added that the Egyptians, kings of the 28th dynasty, were able to expel the Persians and regained power until Alexander the Great invaded Egypt in 332 B.C.

Commenting on the next steps, Youssef said that small artifacts, such as Ushabti statues, were transferred to the ministry’s stores for restoration and display in archaeological museums, while the cemetery remains a site for researchers to make comparisons about the architectural development of archaeological tomb design.

Hussein Abdel Basir, director of the Antiquities Museum at the Bibliotheca Alexandrina, told Al-Monitor that the archaeological discovery provides more information on the history of the Egyptian military and its foreign relations.

He said that the discovery reveals the period when the Egyptian army began to rely on mercenary soldiers among its ranks from the Greeks and the Mediterranean islands.

“The discovery shows that these foreign soldiers were led by the Egyptian military commander Wahipra Merinit — the owner of the tomb — to consolidate Egypt’s influence on the Mediterranean and the ancient Near East,” Abdel Basir concluded.