The Egyptian archaeological mission operating in south Saqqara near Cairo has discovered five tombs with inscriptions dating back 4,000 years and containing burial and archaeological finds. 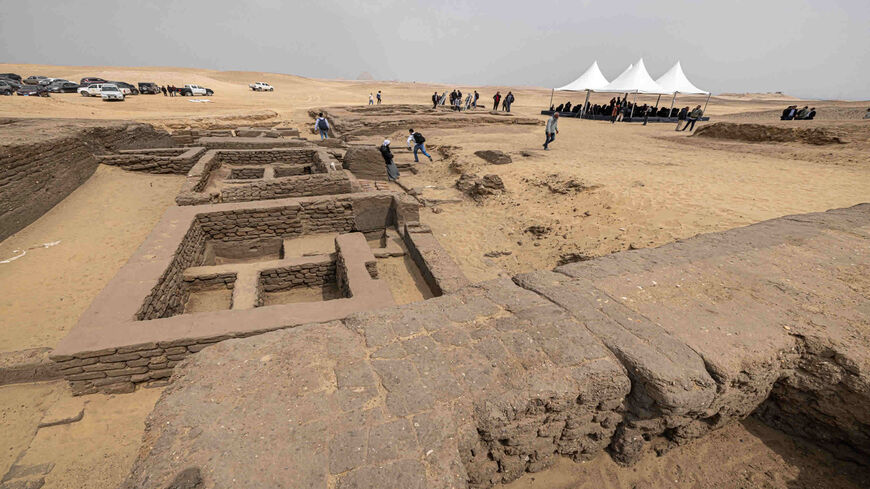 Members of the media gather in the area where five ancient Pharaonic tombs were recently discovered at the Saqqara archaeological site, south of Cairo, Egypt, March 19, 2022. - Khaled Desouki/AFP via Getty Images

CAIRO — The Egyptian archaeological mission working in the area northwest of the pyramid of King Merenre I in the Saqqara area, just outside Cairo, has recently discovered five tombs decorated with well-preserved paintings, dating back to the era of the Old Kingdom and the First Intermediate Period, along with other burial and archaeological finds inside the cemetery.

The Egyptian government said in a press statement that the mission’s excavation works also uncovered other burial and archaeological finds inside the cemetery.

On March 17, the Ministry of Antiquities and Tourism posted on its Facebook page a video clip of Egyptian Minister Khaled al-Anani, accompanied by Mustafa Waziri, secretary-general of the Supreme Council of Antiquities and head of the Egyptian mission operating in south Saqqara, inside the recently discovered cemetery to inspect its inscriptions and archaeological finds.

Anani thanked the team and praised the efforts of the new generation of archaeologists to unearth unprecedented discoveries on a regular basis by the Egyptian team.

In a post on his Facebook page, Waziri explained that the first of the discovered tombs belonged to a person named Eri who was a senior statesman. It consisted of a well leading to a burial chamber whose walls are carved with pictures of several funeral scenes, including views of the offering tables, the facade of the palace and seven sacred oil pots. There is also a huge sarcophagus made of limestone, in addition to carved pieces belonging to the owner of the tomb, and the mission is now working on assembling them, he noted.

He continued, “The second tomb is believed to belong to the wife of a person named Yaret because of its proximity to his tomb. It consists of a rectangular well.”

As for the third tomb, Waziri said that this is of Pepi Nefhany who held several positions, including supervisor of the great house, priest and purifier of the house.

The fourth tomb consists of a rectangular well located about 6 meters (roughly 20 feet) below the surface of the ground for a woman named Petty, who was a priestess of the goddess Hathor, according to Waziri.

He said that the fifth tomb “is for a person called Henu, and it consists of a rectangular well located at a depth of about 7 meters [23 feet]. He had titles including the overseer and the supervisor of the royal house, mayor and hereditary prince and supervisor of the orchard.”

On March 19, the five Pharaonic tombs were revealed to the Egyptian media in the presence of a group of Egyptian bloggers and influencers.

Archaeologists who spoke to Al-Monitor praised the new archaeological discovery, noting that the tombs open the door to revealing more information about the Old Kingdom and the First Intermediate Period.

Hussein Abdel Baseer, archaeological expert and director of the Antiquities Museum at Bibliotheca Alexandrina, told Al-Monitor, “The new discoveries are precious and valuable because of the information they will reveal about these eras, especially in light of the lack of much information about them.”

Egyptian historian and archaeological researcher Bassam al-Shammaa told Al-Monitor, “The discovered tombs have some unique characteristics, and they open the door to research around them, especially as they date back to an era when Egypt was going through its worst periods of tension and social revolution that came after the long reign of King Pepi II, who ruled for nearly 94 years, from the age of six until the age of 100.”

He said, “The cemetery is important as it also includes wooden statues that were carved with high accuracy, despite the lack of use of wood in ancient Egypt, because it is not a country of forests. Wooden statues are a sign of the financial condition of the owners of the tombs, and of the high skill of artists, given the delicate wood carvings, despite its rarity in ancient Egypt.”

He called on the Egyptian Ministry of Tourism and Antiquities to “work to reattract tourists from African countries, including from South Africa, to visit Egypt, in addition to seeking to attract more Arab tourists to learn about Pharaonic history, such as Emirati tourists, given the United Arab Emirates’ and its people's recent interest in antiquities and the opening of the Louvre Abu Dhabi.”

It is noteworthy that the Egyptian archaeological mission had announced during the past years a number of important archaeological discoveries in the Saqqara antiquities area, including the major discovery in November 2020 of more than 100 coffins containing well-preserved mummies of senior statesmen and priests from the 26th Dynasty.

The mission also discovered two tombs dating back to the era of the Fifth Dynasty, which belong to a priest named Wahtye and the supervisor of the royal palace Khoei. Other discoveries include a cemetery for cats.