Speaking to Al-Monitor, Secretary-General of the Supreme Council of Antiquities in Egypt Mustafa Waziri praised the efforts of the Egyptian missions unveiling major archaeological discoveries in the Saqqara area. 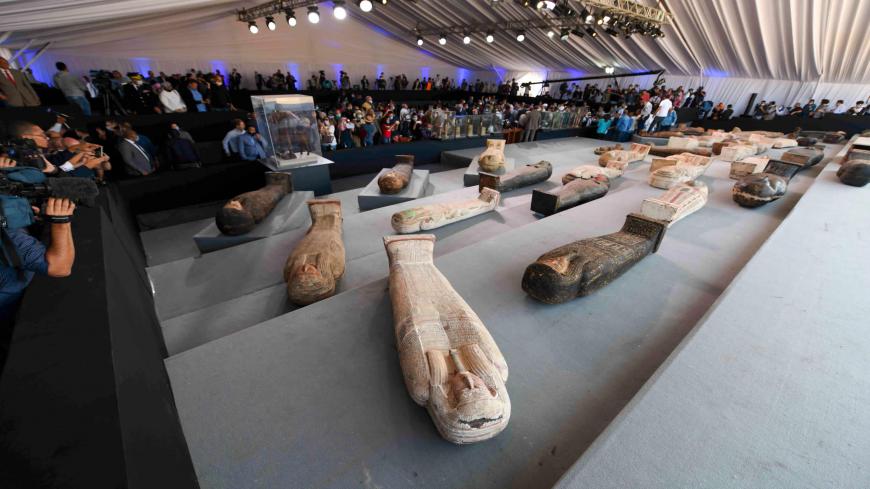 Wooden sarcophagi are on display during the unveiling of an ancient treasure trove of more than a 100 intact sarcophagi, at the Saqqara necropolis, south of Cairo, Egypt, Nov. 14, 2020. - Ahmed Hasan/AFP via Getty Images

Secretary-General of the Supreme Council of Antiquities in Egypt Mustafa Waziri announced Nov. 14 the largest archaeological discovery this year in the Saqqara antiquities area.

At a press conference, Waziri said the new discovery includes 100 ancient wooden coffins closed for more than 2,500 years, 40 gilded statues of the God of the Saqqara necropolis Ptah Sukkar, two wooden statues and a number of Ushabti statues and amulets, and four gold cartonnages.

On his Instagram account, Waziri shared a number of photos of the coffins unveiled during the latest archaeological discovery in the Saqqara antiquities area.

At the conference, Waziri mentioned a workshop for the manufacture of coffins in Saqqara that has yet to be unearthed, asserting that the Egyptian mission will reveal this workshop in 2021.

“Despite the spread of the coronavirus in various countries around the world, we will not stop working for one second. We continued working while implementing all precautionary measures to prevent the spread of the virus,” Waziri told the journalists. He explained that the mission operating in the region is purely Egyptian, made up of Egyptian archaeologists and restorers. He also noted that all craftsmen and workers on the site are Egyptian and praised their expertise and respectful efforts.

In September this year, the Ministry of Tourism and Antiquities had unveiled 13 archaeological coffins dating back more than 2,500 years in a deep burial well in the ancient Saqqara area. In the past years, the ministry announced a number of important archaeological discoveries in the same area, most notably the discovery of 59 coffins with well-preserved mummies of senior statesmen and priests from the 26th Dynasty. This discovery was announced at an international press conference in early October.

Speaking to Al-Monitor, Waziri said the conditions of the recently discovered coffins are better than the ones discovered in October, pointing out that the coffins, whose inscriptions and colors are extremely well preserved, belong to persons with high-ranked jobs. “More than 40 foreign missions have worked on this site, but the Egyptian mission has managed to dazzle the world since 2018 [by unveiling major archaeological finds]," he said.

He noted that the new discovery was unveiled in the presence of the directors of the three largest museums in the country, namely the Egyptian Museum in Tahrir Square, the Grand Egyptian Museum and the Egyptian Civilization Museum, which are competing to obtain the largest possible number of artifacts.

Giving credit to Minister of Tourism and Antiquities Khaled al-Anani for proposing the idea of opening one of the coffins with a mummy inside and conducting an X-ray examination of the mummy, Waziri said this move was carried out by a distinguished group of Egyptians archaelogists.

Waziri also said that a procession of royal mummies will be carried out from the Egyptian Museum in Tahrir Square to the Museum of Egyptian Civilization in the coming period, in addition to the opening of the Administrative Capital Museum and the Airport Museum. He stressed that the coronavirus pandemidc will not hinder the ministry’s future discoveries.

Waziri also pointed to the increase in the number of Egyptian archaeological missions, which for the first time in the history of Egypt reached about 50 missions operating in various archaeological sites across the country. He praised the efforts exerted by these missions formed by teams of "brilliant" workers, technicians and archaeologists in uncovering the ancient Egyptian civilization.

The Egyptian missions had halted their work due to  coronavirus crisis, but in August they resumed their excavation works in four regions, namely Tuna al-Jabal in Minya, the Saqqara antiquities areas, the pyramids in Giza and the al-Asasif area west of Luxor, while taking preventive measures.

Waziri said that all excavations had stopped since the coronavirus outbreak in the country in April.