A joint Egyptian-Spanish archaeological mission announced a major discovery in the Bahnasah region, in Minya governorate, consisting of a unique cemetery. 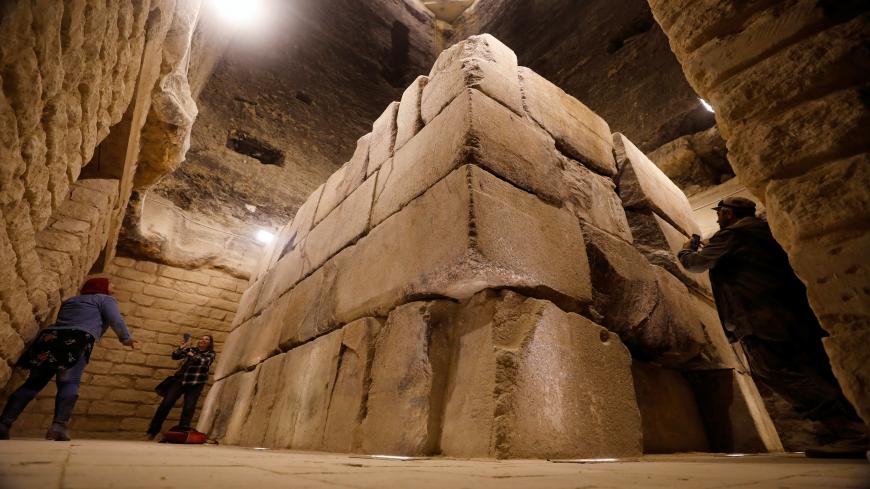 CAIRO — Mostafa Waziri, secretary-general of the Supreme Council of Antiquities in Egypt, announced May 17 that the Egyptian-Spanish archaeological mission affiliated with the University of Barcelona discovered a unique cemetery dating back to the el-Sawi era, known as the 26th Dynasty. The discovery was made in Bahnasah region, located in Minya governorate, one of the most famous archaeological regions in Egypt.

Esther Ponce, head of the joint mission, said in a statement on the Ministry of Tourism and Antiquities website that the excavations also uncovered eight tombs dating back to the Roman era with a domed and nonengraved roof. Inside of these tombs, several Roman tombstones, bronze coins, small crosses and clay seals were found.

Soha Bahgat, spokesman for the Egyptian Ministry of Tourism and Antiquities, told Al-Monitor that the city of Bahnasa, located on the western bank of the Nile, near the city of Beni Mazar north of Minya, was known in Hellenistic times as the city of Oxyrhynchus (meaning sharp-nosed fish). “In the Islamic era, the city of Bahnasa was named after Bahaa el-Nesaa, the daughter of the city's governor during the Islamic conquest,” she said.

Bahgat explained that Bahnasa was a great city during the Roman era and was home to more than 30,000 monks and a large number of monasteries. “The city has a complete archive that was uncovered in the late 19th century consisting of more than 50,000 papyri,” she added.

Bahgat noted that the archaeological excavations began in 2008. The Egyptian-Spanish mission succeeded in uncovering the ruins of a mudbrick church dating back to the fifth century. The church contains a main prayer hall and some rooms with walls covered with colorful decorations, writings and songs in Coptic Egyptian in the name of St. Phippamon.

The mission completed the excavation works in 2013 after a two-year hiatus in 2011 and 2012 due to the security situation in Egypt in the wake of the January 25 Revolution. At that time, the mission discovered remains of soft brick walls of a prayer room, a monk’s room, a dining room, a kitchen and a crops storage area. All the walls were decorated with crosses.

The announcement came at the launch of the winter excavation season. Although expectations were high that the archaeological season would be exceptional, the coronavirus outbreak ended the work of all foreign missions.

Bahgat said that most of the excavation teams were forced to halt their work; only five out of 280 foreign and domestic missions are still active with a reduced number of workers and working hours.

Regarding the protection measures against the coronavirus, the Ministry of Tourism and Antiquities confirmed that measures have been taken to protect the excavation workers, as their number on the excavation sites was halved from 50 to 25 workers, working in two shifts.

On April 3, the Ministry of Tourism and Antiquities launched virtual tours of archaeological sites and museums, through a campaign dubbed “Discover Egypt from your home.” The campaign aimed to encourage citizens to stay at home amid the spread of the coronavirus.

In late April, the Egyptian-Spanish archaeological mission announced another archaeological discovery, unearthing an ancient wooden sarcophagus in Draʻ Abu el-Naga, in Luxor governorate. The sarcophagus belongs to the 17th Dynasty and dates back to 1600 B.C.

The sarcophagus was found near a mudbrick compartment with next to it funerary furniture pieces. It measures 1.75 meters (5.7 feet) by 0.33 meters (1 foot). It was made of wood from a single piece of sycamore tree, and was coated with a layer of white grout. It was decorated from the inside in red.

In 2018, the Ministry of Tourism and Antiquities approved a plan of about 1.27 billion Egyptian pounds ($80 million) to support archaeological discoveries and the development of tourist areas in 2019. The ministry's plan included a project to develop the Giza Pyramids area, as well as projects to restore the Baron Empain Palace in Heliopolis and Prince Mohamed Ali Palace in Manial, and reopen the Road of Rams linking Luxor and the Karnak temples. In addition, it approved the restoration of the Abu Mena monestary in Alexandria, which is threatened to be taken off the World Heritage in Danger List that it has been part of since 2001.