Egypt’s Ministry of Tourism and Antiquities announced the discovery of two cemeteries dating back to the Late Period of ancient Egypt in al-Bahnasa archaeological area in Minya governorate. 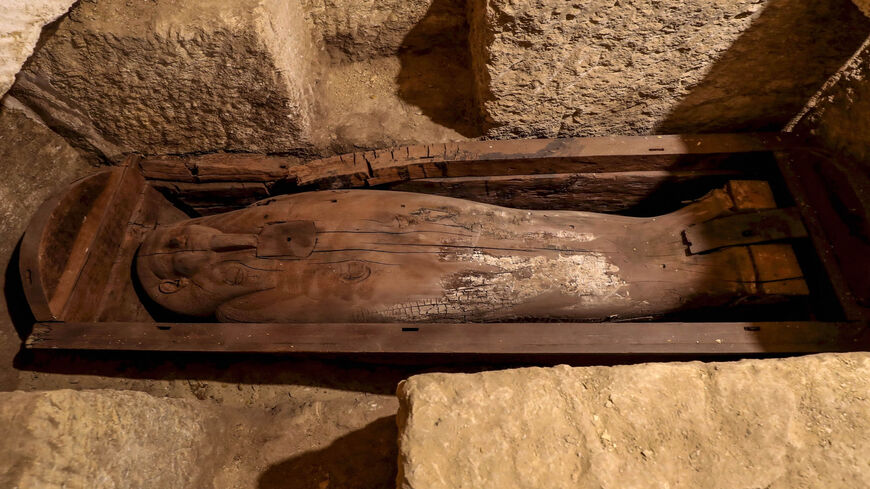 CAIRO — The Egyptian Ministry of Tourism and Antiquities unveiled Dec. 5 two adjacent cemeteries dating back to the “Sawy era,” or the Late Period of ancient Egypt, at an archaeological site in Minya governorate, in Upper Egypt.

In a Dec. 5 statement, Mustafa Waziri, secretary-general of the state-run Supreme Council of Antiquities said the Spanish archaeological mission affiliated with the University of Barcelona, working at al-Bahnasa site, “found in one of the two tombs the remains of two unknown persons with gold tongues.”

He continued, “Inside the tomb, a sarcophagus made of limestone was found with a lid in the form of a woman, and next to the remains of an unknown person."

Waziri said that the “preliminary studies of the tomb showed that it had been previously visited in ancient times.”

According to the ministry’s statement, however, head of the Spanish mission Maite Mascourt said that the second cemetery was completely closed, and the mission opened it for the first time during the excavations.

The director-general of Central Egypt Antiquities, Gamal al-Samastawy, told Al-Monitor, “The Spanish mission found in the second cemetery a limestone sarcophagus with a human face that was in good condition, in addition to 402 small statues.”

He said that the mission has been working at al-Bahnasa archaeological area for nearly 30 years, during which it found many tombs dating back to the Sawy, Greco-Roman and Coptic eras.

Commenting on the gold tongues found in the tombs, Samastawy said, “The tongues were one of the oldest religious beliefs of the Late Period of ancient Egypt — the Roman and Ptolemaic periods. The tongue was made of gold so the deceased could defend himself before the trial in the other world, according to the prevailing belief at that time.”

He added, “The discovery of the gold tongue in this tomb is not the first of its kind. Gold tongues were previously discovered in a rocky tomb in Alexandria.”

In late January, the Ministry of Tourism and Antiquities unveiled an archaeological discovery in the coastal city of Alexandria overlooking the Red Sea, where 16 mummies were found in tombs carved in rocks. One of the mummies had a gold tongue.

“The Spanish mission is still working in cooperation with several Egyptian restorers to study remains of a corpse and determine the identity of the owner of the second tomb,” Samastawy said.

Hussein Abdel Basir, director of the Antiquities Museum at the Bibliotheca Alexandrina, told Al-Monitor via phone, “The Sawy era is called the Renaissance era, and is an important period of time, during which [Egyptians] revived the glories of ancient arts and added their own touch. It is also the period of prosperity after the end of the modern state. Archaeologists describe the [Late Period of ancient Egypt] as Egypt’s last smile before the Greek Ptolemaic occupation at the hands of Alexander the Great.”

Abdel Basir said, “During the Sawy era, Egypt experienced a renaissance at all cultural, economic and religious levels.”

Commenting on the recent discovery, he said, “It is very significant to find antiquities dating back to the Sawy era in the Minya area in Upper Egypt. This confirms the importance of al-Bahnasa area, which saw several archaeological discoveries in the past.”

The Ministry of Tourism and Antiquities had previously announced in a statement in May 2020 that a joint archaeological mission from Egypt and Spain had discovered a cemetery dating back to the Sawy era in al-Bahnasa area in Minya governorate, consisting of one room built of polished limestone, described as “one of its kind and undiscovered previously in al-Bahnasa.”

Abdel Basir noted, “What’s of paramount significance is the ministry’s announcement this week about the discovery of a gold tongue inside the mummy, which was believed to allow the deceased to speak in the presence of Osiris, the god of resurrection and the afterlife. The discovery is also further evidence of the importance of religious and funerary rituals during that era.”

“The new discovery adds to Egypt’s archaeological wealth and is seen as a new global promotion for Egypt’s relics, helping boost tourism movement to the country, and aiding in the recovery of this vital sector that was heavily affected by the coronavirus pandemic,” he added.

“Minya governorate in Upper Egypt is one of the most famous archaeological areas in Egypt and is home to a huge number of antiquities from different periods of time, including Roman, Greek and ancient Egypt. The recent discoveries may be the beginning of a greater archaeological breakthrough in this rich area,” he concluded.