Egypt announced the discovery of 13 completely sealed coffins dating back more than 2,500 years, as the country resumes excavation missions following months of hiatus due to the coronavirus pandemic. 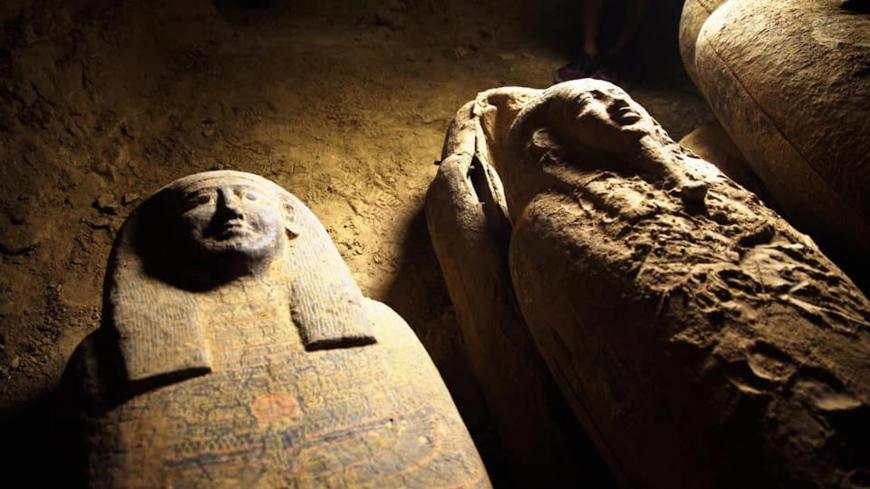 The Egyptian Ministry of Tourism and Antiquities announced Sept. 7 the discovery of 13 completely sealed coffins dating back more than 2,500 years in a deep burial shaft in the ancient Saqqara region of the Giza governorate, south of Cairo.

According to Minister of Tourism and Antiquities Khaled al-Anani, the burial shaft is about 11 meters (36 feet) deep. The shaft contained wooden coffins with paint still intact and stacked on top of each other. Anani posted video footage from the archaeological discovery site on his Instagram account, with a caption that read, “An indescribable feeling when you witness a new archeological discovery. Stay tuned for the announcement of a new discovery in Saqqara. Thank you to my colleagues in the ministry.”

According to the ministry's statement published on its Facebook page, a preliminary study showed that the coffins are completely sealed and have not been opened since they were buried. It is likely that more coffins will be discovered in the niches near the shaft, it added. One of these niches was opened and wooden coffins and archaeological pieces were also found.

Al-Monitor spoke to Mostafa Waziry, secretary-general of the Supreme Council of Antiquities who is currently leading the Egyptian archaeological mission in Saqqara. He said, “Saqqara is a promising region. It is one of the most important archaeological regions that still has unrevealed secrets. More work and more archaeological excavations are required to uncover more of its secrets and treasures. Work is underway to define the identity and titles of the occupiers of these 13 coffins, which were found after 2,500 years.”

He explained that a team of Egyptian restoration workers began restoring the 13 archaeological coffins, adding that archaeological excavations are continuing in the region, and that indications are promising and usher in more new discoveries.

Waziri noted that this new discovery is not the first in the archaeological region of ​​Saqqara, as archaeological discoveries have remarkably increased during the past years. “This has resulted in many international archaeological missions working in this region to race against time trying to explore hidden treasures,” he added.

Waziri praised these Egyptian missions made up of prominent workers, technicians and archaeologists, and hailed their work to reveal the ancient Egyptian civilization to the world.

The Egyptian antiquities missions resumed excavation works in August, after they were suspended in April due to the coronavirus pandemic.

While taking into account preventive measures, the missions are now operating in four regions, namely Tuna El-Gabal in Minya, the Saqqara antiquities region, the Pyramids in Giza and al-Asasif region, west of Luxor, according to Waziri.

The 2019 announcement came at the launch of the winter excavation season. Although expectations were high that the archaeological season would be exceptional, the coronavirus outbreak ended the work of all foreign missions.

In recent years, the Saqqara region has witnessed several important archaeological discoveries. The ministry announced in December 2018 the discovery of a tomb that belongs to Wahtye, a high priest who served during the reign of King Neferirkare in the Old Kingdom’s Fifth Dynasty. The 4,400-year-old tomb was intact and well preserved with distinguished colors. It measures roughly 10 meters (33 feet) in length and three meters (10 feet) in height. The tombs’s walls are decorated with colorful scenes showing the royal priest alongside his mother, wife and other members of his family. It contains large colored statues of Wahtye carved in rock.

In July 2018, excavation works in Saqqara carried out by the Egyptian-German mission of the University of Tubingen uncovered a mummification workshop with connected burial chambers dating back to the 26th and 27th dynasties (664-404 B.C.). The announcement was made during the archaeological survey works in the Cemeteries of the Sawy Age, located south of the Pyramid of Unas in Saqqara. The mission also found a gilded mummy mask inlaid with semiprecious stones that covered the face of one of the mummies in one of the attached burial chambers.

The Egyptian archaeological mission also found in April 2019 a tomb in Saqqara for a person named Khuwy who was one of the nobles living in the era of the Fifth Dynasty in the Old Kingdom. The mission uncovered this tomb while documenting the collection of pyramids that belong to King Djedkare Isesi, a ruler of the Fifth Dynasty.

At the end of last year, the ministry unveiled a huge cache of ancient artifacts and mummified animals in Saqqara. The discovery consisted of a tomb with a number of mummified cats and a statute of a big cat. Crocodiles, cobras and scarab beetles are among the other mummified creatures found at the site, along with statues of other animals and birds. The discovery of the cache, which dates back to the seventh century B.C., includes wooden boxes decorated with hieroglyphics.