An Egyptian archaeological mission discovered the tomb of Ptahemwia, a senior statesman during the reign of King Ramses II, who held several positions, including head of the treasury and royal clerk. 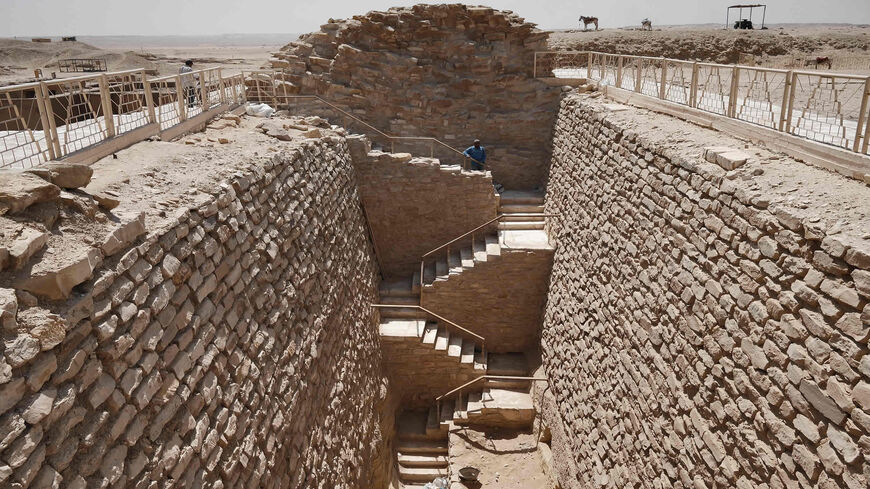 A workman stands along the steps leading to the southern tomb near the step pyramid of the third dynasty Pharaoh Djoser (27th century B.C.), at at the Saqqara Necropolis, Egypt, May 27, 2021. - Amir Makar/AFP via Getty Images

CAIRO — The Egyptian government announced Oct. 30 the discovery of the tomb of Ptahemwia, head of the treasury during the reign of King Ramses II (Ramses the Great), who ruled Egypt for 66 years between 1279 and 1213 B.C.

The Egyptian authorities said in a press statement, "A mission from the Faculty of Archaeology at Cairo University headed by Ola al-Ajezy succeeded in discovering the tomb during excavations in the Saqqara area, south of the ascending road of King Unas.”

Archaeologists and officials in Egypt praised the historical discovery, given the status of the tomb owner and the new information that the tomb can reveal about the reign of King Ramses II. Mustafa Waziri, secretary-general of the Supreme Council of Antiquities, said in statements included in the Ministry of Tourism and Antiquities’ statement, “The discovery site includes the tombs of senior modern statesmen from the era of the 19th dynasty and complementing the site of the tombs of the 18th dynasty, the most important of which is the site of military commander Hor Moheb.”

Waziri continued, “The importance of the tomb stems from the positions held by its owner as the royal scribe, head of the treasury, chief supervisor of livestock and the one responsible for divine offerings in the Temple of Ramses II in Thebes.”

Ajezi, who spearheaded the archaeological mission, told Al-Monitor, “The new discovery is of historical importance and value because it will add new names and information about the reign of Ramses II and military activity during this period.”

She said, “The tomb has a distinctive style dubbed the 'cemetery temple,' as it consists of an entrance in the form of an edifice followed by one or more courtyards; the tomb ends on the west side with shrines for deities topped by a pyramid.”

Ajezi noted, “The mission has not finished its work yet, because it has not yet opened the burial well; only the entrance has been discovered so far. It is not possible to confirm the presence of a mummy inside the tomb until after it is opened.”

She added, “What has been discovered from the tomb is an entrance engraved with scenes, and leading to a hall with painted and colored walls. The existing scenes depict a procession carrying offerings and ending with the scene of the slaughter of a calf.”

She noted, “The carved stone blocks and the Osirian columns found in the sand will be examined so that they can be placed in their original spots inside the cemetery.”

Ajezi said, “The mission has been working since 2005 in the Saqqara region and has made many discoveries, including unearthing the huge tomb of a military leader from the reign of King Seti I, who may be among the participants in the war battles of King Ramses II or King Seti I.”

In an interview with Al-Monitor, Mohamed Othman Elkhosht, president of Cairo University, praised the cooperation between Cairo University and the Ministry of Tourism and Antiquities. He said, “This cooperation resulted in several discoveries, the most recent of which was the tomb of the head of the treasury, and before that the tomb of Mayor of Memphis 'Ptah-Mas,' as well as the supreme commander of the army during the reign of Ramses II, Eurkhi, among others.”

In an Oct. 30 statement, the Egyptian Ministry of Tourism and Antiquities said, “The mission has completed work on the tomb of the supreme commander of the army during the reign of King Seti I and his son King Ramses II.”

In May 2018, the Egyptian Ministry of Antiquities had announced in a press release the discovery of the tomb of the supreme army commander during the reign of King Ramses II (Eurkhi).

Hussein Abdel Baseer, director of the Antiquities Museum at the Bibliotheca Alexandrina, pointed out in a phone conversation with Al-Monitor the historical importance of the tomb, stressing that it “will raise the value of the Saqqara area, given the new information that the discovered tomb contains about the reign of King Ramses II.”

Abdel Baseer said, “The discovered tomb will contribute to attracting more tourists to the Saqqara region.” He called on the Egyptian government to “promote this discovery globally in order to increase tourism rates in the Saqqara region," which he described as the "cemetery" of Egypt through the ages.

According to the State Information Service in Egypt, Ramses II is considered the most powerful and most famous pharaoh of Egypt, as he led several campaigns north to the Levant. In the second battle of Kadesh in the fourth year of his reign (1274 B.C.), the Egyptian forces under his command clashed with the forces of Mwatalis, king of the Hittites, and over the following years neither side was able to defeat the other. For that reason, Ramses II concluded in the 21st year of his reign (1258 B.C.) a treaty with Hattusilis III — the oldest peace treaty in history. He also led several campaigns south of the First Cataract to Nubia.

Ramses II built many temples and statues, most notably the Abu Simbel temple, which has fascinated the world due to the phenomenon of the sun striking perpendicular to the face of the statue of Ramses II twice a year, on Oct. 22 and Feb. 22.