After a recent bust in Giza, archaeologists continued to be alarmed by illegal excavations and antiquities smuggling. 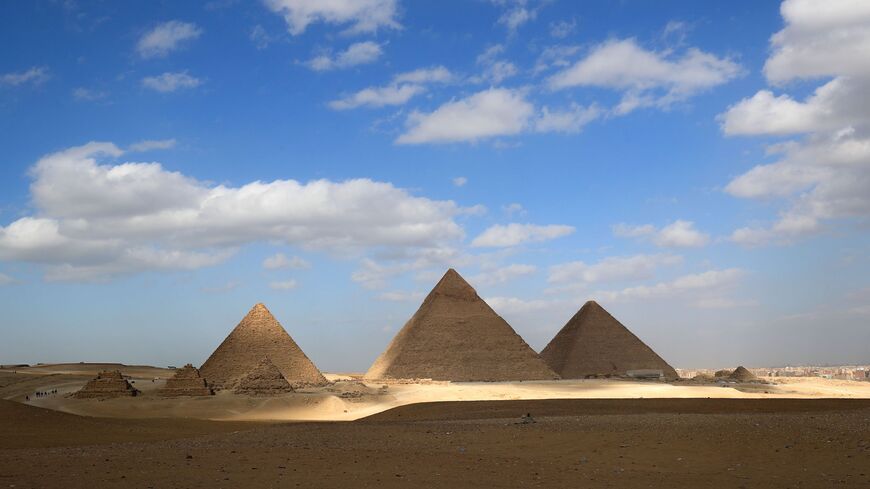 A general view picture shows the Giza pyramids necropolis on the southwestern outskirts of the Egyptian capital Cairo on Jan. 6, 2020. - KHALED DESOUKI/AFP via Getty Images

CAIRO — Three people were arrested for illegally digging for antiquities in a village in the Mit Rahina area, the site of Egypt’s ancient capital of Memphis, in Giza governorate, the Egyptian Ministry of Interior announced Aug. 29.

The arrest led Egyptian security forces to a hole the looters were digging in the area, the ministry added in a statement on Facebook. They found ancient tunnels leading to two limestone rooms engraved with hieroglyphics.

Egyptian archaeologist Hussein Abdel Basir, the director of the Antiquities Museum of Bibliotheca Alexandrina, told Al-Monitor, “It seems the new discovery dates to the era of the New Kingdom in Pharaonic history and the era of Ramses II (1292-1069 B.C.), and it may lead to a temple or a cemetery.”

Mohamed Youssef, director of the Saqqara Antiquities Area, told Al-Monitor that the security services handed over the site to antiquities officials.

“The area where the gang was excavating lies in Mit Rahina, which is full of antiquities,” he said.

Youssef went on, “A committee will be formed to look into the site where the gang was secretly excavating. If the site includes fixed monuments such as a temple, the land will be expropriated and the owners will be compensated. It will be transferred to the Ministry of Antiquities, which will send an archaeological mission."

“Excavations must be carried out around the site to find out what the place is," he explained. "If the authorities find movable antiquities, they will be confiscated.”

Youssef pointed out, “The problem is that in the 1960s, the authorities did not prevent construction in areas that are full of antiquities, so the ancient city was neglected.”

Abdel Basir said that there are many antiquities beneath the site of the ancient city. Some were uncovered in what is called rescue excavations, the official digs that follow illegal excavations. The most recent such discovery was of a statue of King Ramses II.

He pointed out that carrying out archaeological excavations in the area is difficult due to the nature of the land, which was covered by the silt of the Nile over time. He noted, “Although these gangs sometimes lead to important discoveries, they cost us our heritage by smuggling artifacts outside the country.”

In June 2020, the Egyptian government launched a project to develop Mit Rahina. The project includes a tourism map of the temple area in Mit Rahina and establishing a tourist market as well as a visitor center.

Abdul Rahim Rihan, an archaeologist and member of the Supreme Council of Culture, told Al-Monitor that international gangs backed by local financiers took advantage of the economic and social situation in the chaos that followed the 2011 revolution.

Similar illegal excavations have led the Egyptian authorities to an ancient cemetery in the Ain Shams area in December 2021 and the Temple of Ptolemy II in Sohag in 2007.

Those interested in protecting Egypt's ancient heritage often complain of the damage that illegal excavations and smuggling do to antiquities. Controversy erupted in June after reports revealed that the granite stele of Tutankhamun was allegedly smuggled out of Egypt by former Louvre director Jean-Luc Martinez.

In a previous interview with Al-Monitor, Shaaban Abdel-Gawad, general supervisor of the Repatriation Antiquities Department at the Ministry of Tourism and Antiquities, said that the Egyptian government has managed to recover more than 27,000 antiquities from abroad since 2014.

Abdel-Gawad complained of the difficulty in recovering smuggled antiquities acquired via illegal excavations because there is no central archive.

“All [illegal] excavators in Egypt are collecting antiquities with the intention of smuggling them,” said Rihan. He called for tougher penalties for excavations carried out without a license from the Supreme Council of Antiquities.

In 2016, the Daftar Ahwal Research Center for Archiving and Documentation documented 262 antiquities crimes in Egypt including illegal excavations and trafficking in which 956 people were arrested, 48 died, 22 were injured and 11,000 artifacts were seized.