Former Louvre Director Jean-Luc Martinez was accused of conspiring to conceal the origin of artifacts suspected of having been stolen from Egypt during the Arab Spring in 2011, prompting Egyptian demands to return these valuable pieces to Egypt. 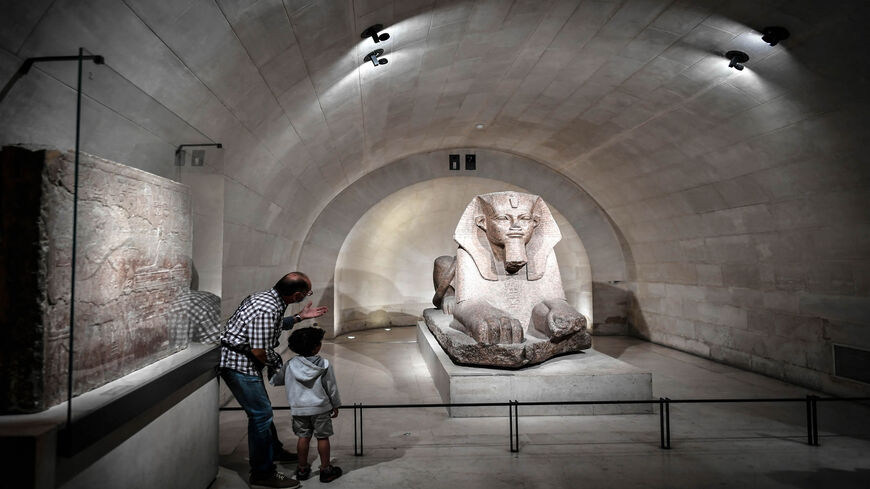 Visitors looks at a sphinx sculpture at the Egyptian department of the Louvre Museum in Paris, France, June 24, 2021. - Stephane de Sakutin/AFP via Getty Images

The French weekly newspaper Le Canard enchaine reported in an article published May 25 that French investigators are currently trying to find out whether or not former Louvre Director Jean-Luc Martinez “turned a blind eye” to forged certificates of five pieces of Egyptian antiquity. Reportedly, those pieces included a granite stele (slab) engraved with the seal of the ancient Egyptian Pharaoh Tutankhamun that was bought by Louvre Abu Dhabi for tens of millions of euros.

In 2018, the Paris prosecutor-general opened a confidential investigation into the case, entrusted to the Central Office for the Fight Against Illegal Trafficking in Cultural Goods. Before the case was assigned to an investigative judge in February 2020, at least three people were charged with being involved in the case, namely well-known French antiquities broker Christophe Kunicki and his husband Richard Semper, as well as Roben Dib, the German-Lebanese owner of an art gallery.

The case against Martinez brought to the fore the issue of Egyptian antiquities that are believed to have been smuggled out of the country following the January 25 Revolution, amid Egyptian demands to return the Tutankhamun piece.

In the wake of nationwide protests in 2011, antiquities were looted from museums, mosques, warehouses and illegal excavation sites. In 2017, the Egyptian Ministry of Antiquities said that 33,000 artifacts had disappeared over the past decades from the warehouses of the ministry and the Supreme Council of Antiquities.

Shaaban Abdel-Gawad, general supervisor of the Repatriation Antiquities Department at the Ministry of Tourism and Antiquities, told Akhbar el-Yom May 28 that Egyptian authorities are following up on the investigation into Martinez’s case, in cooperation with the Ministry of Foreign Affairs, the Egyptian Embassy in France, the International Cooperation Branch in the Egyptian Attorney General's office and all concerned parties.

He said that the piece that was reportedly bought by the Louvre Abu Dhabi bears the seal of King Tutankhamun and is not among the pieces that were discovered in his tomb, but was acquired through illegal excavations and smuggled. “We are currently working on recovering it,” he noted.

In an interview with Al-Monitor, Abdel-Gawad said that the Egyptian government has managed to recover more than 27,000 antiquities from abroad since 2014, including 6,665 artifacts and 21,660 antique coins.

He complained about the difficulty in recovering smuggled antiquities acquired from illegal excavation because they do not have an official archive.

Monica Hanna, Egyptian archaeologist and dean of the College of Archaeology and Cultural Heritage at the Arab Academy for Science and Technology, told Al-Monitor that the absence of the Tutankhamun piece from the official archive records does not mean that Egypt has no right to demand getting it back. “Egypt has the right to request access to the official documents of those artifacts included in the judicial investigation from Louvre Abu Dhabi as well as Louvre France,” she said.

The French newspaper Liberation reported May 26 that the French investigations focused on 12 large antiquities of illegal origin (stolen), explaining that Kunicki sold them to two of the largest museums in the world — the Metropolitan Museum of Art in New York and Louvre Abu Dhabi — for a total of 56 million euros ($60 million).

Among those pieces is the Coffin of Nedjemankh, which Egypt recovered in 2019 from the United States, in addition to the Funeral Set of Princess Henuttawy, an ancient Egyptian princess from the 19th Dynasty that was acquired by Louvre Abu Dhabi for 4.5 million euros ($4.8 million) in November 2014.

Hanna said that the security chaos that followed the Jan. 25, 2011, revolution greatly harmed Egyptian antiquities and heritage, as several archaeological areas were encroached on and many antiquities were smuggled.

Meanwhile, Louvre Abu Dhabi immediately declared itself a civil party in the investigations, which it described as “a scandal of which the museum was the first victim.”

Louvre Abu Dhabi’s lawyer Jean-Jacques Noir said in a May 30 statement, “Louvre Abu Dhabi is a victim of trafficking of Egyptian antiquities, while it is a leading cultural institution known around the world.”

He noted that since the museum has impeccable morals when it comes to such cases, it will do its best to get to the bottom of the issue.

Louvre Paris also announced in a statement that it would do the same, noting its commitment to combat the illicit trafficking of cultural property.

In 2007, Louvre Abu Dhabi was established in virtue of a cooperation agreement with Louvre Paris. According to its official website, the museum applies a strict international protocol for artworks entering the collection, as outlined in the intergovernmental agreement between Abu Dhabi and France.

Hanna pointed out, “Louvre Abu Dhabi formed a secret committee in July 2021 to investigate the five artifacts [that are suspected of having been smuggled] and concluded that these pieces may have been purchased illegally. But the museum is waiting for the investigations to be completed in France and plans to return the artifacts even if Egypt does not demand it.”

She added, “I expect Egypt to recover the artifacts after the investigations are completed,” explaining that France and the United Arab Emirates [UAE] are committed to the UNESCO Convention for the Protection of Cultural Property in the Event of Armed Conflict, and Louvre Abu Dhabi will not violate the moral clause of museums, which prohibits displaying stolen pieces.

Mohamed Basal, legal researcher and editor-in-chief of the Egyptian newspaper Al-Shorouk, told Al-Monitor that Louvre Abu Dhabi will likely return the Tutankhamun piece once the French investigations prove that the documents based on which the museum had bought it from the brokers were forged.

He added, “The UAE is a country that maintains its international image, and Louvre Abu Dhabi is a strongly emerging museum, and it does not wish to gain a negative reputation.”

Basal pointed out that the Coffin of Nedjemankh, which Cairo recovered from Washington, is another factor that enhances the chances of recovering these pieces, explaining that the piece was sold by the same brokers suspected of selling the Tutankhamun piece to Martinez.

“Louvre Abu Dhabi will also likely file a lawsuit in Paris against the brokers to prove its good intentions, just as the French Cybele Gallery did in the case of the Pa-di-Sena piece, which was also recovered by Egypt, and had been sold to the gallery by the same suspicious brokers,” Basal concluded.