The Egyptian Ministry of Antiquities is trying to stop the sale of Egyptian relics in world auctions and is calling for the need to amend the 1970 UNESCO convention on the illicit trade of cultural property. 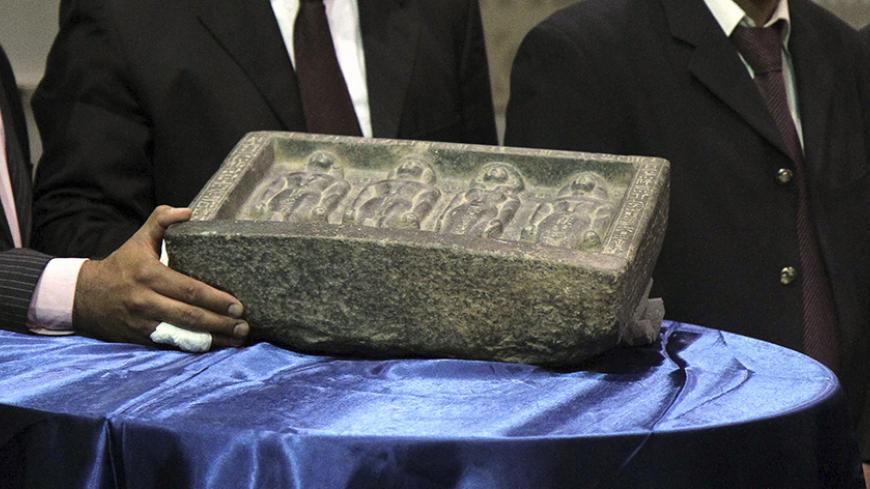 Egyptian archaeologists display one of three ancient artifacts recovered after having been smuggled into Germany to be sold in Europe, at Cairo airport, Egypt, May 3, 2014. - REUTERS/Al Youm Al Saabi Newspaper

Egyptian antiquities continue to be smuggled abroad and put up for international auction. Recently, a set of Egyptian relics was put up for auction in London’s Christie's Auction House, held Dec. 6-15. The gallery posted on its website photos of ancient Egyptian statues of Isis, cats and bulls, as well as ancient Egyptian war tools. This has raised the ire of the Egyptian Ministry of Antiquities, which reached out to the Egyptian Embassy in London to stop the sale at the auction house.

The Egyptian efforts were to no avail, as a bronze statue of the Goddess Isis and her son Horus were sold at the auction for $1,382,290. The statue dates back to 747-656 B.C. and was sold during the first days of the auction.

Another auction was held at the Toledo Museum of Art in Ohio in October, where 23 Egyptian artifacts were sold.

According to Shaaban Abdel-Gawad, the director general of the Department of Recovered Antiquities within the Ministry of Antiquities, world museums display collectibles but do not sell them, which is approved by the ministry, as it sees this as a good advertisement for Egypt. He added that the incident of the US auction is unprecedented, but the museum has the right to sell relics. That is why Egypt has raised its objection in a bid to prevent other museums from following the same path.

Abdel-Gawad told Al-Monitor, “The ministry is taking necessary steps to stop the selling of Egypt’s relics in international auctions by following up on the auctions that are being held around the world and checking if the missing artifacts at home are being displayed in any of the exhibitions and auctions.”

“In case it was proven that some of the missing relics were put up for auction somewhere in the world, the ministry would get in touch with the auction house or the host country to seize back the archaeological pieces by virtue of ownership documents showing that they belong to the Egyptian state,” Abdel-Gawad added. “If there were no documents to this effect, due to many illegal excavation works and thefts of relics in Egyptian museums and archaeological stores especially after 2011, we deal with the matter in our capacity as the country of origin of such relics, and we require the concerned auction house to provide documents proving its ownership of the archaeological pieces.”

Commenting on other obstacles preventing Egypt from recovering relics from international auctions, Abdel-Gawad said, “The local governing laws in the countries where such auctions are being held are the biggest challenge for us. We are dealing with about a hundred countries and most of them allow the antiquities trade, while other countries did not sign the 1970 UNESCO convention, whereby the antiquities trade is criminalized.”

The US State Department announced in a statement Nov. 30 that Secretary of State John Kerry and his Egyptian counterpart Sameh Shoukry signed a memorandum of understanding on the protection of cultural properties, whereby the United States will impose restrictions on exporting any archaeological relic related to Egyptian cultural heritage dating from 5200 B.C.-A.D. 1571.

Abdel-Gawad said, “The ministry has set forward a strategy to conclude agreements similar to the archaeological convention with the United States, whose most essential part is that it will be applied to all the American states, regardless of the different governing laws in every state. The ministry was also successful in convincing Germany to amend its laws on archaeology to bind German auction houses to provide documents proving the ownership of displayed archaeological relics without the need of the country of origin of such relics to prove its ownership in this regard.”

Abdel-Gawad added, “The ministry has succeeded in recovering 1,200 artifacts between 2011 and 2016 and about 6,000 pieces between 2002 and 2011. Additionally, four relic pieces were recovered from the United States during the month of November.”

Commenting on the cooperation of the Egyptian parliament in recovering smuggled relics, Abdel-Gawad said, “Parliament has been cooperative, and we will introduce its members to the ministry’s strategy to conclude bilateral agreements with countries, especially those sharing borders with Egypt, so as to prevent the establishment of any smuggling corridors, to Sudan, Libya and Jordan, for instance. This is especially true since Egypt’s agreement with Jordan to this effect has resulted in seizing 340 artifacts in the Aqaba port, which will be recovered in the coming days. This is not to mention agreements with Western countries to facilitate the restoring of relics procedures and to remove all obstacles.”

Abdel-Gawad added, “Auctions refuse to reveal the identity of the buyers, which usually means losing all track of the pieces.”

He noted, “Egypt has been demanding the amendment of the UNESCO 1970 Convention on the Means of Prohibiting and Preventing the Illicit Import, Export and Transfer of Ownership of Cultural Property to include all relics that had been looted and stolen before that date. It is also demanding that the auction houses be responsible for providing proof of ownership of any relics they are displaying instead of the concerned country of origin.”

He also said that many countries whose relics have been smuggled and stolen, such as Iraq, Saudi Arabia and China, among others, want to cooperate with Egypt to pressure UNESCO to amend the convention’s articles in this regard.

For his part, Bassam al-Chammah, a historian and Egyptologist, told Al-Monitor that he is calling for a mass petition, whereby the signatures of Egyptians are collected to pressure UNESCO to amend the convention and stand by Egypt to recover its missing artifacts by facilitating legal proceedings and pressuring other countries to return related relics and pieces.

Egyptian relics and artifacts will continue to be sold at auctions around the world unless the UNESCO convention is amended. Egypt has to be swift in concluding agreements with countries that are hosting such auctions and agree with them not to sell Egyptian relics unless they have secured ownership papers and until the UNESCO convention is amended to include the recovery of lost relics prior to and after 1971.