Egyptian and German archaeologists have been working for 15 years to uncover the ruins of a city, the center of sun worship, in the Matariyyah region east of Cairo. This month, they revealed the remains of one of its temples belonging to King Nectanebo I. 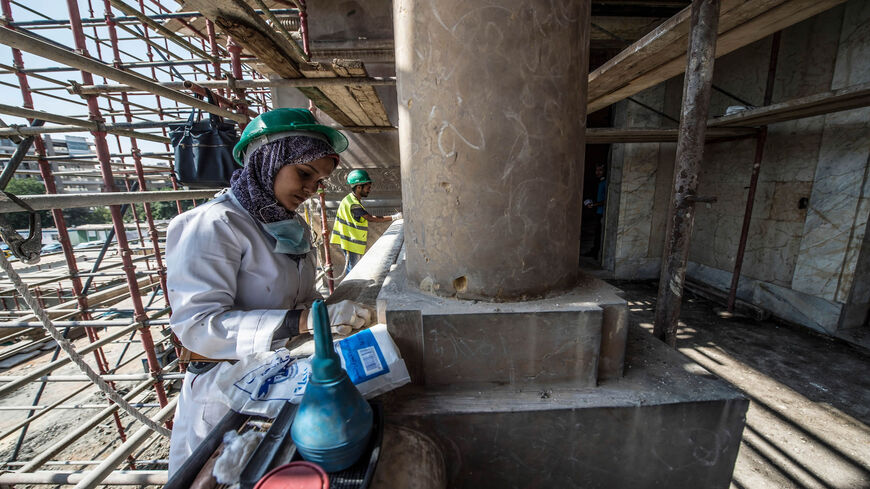 CAIRO — The Egyptian-German archaeological mission operating at ​Matariyyah archaeological area announced Nov. 5 a new archaeological discovery. It consists of parts of the western and northern facade of the temple of King Nectanebo I (380-363 B.C.) located at the center of the Great Temple of Heliopolis at Matariyyah, east of Cairo.

Archaeologists say that the new archaeological discovery sheds light on more secrets related to the City of the Sun, Heliopolis, which is the most ancient capital in the world and most ancient religious, scientific and philosophical center, before Egypt coalesced around 3100 B.C.

The mission, which has been working in this archaeological area for about 15 years, found many basalt blocks engraved with the names of parts of Lower Egypt, including blocks that represent the nomes of Heliopolis, in addition to blocks of the other nomes in Lower Egypt, the secretary-general of the Supreme Council of Antiquities, Mustafa Waziri, said in a statement.

According to the statement, Dietrich Rau, head of the German team, said that the western part of the main axis of Nectanebo’s Temple was studied. Different evidence point to buildings dating back to the Middle Kingdom, the 22nd Dynasty of Egypt (Osorkon I, 925-890 B.C.) and a shrine to god Shu and goddess Tefnut commissioned by Psamtik II (595-589 B.C.).

The team unearthed parts of Ramses II statue, part of the baboon statue, a pedestal and parts of a quartzite obelisk from the reign of Pharaoh Osorkon I, and parts of worship items such as an offering table for Pharaoh Thutmosis III (1479-1425 B.C.), according to Rau.

The excavations revealed evidence on the activity of the 13th Dynasty’s kings and the Ptolemaic era.

Ayman Ashmawy, head of the Ancient Egyptian Antiquities Sector at the Supreme Council of Antiquities, told Al-Monitor that the discovery is very important and is a continuation of the recent discoveries in the sun temples and the royal support they received. He said that it also gives a clearer picture of the places that were destroyed in later ages in Ain Shams (east of Cairo).

In May 2016, the archaeological mission working there unearthed for the first time the eastern gate of the temple of Pharaoh Nectanebo I of the 30th Dynasty of Ancient Egypt, who spent most of his reign defending his kingdom from reconquest of the Persians with the assistance of Sparta or Athens from time to time. That was before parts of the western and northern gate were found last week, he noted.

Ashmawy explained that the inscriptions in the stones refer to the 13th and 14th year of Nectanebo's reign (367-366 B.C.), as well as the materials used in the temple and their dimensions. He noted that some of the stones have incomplete inscriptions, probably insinuating that no further decorative work was performed on the temple after the death of Nectanebo I in 361 B.C.

He said that these discoveries point to the continued royal support and investment in the sun temple of Ra, the creator god of Ancient Egypt, in Heliopolis.

The sun god Ra was associated with one of the oldest creation theories emanating from the school of Heliopolis, known as the Ennead theory (a group of nine deities in Egyptian mythology worshipped at Heliopolis), according to which the world before the existence of the gods was an endless ocean (Nun, god of the water) out of which the great god Atum (Ra-god of the sun) appeared and rested on a hill above those waters. When he felt lonely, he created other companions, including Shu (god of air) and Tefnut (deity of moisture), who got married and gave birth to Nut (sky goddess) and Geb (earth god).

The discovery indicated that the temple was then used as a quarry to build obelisks and temples in the Roman era, and that in the Islamic eras the Egyptians used their stones to build their homes and other facilities.

The Egyptian official said that unearthed antiquities will be displayed in the open museum in Matariyyah after the completion of the restoration works.

In February 2018, the Egyptian Ministry of Antiquities inaugurated the Grand Egyptian Museum in Masala, in Matariyyah to tell the history of the most ancient Egyptian city, Heliopolis.

The museum includes 135 artifacts dating back from the Old Kingdom to the New Kingdom, most notably the obelisk of King Senusret I, and other obelisks of the area, including part of the obelisk of Pharaoh Teti I, one of the kings of the 6th Dynasty.

Hussein Abdel Basir, director of the Antiquities Museum at the Bibliotheca Alexandrina, said that the discovery is very important and confirms that Matariyyah is located in a sea of ​​statues.

That city was very famous throughout the ages, and according to the Bible, Prophet Joseph was married there to a daughter of Potiphar, a high priest of Heliopolis, as well as Virgin Mary’s tree in Heliopolis and the Arab Islamic conquest, he said.

However, the city disappeared and was destroyed by the silt that accumulated over the ages due to the flooding of the Nile River, similar to many archaeological areas in the Delta region and Cairo. The slums built in recent decades made things worse, according to Abdel Basir.

Nevertheless, he noted that many archaeological discoveries have yet to be unearthed in Matariyyah area where remnants and ruins of the ancient religious city are still buried. These discoveries will revive the city's famous landmarks and reveal them to the public.