An Egyptian-German archaeological mission working in Matariya discovered granite stone blocks from the era of King Khufu in the Temple of the Sun, in addition to other rare artifacts. 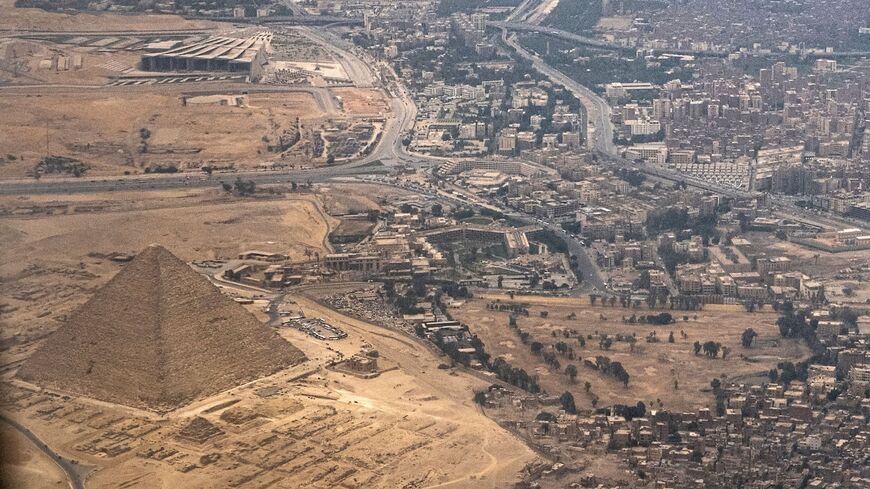 This picture taken on April 22, 2022 shows an aerial view of the Great Pyramid of Khufu (Cheops) and (top-L) the under-construction Grand Egyptian Museum (GEM),expected to be inaugurated later in the year, on the outskirts of Giza, the twin city of Egypt's capital Cairo. - AMIR MAKAR/AFP via Getty Images

CAIRO — On June 13, the Egyptian Ministry of Tourism and Antiquities announced the discovery of granite stone blocks from the era of King Khufu in the Temple of the Sun, in addition to foundations from the temple’s courtyard, dating back to the New Kingdom.

The discovery happened during excavations by the Egyptian-German archaeological mission on the western side of the open museum at the obelisk of King Senusret I in the Matariya area, east of Cairo.

The discovery is "the first time that antiquities from King Khufu’s reign are discovered in this area," the Secretary-General of the Supreme Council of Antiquities Mustafa Waziri said in a June 13 statement "Those stone blocks may have been parts of an unknown building or may have been moved from the Giza pyramids area to be used as building materials during the Ramesside era, a period in which the use of stones from historically older buildings was common.”

Ayman Ashmawy, head of the Egyptian Antiquities Sector at the Supreme Council of Antiquities and head of the Egyptian mission that made the discovery, told Al-Monitor, “This discovery reflects the importance of the Matariya area, which is the most important place in ancient Egypt. The Temple of the Sun had a great historical and religious importance for all kings throughout Egyptian history, and we can say that we found antiquities that are rare to find elsewhere.”

The mission "succeeded in uncovering many archaeological layers dating back to the Naqada III period, with layers of pottery rubble, which indicate the presence of religious activity in this site,” he said. “The mission also found a piece of granite belonging to King Pepi I of the Old Kingdom from the period of building the pyramids, with reliefs of the falcon of Horus.”

Another finding, he said, was "several statues in the form of a headless Sphinx. Most importantly, we found a small piece bearing Sphinx statues placed in a unique way, along with a 3D deer, representing an offering.”

Ashmawy stressed, “This discovery is particularly significant because it shows the extended and large presence of the Egyptian kings and their dedications to the Temple of the Sun. When we found King Khufu’s cartouche (a rock plaque bearing the king’s name), it was a great addition that indicates the kings’ interest in the temple because sun worship was the main religion in ancient Egypt in general.”

According to the Egyptian Ministry of Antiquities, the base of a statue of King Amasis (Ahmose II) was also discovered, in addition to many altars on which sacrifices were made, and many parts of statues in the form of the Sphinx, which are considered evidence of the royal presence in the temple.

The head of the mission’s German team, Dietrich Rau, said in a statement on June 13, “The mission also succeeded in discovering parts of sarcophagi and altars from the eras of kings Amenemhat IV, Sobekhotep IV, Ay, Seti I, Osorkon I, Takelot I, and Psamtik I, in addition to a quartz sculptural model in the form of the Sphinx belonging to King Amenhotep II and the base of a huge statue of a monkey made of pink granite.”

Ahmed Badran, professor of archeology and ancient Egyptian civilization at Cairo University, told Al-Monitor, “King Khufu’s fame in ancient Egyptian history goes back to his Great Pyramid in the Giza Pyramids area." The 146-meter monument was one of the seven wonders of the ancient world and registered on the World Heritage List.

Badran explained, “The Egyptian-German mission has been working in the Matariya area for about six years, and has made many archaeological discoveries, among which was the huge statue of King Psamtik I of the 26th Dynasty (in 2017), which was transferred to the Grand Egyptian Museum next to the pyramids. Then 4,500 artifacts belonging to King Psamtik were discovered later on (in 2018).”

The recent discovery is important, he said, because "it bears the name of one of the most important kings in ancient Egypt, as the granite stone pieces bear cartouches in the name of King Khufu, and it is more likely that these stones are the remains of a maqsura (small building) built by King Khufu for Ra, the oldest solar deity in the ancient capital.”

Badran stressed, “This discovery sheds more light on one of the oldest capitals in ancient Egypt called the City of the Sun, and the presence of a great temple there.”

Meanwhile, Ashmawy noted, “The Egyptian-German mission is still continuing its work to complete its excavations to uncover more artifacts, and to carry out documentation work for this latest discovery."

by Ismail BELLAOUALI with Philippe AGRET in Rabat and Marie GIFFARD in Madrid | AFP | Jun 24, 2022
END_OF_DOCUMENT_TOKEN_TO_BE_REPLACED