Egypt has finished restoring one of the seven shrines in the Temple of Seti I in southern Egypt, dedicated to the worship of Amun-Ra about 3,500 years ago. 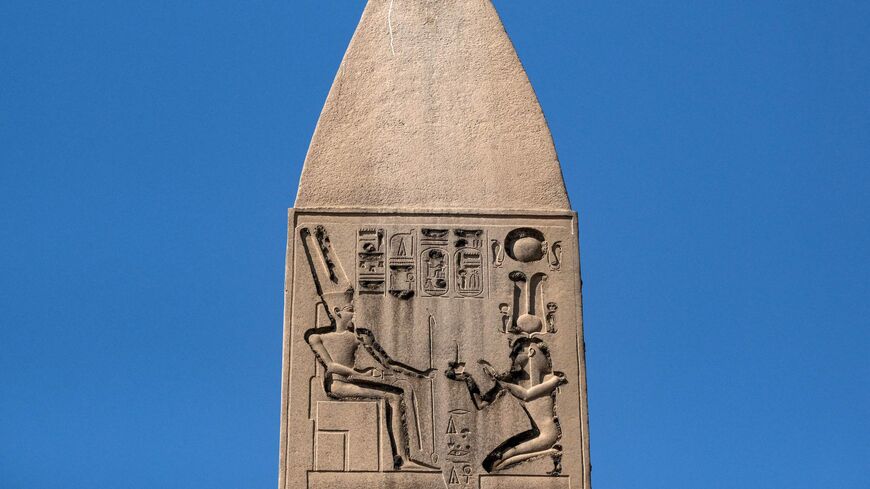 This picture taken on Jan. 19, 2022, shows a view of the top of the Luxor Obelisk in Egypt's southern city of Luxor, displaying a relief of the obelisk commissioner Pharaoh Ramses II making an offering to the god Amun-Ra. - AMIR MAKAR/AFP via Getty Images

CAIRO — A team of restorers and archaeologists from the Egyptian state-owned Supreme Council of Antiquities has recently completed restoration work on the shrine of the ancient deity Amun-Ra, one of the seven chapels in the Temple of Seti I in Abydos in southern Egypt’s Sohag governorate.

In a press statement released by the Supreme Council of Antiquities on Aug. 21, Muhammad Abdel-Badi, the head of the Central Administration of Upper Egypt Antiquities, explained that in the rear of the shrine, a there is a symbolic door and scenes depicting the boat journey to the underworld as well as religious rituals and offerings to Amun-Ra.

The statement quoted Saadi Zaki, director of restoration for Upper Egypt Antiquities, as saying that the restoration works took about three months and included removing dirt and soot first with brushes by hand and then with a chemical cleaning procedure.

He added that some of the walls and ceiling were rebuilt, the colors were brightened and finally the entire room was insulated.

Hussein Abdel Basir, director of the Antiquities Museum of Bibliotheca Alexandrina, told Al-Monitor, “A shrine in ancient Egypt was tantamount to a mihrab, a holy place where priests used to perform daily and funeral services in the temple.”

“The Temple of Seti I includes seven shrines of the following deities: Horus, Isis, Osiris, Ra-Horakhty, Ptah and Amun-Ra, as well as the chapel of King Seti I, who believed he was a god and designed a shrine for himself,” Abdel Basir explained.

He added, “The Abydos area was a sacred spot for the god Osiris and a site for annual pilgrimages,” and stressed that Amun-Ra was one of the most significant deities in the modern state era, especially in the Thebes area.

“Therefore, Amun-Ra’s shrine is considered one of the most important monuments in the area. The connection between Seti I and the god is evident in the shrine's drawings and inscriptions on the walls,” he said.

The archaeological area of Abydos is one of Egypt’s oldest cities and home to the first Egyptian kings. One of the richest archaeological sites in Egypt it was called “Abju,” meaning the land of the great, of which “Abydos” was derived. The ancient city was a center for the worship of the deity Khenti-Imentiu before it became the same for Osiris.

Abdul Basir explained, “King Seti I was a great warrior and had great military achievements in the Near East. During his era, interest in art emerged. That is why he is considered one of the most important kings of ancient Egypt. Had it not been for the fame of his son, Ramses II, which overshadowed the king’s life story, Seti I would have had a greater reputation historically.”

Before taking up the throne, King Seti I was a military officer. After he was coronated, he led various campaigns in Libya and the Levant. During his reign, battle scenes were extensively depicted across walls of Egyptian temples.

Ahmad Badran, a professor of archeology and ancient Egyptian civilization at Cairo University, told Al-Monitor, “The Temple of Seti I is distinguished from the rest of the Ramesside temples by its L-shaped architectural design. It also has seven shrines, as opposed to only one in other temples.”

“The shrine of Amun-Ra is located opposite the entrance to the temple and is characterized by its colorful inscriptions that show King Seti I performing daily service rituals and worshiping the deities,” he added.

Badran explained, “The temple is known for its bright colors. But over time, dust and dirt settled on the drawings and inscriptions, meaning that work was required to restore the original colors, giving the temple greater luster and splendor and highlighting the ingenuity of ancient Egyptians in using colors from natural sources that were mixed with other products such as egg whites to make them last.

Badran said that the restoration work of shrines will boost tourism, as tourists are interested in shrines in their original condition and original colors as built by ancient Egyptians more than 3,500 years ago.

In the Supreme Council of Antiquities’ Aug. 21 press statement, council head Mostafa Waziri said that the council is planning to restore all the temple’s chapels and that the restoration of the shrine of the god Ra-Horakhty has recently begun.