The Egyptian Ministry of Antiquities announced its readiness to cooperate with Iraq in recovering its stolen and looted antiquities, especially from Turkey, where the looted Iraqi artifacts are displayed in museums. 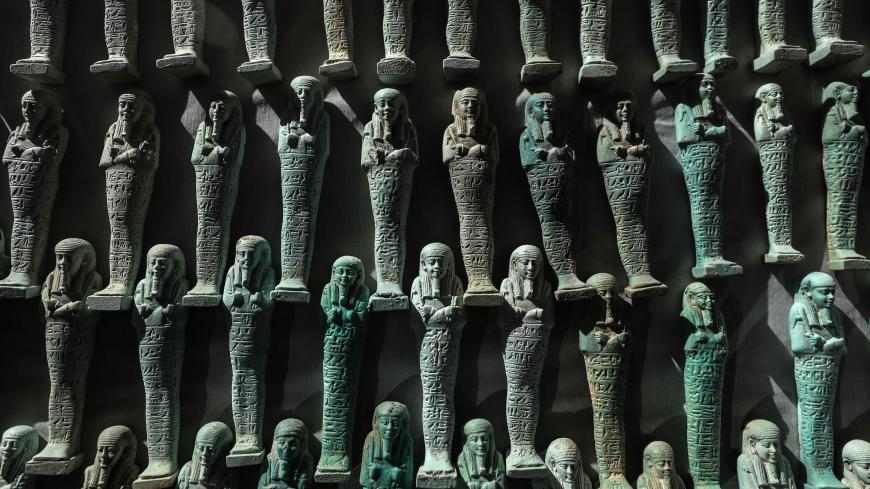 A collection is seen of Ushabtis or funerary figurines discovered among many archaeological finds in 3,000-year-old communal tombs dedicated to high priests, in Al-Ghoreifa in Tuna al-Jabal, Minya governorate, Egypt, Jan. 30, 2020. - Mohamed El-Shahed/AFP via Getty Images

The Egyptian parliament has recently demanded the Egyptian Ministry of Antiquities to support Iraq in retrieving its stolen antiquities found in Turkey.

On Jan. 31, member of parliament Mahmoud Issam said during an address to parliament, “The Egyptian parliament welcomes the cooperation with its Iraqi counterpart in the antiquities field in terms of restoring Iraqi artifacts that were destroyed during the wars and recovering antiquities that were smuggled out of the country toward Turkey in particular.”

The Egyptian Antiquities Ministry announced Jan. 23 its readiness to support Iraq in recovering its looted and stolen antiquities.

On Dec. 24, 2020, Egyptian Minister of Antiquities Khaled al-Anani had agreed with his Iraqi counterpart, Hussein Kazem, to boost cooperation and tap the expertise of archaeologists and restorers in the two countries by exchanging experiences and cooperating for the recovery of stolen and smuggled antiquities.

Shaaban Abdel-Gawad, head of the Egyptian Antiquities Ministry's Department of Recovered Antiquities, told Al-Monitor, “There is cooperation between Egypt and Iraq in training Iraqis in the field of recovering looted antiquities.”

He pointed to Egypt’s extensive experience in the field of antiquities recovery. “We welcome the formation of an archaeological alliance with Arab countries — especially those experiencing internal crises and wars such as Yemen, Iraq and Libya — in a bid to preserve antiquities and recover smuggled ones,” he said.

He added, “The Egyptian Ministry of Antiquities will train Iraqi cadres on how to track down looted Iraqi antiquities in all countries and on the methods of legal prosecution to prove Iraq’s eligibility to recover those antiquities."

The Egyptian-Iraqi cooperation on the retrieval of smuggled antiquities falls within the framework of Cairo's desires to help Baghdad recover its antiquities, especially from Turkey, which is one of the countries benefiting the most from the smuggling of Iraqi artifacts.

The Iraqi authorities announced in 2018 that they had foiled one of the largest smuggling operations of antiquities to Turkey, valued at $13 million. The Iraqi Interior Ministry said at the time that the defendants confessed to being professional smugglers and had an agreement with a person based in Turkey to hand over the antiquities at the Turkish border.

The London-based Al-Arab newspaper reported in an article — titled “Turkey's museums boast stolen antiquities of Arabs” — that the Istanbul Museum of the History of Science and Technology in Islam displayed in its Oriental pavilion one of the most prominent Iraqi archaeological paintings, consisting of a panel of the Iraqi Babylonian Ishtar Gate.

Raafat al-Nabrawi, former dean of the Faculty of Archaeology at Cairo University, told Al-Monitor, “Iraq is facing attempts by Turkey and other Western countries to obliterate its identity by stealing the country’s antiquities.”

He added, “Egypt has not done what other countries, like Turkey, did when stealing Iraqi antiquities. On the contrary, the Egyptian Ministry of Antiquities has worked to return the stolen Iraqi artifacts and Anani officially announced Egypt’s readiness to restore Iraqi antiquities.”

In 2017, Egypt returned to Iraq a number of Iraqi antiquities that were confiscated in Egypt. Back then, Anani handed over to the Iraqi ambassador in Cairo 44 antique coins dating back to the royal period in Iraq from the reigns of Kings Faisal I, Faisal II and Ghazi I.

Also in 2017, Anani expressed Egypt's willingness to restore the damaged Iraqi antiquities, train Iraqis in the archaeological field and allow Iraq to benefit from Egypt's expertise in preserving its own antiquities and restoring those damaged by terrorist operations.

Nabrawi said the Egyptian Antiquities Ministry has the capacity and capabilities to support Iraq in restoring and preserving its antiquities and training Iraqis. He called on the ministry to hold joint archaeological exhibitions with Iraq in both countries.

In a related context, Junaid Amer, an Iraqi archaeologist who works at the National Museum of Iraq in Baghdad, said a large number of Iraqi antiquities were stolen or destroyed during the war with the Islamic State that began in 2014. A number of archaeological sites were destroyed and many artifacts were smuggled out of the country at that time.

Amer told Al-Monitor, “The Egyptian-Iraqi agreement for the recovery of smuggled antiquities is of major importance. Egypt has extensive experience in the field of antiquities, their restoration and recovery. Iraq needs concerted Arab and European efforts to bring back home its [stolen] antiquities and parts of its heritage. Iraqi antiquities have been smuggled to Turkey in light of the crises on the borders with Turkey. This prompted the Iraqi Ministry of Antiquities to conclude an agreement with Turkey [in 2019] to recover Iraqi antiquities, and many antiquities smuggled to Ankara were recovered as a result.”

Ahmed al-Suhail, an Iraqi journalist at Independent Arabia, said the prevailing chaos in Iraq and the control by several armed groups loyal to a number of countries, including Iran, are behind the phenomenon of Iraqi antiquities smuggling.

Suhail told Al-Monitor, “Many Iraqi antiquities were smuggled across the Turkish border in light of Iraq's internal crises and the chaos stirred by armed groups.”