How Egypt’s antiquities minister plans to lure back tourists

In the aftermath of the January 25 Revolution, Egypt’s antiquities and tourism sectors are suffering. 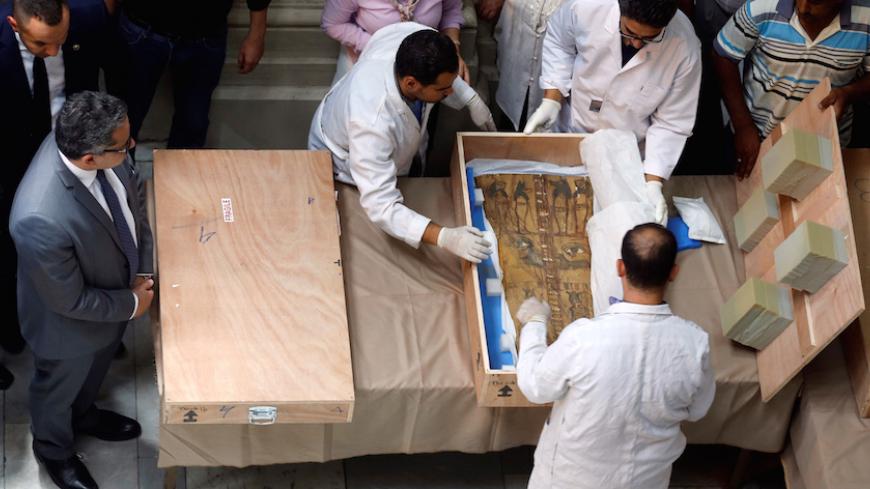 Egyptian Minister of Antiquities Khaled El Enany (L) and antiquities officials uncrate a sarcophagus lid during a ceremony after its repatriation from Israel at the Egyptian Museum in Cairo, June 21, 2016. - REUTERS/Amr Abdallah Dalsh

The Ministry of Antiquities has been facing many challenges of late amid successive economic crises and the decline of tourism in Egypt. Lack of funding has been at the core of the ministry’s problems, which is hindering many security measures needed for archaeological sites and delaying the start of major projects.

However, Khaled al-Anani, who became minister of antiquities March 24, has been trying to think outside the box in search of other alternatives for financing. He has been working on promoting tourism by creating new tourist attractions. He opened the royal rest house of King Farouk for visitors after it had been closed for five years, following the January 25 Revolution. Anani also announced the inauguration of the Mallawi Museum in September. On Aug. 13, 2013, the museum was stormed by 13 thieves, who stole 1,040 artifacts, following the completion of restoration works.

In an interview with Al-Monitor, Anani said that the ministry is still suffering from the aftermath of the January 25 Revolution. “Before the outbreak of the revolution, the ministry’s revenues amounted to 100 million pounds [$11.2 million] a month, whereas now they range between 20 million and 26 million pounds a month, nothing more, while we need about 80 million pounds to pay the salaries of the ministry’s employees and staff. We are facing a serious problem in being able to pay salaries, and we are seeking to get a monthly subsidy from the government to fill this deficit, until the situation is back to normal,” he said.

Anani noted that the ministry is setting forth a plan to equip the ministry’s security personnel within the limits of available resources in order to provide security at archaeological sites.

Commenting on the status of Jewish antiquities and the frequent complaints that they are not being taken care of, with more focus being given to Islamic and Coptic monuments, Anani said, “I am the Egyptian minister of antiquities, the primary one responsible for every archaeological site in Egypt — be it Islamic, Coptic or Jewish, without distinction. Jewish relics are an essential part of Egypt’s heritage, and we already have a plan to start revamping works in all 11 of Egypt’s synagogues. We started with the synagogue of Moses Maimonides. We restored the temple and reopened it to the public. We will start revamping works in the Eliyahu Hanavi Synagogue in Alexandria.”

Al-Monitor:  It has been more *than four months since you assumed your position as minister of antiquities. What are the most challenging problems you have encountered thus far?

Anani:  In fact, there have been many obstacles, mainly the decline of tourism in Egypt, as the situation has not returned to the way it was before the January 25 Revolution in 2011. This is not to mention that the ministry is self-funded and does not receive any support from the state, as it has its own revenues. Before the outbreak of the revolution, the ministry’s revenues amounted to more than 100 million pounds, as tourism was booming, not to mention the international exhibitions the ministry used to organize in the various countries of the world. This was the first challenge. The second challenge is that the ministry has started working on many major projects at the same time, which need millions of pounds to be implemented. We had also [planned] to reopen museums in Sharm el-Sheikh, the governorates of Soah and Kafr al-Sheikh, but we have failed to do so. The third challenge lies in the fact that there are so many archaeological sites that are left without security, which led to illegal drilling pits following the revolution because of the prevailing chaos of the state of security. Another challenge is the need to register all Egyptian monuments, but the ministry does not have any special department to this effect.

Al-Monitor:  We know that the Ministry of Antiquities is self-funded, relying on ticket sales and other revenues from sites the ministry oversees. How did it deal with the crisis when revenues plummeted following the decline in tourist numbers? Is it possible for the ministry to continue to fund itself without support from the state?

Al-Monitor:  When will tourism go back to normal? What are the steps taken by the ministry to attract tourists?

Anani:  I would like to stress those relics and antiquities are not an alternative for tourism. Whatever measure we take will not make the same income the tourism sector used to generate. However, we came up with several ideas to boost tourism. For instance, we held archaeological reproductions exhibitions, which achieved 150,000 pounds in proceeds in the first few days. This has generated good returns for the ministry and the idea was well-received by many ambassadors in Egypt, who relayed it to their countries and requested organizing exhibitions in their own countries. This would shift the focus once again to Egypt, in addition to reductions on agricultural awareness books, discounts on entry fees to all archaeological sites, making special offers for foreigners who have been in Egypt for long periods of time, which could increase the country’s income in foreign currency.

Al-Monitor:  Many archaeological sites have seen illegal excavation and looting. Why has the ministry not provided the necessary technological means and human resources to provide these sites with the necessary security?

Anani:  This is wishful thinking. As a minister of antiquities and university professor, I am well aware of the significance Egypt’s antiquities and I deeply appreciate demands calling for securing archaeological sites, as they reflect the citizens’ awareness of their importance. The pertinent question, however, is how to secure the necessary funds to do so? We need to increase the number of guards in archaeological sites and perhaps arm them to face the outlaws. We could also build fences around the sites, set surveillance cameras and high-level security devices. We wish to take all the necessary measures, but given our limited financial resources, we are unfortunately unable to set this security system.

Yet what I can say is that there is a good plan to rehabilitate the ministry's security personnel to secure and protect these sites from thieves and drillings, based on the available capabilities.

Al-Monitor:  Magda Haroun, the president of Egypt's Jewish community, has questioned the neglect of Jewish monuments in Egypt, saying that the ministry is deliberately neglecting them until they are destroyed. Is that true?

Anani:  I am the Egyptian minister of antiquities, the primary one responsible for every archaeological site in Egypt — be it Islamic, Coptic or Jewish, without distinction. Jewish relics are an essential part of Egypt’s heritage, and we already have a plan to start revamping works in all 11 of Egypt’s synagogues. We started with the synagogue of Moses Maimonides. We restored the temple and reopened it to the public. We will start revamping works in the Eliyahu Hanavi Synagogue in Alexandria. These are Egypt’s treasures that cannot be wasted.

Al-Monitor:  The Ministry of Antiquities announced a plan to redevelop the pyramids to make the site more accommodating for visitors. Is the ministry done with the redevelopment?

Anani:  We are almost done with the redevelopment, and I assure you that the project consists of a major boom for the pyramids, as it includes a complete security system and surveillance cameras to provide the area with full protection — to ensure a safe environment for foreign tourists to see Egypt’s ancient landmarks.

Al-Monitor:  Smuggling and trafficking antiquities is widespread in Egypt. How is the ministry combating these activities that have become a threat to the national heritage?

Anani:  Unfortunately, this phenomenon has become widespread following the revolution, and we are working to counter it with full force, by recording all Egyptian antiquities that are easy to be recovered from countries they entered. The recovery of smuggled antiquities committee resumed work in May to communicate with various countries to recover the Egyptian antiquities.

Al-Monitor:  How did the ministry deal with countries whose domestic laws allow the entry of smuggled antiquities?

Al-Monitor:  Some are calling for stronger sanctions to be imposed on traffickers and thieves, even the death penalty. Why has the ministry not acted in this regard?

Anani:  The bill to protect antiquities was submitted to parliament and I am sure that the [members of parliament] will make a decision that protects Egyptian antiquities.

Al-Monitor:  Over two years ago, on Jan. 24, 2014, a terrorist attack targeted the Museum of Islamic Art, which contains unique Islamic treasures. Is the ministry done with the restoration works? When will the museum be opened?

Anani:  We are done with the restoration of the Museum of Islamic Art, which is the largest museum of Islamic antiquities in the Muslim world, after the brutal terrorist attack on Jan. 24, 2014, with a total cost of 57 million pounds. The UAE [United Arab Emirates] provided us with a grant of 50 million and the other 7 million were granted by various countries, such as Italy, France and the United States, plus UNESCO.

Al-Monitor:  When will the Grand Egyptian Museum, whose opening was delayed, be opened?

Anani:  The opening of the Grand Egyptian Museum was delayed more than once, due to the January 25 Revolution of 2011, and subsequent chaos and poor construction work. Yet this museum will be the largest museum in the world of antiquities to accommodate 5 million visitors. This is in addition to other buildings for commercial and recreational services, a restoration center, the museum garden, a meetings hall, theater, 3D movie theater and archaeological library.

In the past 1½ years, construction works have boomed, and the Egyptian antiquities were moved there. These new projects will surely help reactivate tourism.

We are waiting for a response from Japan regarding another loan to complete the construction works in the coming weeks. The construction of the Egyptian Museum has been carried out in collaboration with Japan since the beginning of the project.

Al-Monitor:  The Mallawi Museum was subject to looting activities in August 2013. Did the ministry succeed in recovering stolen antiquities? When will the opening take place?

Anani:  One thousand fifty out of 1,080 artifacts were stolen from the Mallawi Museum on Aug. 14, 2013. We managed to recover more than 800 artifacts and redeveloped the museum to open its doors to visitors. We are done with the redevelopment at a total cost of 10 million [Egyptian] pounds. The museum will be open to visitors in the first week of September.

Al-Monitor:  What about the National Museum of Egyptian Civilization?

Anani:  The National Museum of Egyptian Civilization is one of the most important projects of the ministry. It is located in al-Fustat city, which was established by Amr ibn al-'As in A.D. 640 over an area of ​​25 feddan [26 acres]. It is the only museum displaying the various eras of the Egyptian civilization. It should include 50,000 artifacts reflecting the Egyptian civilization’s evolutionary stages and the achievements of the Egyptian people in the various fields of life since the dawn of history until the present day. It also contains models, photographs, manuscripts, paintings, masterpieces and artifacts dating back to the Stone Age and the Pharaonic, Roman, Greek and Coptic eras.

The project’s third stage is costing almost 300 million pounds, and a partial opening — which includes the temporary exhibition hall — will take place at the end of the year.

Al-Monitor:  What do you want to say to the people who are concerned about Egyptian antiquities?

Anani:  I would like to ask the world's governments if any of Egypt’s tourists were harmed before. I dare any state to prove that a tourist visiting Egypt in past years was harmed.