As part of their continuous efforts to retrieve Egypt's stolen, prized antiquities, Egyptian authorities announced on Dec. 20 the recovery of 36 artifacts that had been smuggled to Madrid. 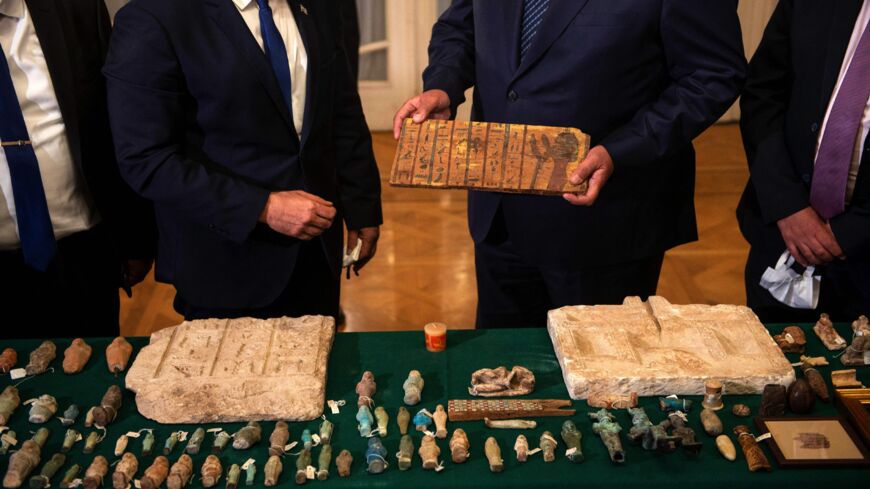 CAIRO — Egypt's Public Prosecution announced on Dec. 20 that Egypt recovered 36 artifacts from Madrid that had been smuggled to Spain in 2014.

The Public Prosecution wrote in a Facebook post on Dec. 20 that the Egypt-Spain judicial cooperation to combat this type of transnational crime resulted in the recovery of artifacts. This is also “an implementation of the UN resolution that was issued based on a proposal submitted by the Egyptian Public Prosecution at the Conference of the Parties to the UN Convention against Transnational Organized Crime in October 2020. It is also an implementation of the Egyptian Public Prosecution's plan to have an international instrument for the recovery of looted Egyptian artifacts as part of the Egyptian state’s strategy to preserve its history and resources.”

The Egyptian Public Prosecution stated that its investigations into this case began in June 2014 “when the Egyptian Ministry of Foreign Affairs received correspondence from the Spanish authorities about seizing 36 Egyptian artifacts from Alexandria in the port of Valencia. The Public Prosecution’s investigation resulted in identifying six defendants … who were brought before the court on charges of smuggling antiquities and forging and using official documents. The court sentenced them to prison.”

Magdy Shaker, the chief archaeologist at the Egyptian Ministry of Tourism and Antiquities, told Al-Monitor, “The handover of the artifacts that had been smuggled to Spain came after a major and joint effort by the Egyptian ministries of Foreign Affairs and Tourism and Antiquities, in cooperation with the Egyptian Public Prosecution and the judicial authorities in Madrid. Those artifacts were smuggled in a container, the suspects in this crime had been arrested, and all papers proving Egypt's eligibility for these artifacts were submitted.”

He said that the recovered artifacts are of historical importance and include a statue of the god Amun with the double feather crown and a beautiful piece of the goddess Sekhmet. Four Canopic jars were used by the ancient Egyptians during the mummification process, Shaker added.

He noted that “the recovery of smuggled and stolen Egyptian antiquities involves many procedures and complications and is not an easy process. For example, negotiations to recover the artifacts began with the Spanish side in 2014 and continued until the end of this year when Egypt’s eligibility was confirmed.”

He said, “We are facing a problem in the recovery of some smuggled pieces because some countries allow the trade and display of artifacts in auctions, such as England. Therefore, if we do not present the necessary documents, they may be sold and we will not be able to recover them. Other countries did not sign the Convention Concerning the Protection of the World Cultural and Natural Heritage, which obliges states to return stolen antiquities and to not sell them.”

In a statement on Dec. 21, the Egyptian Ministry of Tourism and Antiquities announced the recovery of 5,266 artifacts from a number of countries, including the United States, the Netherlands, France and Spain.

The ministry estimated that about 29,300 artifacts have been recovered from abroad since 2011, Shaaban Abdel Gawad, the supervisor of the ministry's Department of Recovered Antiquities, told Egypt's Al-Hayat channel on Dec. 11.

The chief archaeologist stated that “before 1983, it was permissible to trade with artifacts, and foreign missions had the right to obtain 50% of the discovered antiquities. Some leaders were given artifacts as gifts before the issuance of Law No. 117 of 1983, which prevented the export and trade of Egyptian antiquities.”

He added, “After the events of 2011, some artifacts were stolen from the Egyptian Museum. Also, illegal excavations are still ongoing, most recently the discovery of a cemetery in the Ain Shams in ​​Cairo a few days ago.”

The Egyptian Ministry of Antiquities had announced in 2019 that 32,638 artifacts disappeared from its warehouses over the past decades.

Article 41 of the Egyptian Antiquities Protection Law stipulates that the smuggling of artifacts outside Egypt is punishable by life imprisonment (25 years) and by a fine not exceeding 10 million Egyptian pounds.

Hussein Abdel Baseer, director of the Antiquities Museum at Bibliotheca Alexandrina, told Al-Monitor, “The [recovery] of the artifacts that had been smuggled to Spain is a great achievement for the Egyptian state as they represent part of the Egyptian people’s history. That is regardless of their sizes and even if these artifacts are as tiny as a grain of sand.”

“The Egyptian government is making great efforts and coordinating with a number of countries to recover its smuggled antiquities. A few days ago, Israel returned a number of artifacts to the Egyptian Ministry of Foreign Affairs,” he said.

On Dec. 9, Egypt received 95 artifacts from the Israeli authorities, which had confiscated them after they were smuggled outside Egypt.

He explained that the Egyptian government is working to recover a number of artifacts, mainly the head of Nefertiti from the Berlin Museum, the Rosetta Stone from the British Museum, the statue of King Ramses II from the Turin Museum in Italy, the Dendera Zodiac from the Louvre Museum, and the portrait bust of Prince Ankh-haf from Boston. He added that “these pieces consist of important artifacts that Egypt must recover and put on display in its museums, especially with the inauguration of the Grand Egyptian Museum next year."