Israel returned dozens of looted archaeological pieces to Egypt in a new sign of improving relations between the two countries in recent years. 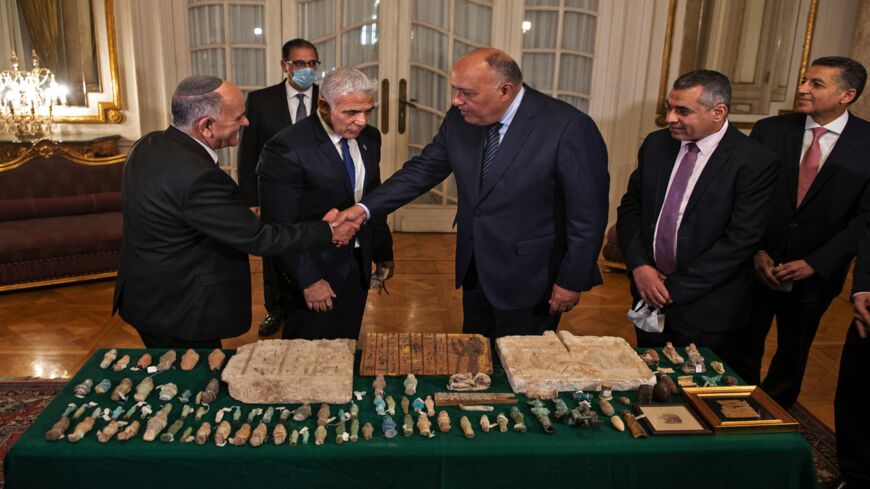 Egypt's Foreign Minister Sameh Shoukry (C) shakes hands with the director of the Israel Antiquities, Authority Eli Escozido (L), during a meeting with Israeli Foreign Minister and alternate Prime Minister Yair Lapid (2nd-L) and his accompanying delegation, which saw the return of stolen Egyptian artifacts that were smuggled to Israel and returned to Egypt, at Tahrir Palace in Cairo on Dec. 9, 2021. - MOHAMED HOSSAM/AFP via Getty Images

Egypt received 95 looted archaeological artifacts from Israel in the first such public move by Tel Aviv to return ancient items to Cairo. The pieces were transferred to Egypt by Israeli Foreign Minister Yair Lapid during his meeting on Dec. 9 with his Egyptian counterpart, Sameh Shoukry.

A statement by the Egyptian Foreign Ministry said Shoukry thanked the Israeli government for its cooperation in returning the ancient pieces to Egypt.

Four of the items were confiscated by Israeli authorities in 2013 from an antiquities dealer who smuggled them from Oxford, England. The other pieces were seized from a Jerusalem antiquities showroom in a raid in the same year.

Israel returned the relics to Cairo after Egyptian authorities presented documentation of the artifacts and an expert opinion from Yousef Hamed Khalifa, former head of the Egyptian Antiquities Sector at the Supreme Council of Antiquities.

Speaking to Al-Monitor, Khalifa said Egypt managed to have the artifacts repatriated after the showroom failed to prove the source of the archaeological pieces.

“Under UNESCO Convention, artifacts that were illegally trafficked must be returned to the country of origin, which is our beloved Egypt,” he said.

The expert said he was assigned with following up the file of the looted artifacts in Israel in 2014 by former Minister of Antiquities Mohamed Ibrahim.

“They were unable to prove that these pieces were legally transferred from Egypt,” he said.

The Israeli Foreign Ministry said it returned the archaeological pieces as a “gesture of goodwill” to Egypt.

Mohamed Abdel-Maksoud, former secretary-general of the Supreme Council of Antiquities, said it was not the first time for Egypt to regain ownership of trafficked artifacts from Israel.

He told Al-Monitor that Egypt regained archaeological pieces from Israel in 1993-1994 that were looted by Israel during its occupation of the Sinai Peninsula.

“After regaining the Sinai Peninsula, Egypt engaged in negotiations for more than 10 years with Israel to return its looted antiquities from Tel Aviv,” he said.

The expert said Egyptian authorities filed a complaint with Israel to regain the trafficked artifacts from Tel Aviv. “Israeli authorities launched an investigation with the owners of the showrooms where the pieces were on display, but they failed to prove the source of the antiquities,” he said.

Abdel-Maksoud continued, “Given to the importance of the issue to both Israel and Egypt, Tel Aviv returned the pieces to Egypt to show that it does not loot the cultural property of other countries.”

Egyptian authorities estimate that thousands of trafficked archaeological pieces have been returned to Egypt since 2011.

"Since 2011, the Egyptian state managed to repatriate 29,300 artifacts," Shaaban Abdel-Gawad, head of the Antiquities Restitution Department at the Ministry of Tourism and Antiquities, said in televised statements. "In this year alone, 5,300 ancient Egyptian artifacts have been discovered in the Museum of the Bible in Washington."

Abdel-Gawad said Egyptian authorities have registered all artifacts that were looted in the archives and are working to repatriate them. “We are closely following antiquities showrooms across the world as well as social media networks and Egyptian ports to restore all our looted artifacts,” he said.

Egypt was the first Arab country to sign a peace treaty with Israel in 1979 after decades of conflict, and the two countries maintain full diplomatic relations.

Relations between the countries have significantly improved in different fields in recent years. In January 2019, President Abdel Fattah al-Sisi admitted in a CBS interview that security cooperation with Israel "is tighter than it has ever been."

On Sept. 13, Sisi met with Israeli Prime Minister Naftali Bennett in the Red Sea resort city of Sharm el-Sheikh in the first public visit by an Israeli prime minister to Egypt in over a decade.

While many Egyptians are not averse to trade with Israel, the Egyptian public is wary of deepening ties with the Jewish state until a just and durable peace with the Palestinians is achieved.

During his visit to Cairo, Lapid met with Sisi where they discussed bilateral cooperation between Egypt and Israel and a host of regional issues, the Egyptian Presidency said.

Sisi said Egypt will pursue efforts to achieve peace based on the two-state formula and to de-escalate tensions between the Gaza-based Palestinian factions and Israel.

Cairo is a key player in everything involving Israel’s relations with the Gaza Strip. In May, Egypt succeeded in brokering a cease-fire between Israel and Hamas after 11 days of incessant violence — the worst between the two parties to the conflict.