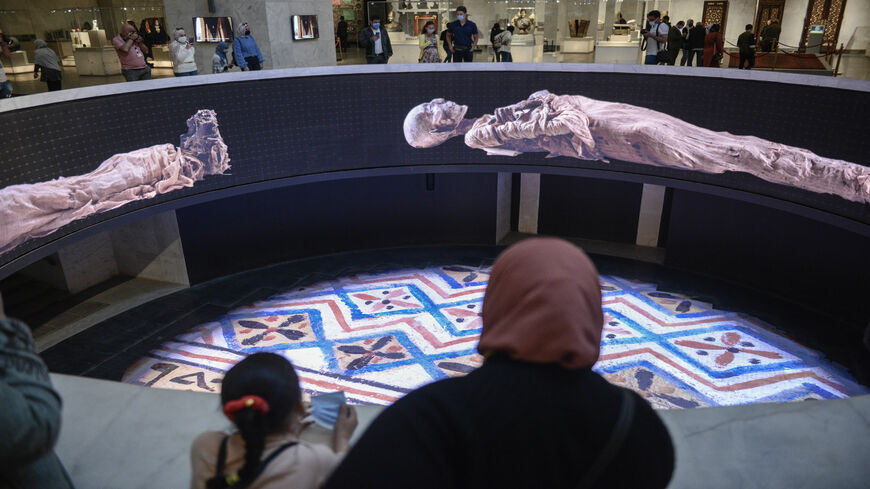 A screening about the royal mummies inside the new National Museum of Egyptian Civilization, in Cairo, Egypt, April 04, 2021. - Jonathan Rashad/Getty Images

CAIRO — A Polish archaeological research team says it has discovered a pregnant Egyptian mummy dating to the first century B.C. The findings were published in the Journal of Archaeological Science April 28. The research is part of the Warsaw Mummy Project, which began in 2015, that uses technology to examine human and animal mummies housed in the National Museum in Warsaw. In this case, a radiological examination showed the mummified woman had been pregnant.

The Polish scientists said the discovery is the first of its kind. The body is believed to have belonged to a high-status woman of the medical community and is wrapped in linen and plain weave fabrics and accompanied with a rich set of amulets. Close examination showed the woman likely died in her 20s and was between 26 to 30 weeks pregnant.

There was no official Egyptian comment about the Polish discovery, which stirred a debate among Egyptian archaeologists about the precedent of this case and calls to return the mummy to Egypt. Zahi Hawass, a former Egyptian minister of antiquities, said this is not the first case of a pregnant mummy, as another pregnant mummy was discovered in 2010. The body belonged to a dwarf dating back 4,600 years and was discovered in the tombs of workers who built the pyramids, he said.

Hawass told Al-Monitor, “We discovered this mummy in the workers’ graves and at the time it was a first case. What the Polish scientists discovered is not something new to us.”

However, Abdul Rahim Rayhan, director general of research, archaeological studies and scientific publishing in the region of archaeology of the southern Sinai Peninsula, told Al-Monitor that the Polish finding is the first of its kind in the sense that no pregnant mummy with a fetus still inside the uterus has been discovered before. “There have been previous discoveries of mummies that suffered complicated childbirths,” he said.

According to Rayhan, there were two ways to mummify a mother and her fetus when they both died during childbirth. Ancient Egyptians would mummify the fetus and place him or her beside the mother’s body in the coffin, or the baby would be placed back inside the mother’s womb during mummification.

On Nov. 14, 2018, an Italian-American archaeological team discovered the skeleton of a woman pregnant with a near-term baby placed in the pelvic area. Analysis of the skeleton showed the mother may have been suffering from a broken pelvis that was misaligned, which may have been the reason for her death during childbirth.

“Complicated childbirth that often led to the mother’s and baby’s deaths was common in ancient Egypt based on the analysis of human remains,” Rayhan said.

He said that at the Museum of Criminal Anthropology at the University of Turin in Italy, there is a mummy of a woman and the skeleton of her baby placed near her dating to the pre-Dynastic era. It was discovered in 2017 in an archaeological area near the city of Esna in Luxor governorate. It appeared the woman suffered from uterine prolapse after the baby was forced out of her uterus, pointing to the difficult childbirths women suffered in ancient Egypt.

He said Princess Hayhanhit, a little-known figure from the 11th Dynasty, also died after giving birth due to her narrow pelvis and suffering from vesicovaginal fistula.

Rayhan, however, criticized the Polish discovery, arguing that it did not take into account the material and moral rights of Egypt, as the mummy is an Egyptian artifact and the studies should have been carried out under Egyptian supervision and Egypt should have been informed of the findings. He called for the mummy to be returned to Egypt.

Wojciech Ejsmond, an archaeologist and a member of the Polish team, told CNN that the mummy was first brought to Poland in 1826 by a Polish merchant named Jan Wezyk-Rudzki. At that time, it was thought to be female, but during the 1920s, an inscription on the sarcophagus was translated, revealing the name of an Egyptian priest, Hor-Djehuty.

“This is one of the most complex matters,” Ejsmond said. “We know that in ancient times coffins were reused. Sometimes tombs were robbed and stolen so that they could be reused. During the 18th and 19th centuries mummies’ tombs were robbed and antiquity dealers were stealing precious items and replacing bodies,” the Polish researcher added.

Shaaban Abdel Gawad, supervisor of the Department of Recovered Antiquities at the Egyptian Ministry of Tourism and Antiquities, told Al-Monitor that the department is following up on the sales of antiquities in auction halls or on electronic platforms around the world in order to monitor the sale of Egyptian artifacts and take action to get them returned.

“Artifacts usually exit Egypt in one of three ways. First, legally through buying and selling before the sale of antiquities was banned in 1983. Second, as gifts from presidents until the era of President Anwar Sadat [1970-1981], and third, through illegal means by digging and smuggling,” Abdel Gawad said.

“We are resorting to several diplomatic, technical and legal methods to recover these antiquities,” he noted. “We have bilateral agreements with many countries such as Jordan, Spain, Germany, Italy, Cyprus, Greece, Lebanon and Saudi Arabia, which have greatly contributed to the recovery of many antiquities.”

Commenting on the Polish discovery, he said, “We are looking into this matter to verify how the mummy left Egypt — was it by legal means or through smuggling — and if there is a possibility to recover it.”

Since 2014, the Egyptian government has recovered more than 28,000 antiquities from abroad, including 21,660 antique coins and 6,665 other artifacts, according to Abdel Gawad.

He said it was difficult to recover smuggled artifacts since there is no official record. Often, when pieces are offered in auctions, under international law Egypt has to prove ownership of the antiquities to be able to recover them.

“It appears that the pregnant mummy is not registered in the Egyptian records as it was taken out of Egypt in the mid-19th century, i.e., before the sale of antiquities was banned. We also do not have any agreement with Poland,” Abdel Gawad said.

Hawass said the pregnant mummy has “no value, as it belonged to an ordinary person and not royalty.”

He concluded, “There are thousands of Egyptian mummies abroad in museums and universities, and some of them are crushed to be used for medicinal purposes. If the mummy was royal, we would have requested that it be returned to Egypt, as was the case with Ramses I, which was in Atlanta and was returned in 2003. I don’t believe the Egyptian government would want to regain this mummy."