In an interview with Al-Monitor, famed Egyptologist and former Minister of Antiquities Zahi Hawass discusses the problems facing antiquities in Egypt and expresses skepticism over reports of an additional chamber in King Tut’s tomb. 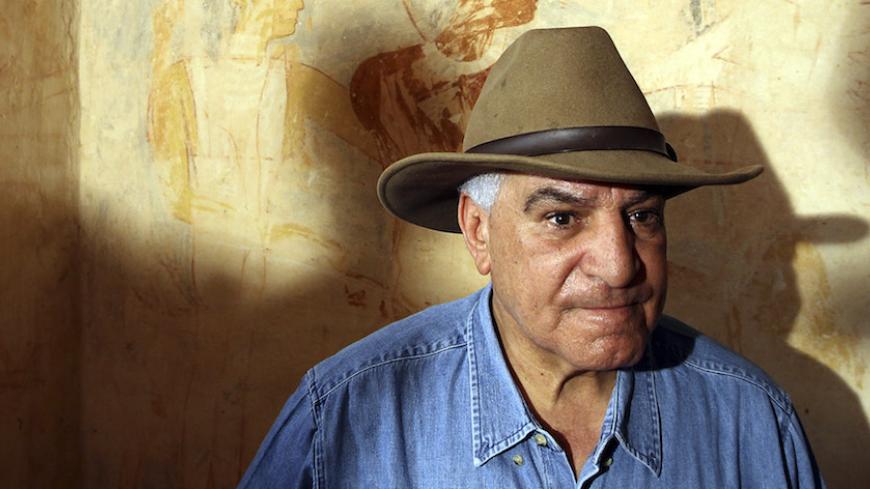 Secretary General of the Supreme Council of Antiquities in Egypt Zahi Hawass speaks to the media inside a newly discovered tomb near the Giza pyramids, Oct. 19, 2010. - RETUERS/Goran Tomasevic

CAIRO — The antiquities sector in Egypt has been shaken by several crises over the past four years. Home to many of the world’s antiquities, Egypt has been losing its historic legacy on a daily basis. Years of instability helped expand illegal excavation activities, and via smugglers, ancient Egyptian artifacts are now sold in major auctions around the world.

Meanwhile, the Ministry of Antiquities once again tried to draw the world’s attention to its monuments, this time by focusing on a new potential find in King Tutankhamun’s tomb, in what Minister of Antiquities Mamdouh al-Damaty described as “the discovery of the century.”

Al-Monitor interviewed Egyptian archaeologist and former Minister of Antiquities Zahi Hawass, who spoke about the main challenges facing Egypt in this field and offered his take on possible solutions.

Al-Monitor:  What do you think are the main causes for the crisis plaguing the archaeological sector in Egypt, which faces continued smuggling of antiquities and neglect of archaeological sites and museums?

Hawass:  The security turmoil in the aftermath of the January 25 Revolution has given rise to more illegal excavation in the areas surrounding historic sites and under private homes. Nearly two-thirds of Egyptian antiquities were smuggled abroad in 2011, 2012 and 2013. Antiquities trafficking is ongoing, but to a lesser degree thanks to strict security measures at historical sites and their vicinities. Several museum-looting and antiquities-trafficking incidents took place in the wake of the revolution. Moreover, the decline of tourism led to inadequate funding of antiquities bodies that, as a result, have been unable to develop museums and sites.

Al-Monitor:  How should the government deal with the issue of antiquities trafficking?

Hawass:  I would suggest ongoing training of the personnel guarding historic sites in order to improve their performance. The antiquities law should be amended to ensure that the act of theft is dealt with as a felony rather than a misdemeanor. I would also suggest the reinstitution of antiquities seizure units at airports and ports, as well as the establishment of advanced warehouses to preserve the discovered artifacts, just like the 60 warehouses established by the military.

Al-Monitor:  What is the nature of cooperation between the Egyptian government and other governments to combat antiquities trafficking?

Hawass:  Cooperation usually takes place between the Ministry of Antiquities and Egyptian embassies and consulates around the world. The Egyptian consul in New York, Ahmed Farouk, said that Egyptian embassies take the necessary measures to stop any Egyptian antiquities auctions abroad whenever information is available. Illegal artifacts are then returned to Egypt. The Ministry of Foreign Affairs also cooperates with foreign governments in this regard, and the ministry has been able to retrieve 700 smuggled artifacts. However, a considerably larger number has yet to be retrieved.

Al-Monitor:  How would you explain the public sale of Egyptian antiquities at exhibitions and auction houses?

Hawass:  Exhibitions take advantage of the lack of evidence proving that artifacts were exported illegally to sell them in public.

Al-Monitor:  Several artifacts have fallen victim to negligence. For example, reports emerged in 2014 that King Tut’s burial mask had been damaged during a botched repair. Are antiquities on the list of the current Egyptian administration’s priorities?

Hawass:  We are talking about damage to Tutankhamun’s mask and the partial collapse of the Pyramid of Djoser during renovation, in addition to many other individual mistakes that do not add up to a collective trend. But the Egyptian administration should now seek to prevent such mistakes in order to protect Egyptian antiquities.

There is also an exaggeration in reporting these mistakes by the media, for King Tut’s mask was distorted as a result of an individual error. German restoration specialist Christian Eckmann was called in to repair the damage, which he did, but Egyptian restorers should be constantly trained to prevent future errors.

Al-Monitor:  What do you think of some Egyptian archaeologists’ attempts to bring legal proceedings against replicas through international law?

Hawass:  I don’t understand their objection. Their opinion shows a lack of knowledge of the issue. For instance, Egypt profited from the Great Sphinx replica in China, as the number of Chinese tourists in Egypt since increased considerably. It would be unfair to resort to international bodies since they were granted official permission. Had the Chinese replica been genuine, Egypt could have sued China and other countries according to international law.

Al-Monitor:  What is your take on the recent discovery announced by the Ministry of Antiquities concerning the possibility of two additional chambers in King Tut’s tomb?

Hawass:  I have evidence to disprove British Egyptologist Nicholas Reeves’ theory about a hidden chamber containing Nefertiti’s remains behind Tutankhamun’s resting place. In theory, Nefertiti could not have been buried in the Valley of Kings, as she used to worship King Tut. The High Priests of Amun would not have allowed it. The radar Reeves used to prove his theory did not offer conclusive results, and in 2009, Reeves used the same radar to prove the existence of a tomb in front of Tutankhamun’s. Later on, excavation results showed that it was only a fissure in the rock formation. To validate his latest theory, Reeves must dig through the northern wall of King Tut’s tomb, and this would cause the whole tomb to collapse.

Al-Monitor:  If the predictions are true and there are additional chambers, what impact would this have on Egypt’s tourism sector?

Hawass:  There is no way to predict the outcome of such a discovery as long as we are speaking theoretically. Once the theory is proven, we can then speak of an outcome for tourism in Egypt.

Al-Monitor:  If the theory is proven false, how would this harm Egypt and Egyptian archaeologists’ reputation?

Hawass:  In such case, Egypt’s credibility would be compromised around the world. In this respect, I’ve presented the minister with a proposal consisting of appointing a committee of six Egyptian and foreign archaeologists to discuss the theory with Reeves and assess the radar’s results by comparing them to another digital radar’s findings. The committee will then present its verdict on Reeves’ theory. After that, we can announce the first steps toward a scientific discovery.

Al-Monitor:  Tell us more about your latest book. What are the major discoveries you wrote about in the book?

Hawass:  I have revealed the secrets of several mummies, like Queen Hatshepsut’s. Contrary to the theory suggesting she was murdered, the findings indicate that she actually died of cancer at the age of 55. The book also disproves the theory that Tut died after falling on his neck. Mummy forensics revealed that the hole in the king’s neck occurred during the mummification process to help with the application of the embalming fluid. The Judicial Papyrus of Turin [an ancient Egyptian record of the trials of conspirators plotting to assassinate Ramesses III in what is referred to as the "harem conspiracy"] was also decoded. It showed that Ramesses’ wife and son Numandi conspired to kill the pharaoh, who escaped this attempt only to be assassinated at the hands of two men, one of whom was able to slit Ramesses’ throat.

Al-Monitor:  What are you doing these days? Are there any plans to revive the reality show “Chasing Mummies” that aired in 2010?

Hawass:  I’m working on uncovering the secrets of the 19th and 20th dynasties via DNA profiling of the two embryos discovered in Tutankhamun’s tomb. Soon we will start working on a show similar to "Chasing Mummies." The new show will air on an Arab channel and will consist of 16 episodes. We haven’t yet chosen a title for the show, which will be directed by Italian director Sandro Vannini.