Mamdouh al-Damaty talks to Al-Monitor about the recent controversy surrounding King Tut's broken beard and reports of a pornographic film being shot in the Giza Pyramid. 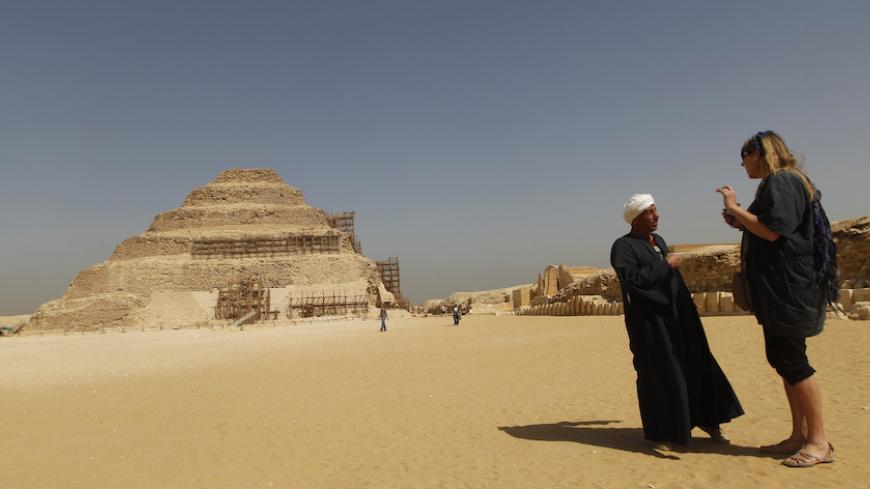 A guide speaks to a tourist near the Djoser Pyramid in Saqqara, March 5, 2011. - REUTERS/Peter Andrews

CAIRO — Certain reports in the press — such as the claims that the Meidum Geese painting is inauthentic or that the Djoser Pyramid collapsed during restoration — aim to destroy the legacy of Egypt's pharaonic history, Egyptian Minister of Antiquities Mamdouh al-Damaty told Al-Monitor in an interview.

The pyramid of King Djoser at the ancient site of Saqqara is one of the oldest buildings in the world, designed by Imhotep between 2667 and 2648 B.C.​ and belonging to the third pharaonic family. The Meidum Geese painting — often referred to as the Mona Lisa of Egyptian art for its aesthetic value — was found in the ancient tomb of Nefermaat, a nobleman, in the 19th century and is now on display in the Egyptian Museum.

Damaty did not say who he thought was behind the plot to tarnish the legacy of Egyptian history, but he accused local and international media outlets of participating in this conspiracy — even if unintentionally — by spreading rumors. Media outlets recently reported on allegations that UNESCO had removed certain Egyptian historic sites, such as the Pyramid of Djoser, from the World Heritage List, because of errors in restoration.

"No one can remove the pharaonic heritage from the World Heritage List," Damaty said, "because doing so means eliminating its existence."

He said that, despite claims otherwise, the beard on King Tutankhamun’s mask was not broken but "detached." He said, "The beard was glued back on later and required fixing." A report surfaced in January from an anonymous source claiming that the beard had been accidentally broken and was then glued back haphazardly, thus distorting the mask. Damaty said that a special commission has been formed to determine the best way to restore the mask. Tutankhamun​ was one of Egypt's most famous pharaohs, ruling from the age of 9. His tomb, discovered in 1922, is of great importance to Egyptology.

Damaty, born in Cairo in 1961, is a professor of ancient Egyptian antiquities, having taught at the American University in Cairo and the University of Basel in Switzerland. In 2001, he served as director of the Egyptian Museum for three years. He then served as chairman of Ain Shams University's Council of Antiquities until assuming the position of antiquities minister in June 2014, following a number of protests among ministry staff, in which they called for the dismissal of his predecessor, Mohammad Ibrahim, for failing to lead in the antiquities field.

Al-Monitor:  What is the current status of the archaeological restoration projects carried out by the ministry? Is the damage caused to Tutankhamun’s burial mask being repaired? What is the truth behind the collapse of the Djoser Pyramid during its restoration?

Damaty:  These matters are long gone and I do not know why the media insist on shedding light on them. Djoser is part of the Egyptian cemetery including the pyramids of Giza, Saqqara and Dahshur listed on the World Heritage List. The truth is that any monument sustaining any damage is restored and maintained. The campaign that targeted the monument was very strange. Sometimes there were talks about the collapse of the pyramid or a mistake in its external restoration, and at other times there were talks that restoration works ruined the pyramid’s old facade and therefore the UNESCO will remove said pyramid from the World Heritage List. No one can remove a monument from the UNESCO World Heritage List since this would mean removing an era from history.

Although UNESCO issued a report proving that restoration works are carried out on a scientific basis, some people filed a lawsuit accusing us of damaging the Djoser Pyramid. We translated the report and sent the translation to the public prosecutor’s for perusal. As for the mask of Tutankhamun, the beard did not break but was detached from the mask. Since the discovery of the cemetery, the beard was not part of the mask. The latter was displayed for 20 years without the beard. The beard was glued back later on and required fixing. This was done using a slightly large quantity of a strong material that led to a bad appearance. Therefore, we decided to form a special committee and conduct sufficient studies. We also made a fake mask [a mannequin] to try doing the restoration works to obtain the best results before we carry out the actual restoration works. The mask is currently displayed in its initial place.

There are more than 60 restoration projects, most of which were stopped and some of which were stalled. This is due to lack of funding after the revolution. Moreover, we rely on self-financing and the state budget does not allocate any subsidies to the ministry. We made some attempts to set up a holding company to manage the antiquities services to increase the ministry's income. We are expecting an improvement in tourism next fall and we were able, thanks to our own efforts or in collaboration with some of the missions in Egypt, to complete a number of projects including the reopening of the Royal Jewelry Museum and el-Moez Street. This is in addition to the opening of the Hanging Church, Sphinx Square, Fatimid cemetery in Aswan and the implementation of the new security system in the Temple of Luxor.

Damaty:  There was no porn film shot in the pyramid area, but a woman secretly took some pictures of herself inside the pyramid. This is not new and dates back to 2011 and the woman was denied entry to Egypt. I do not see the problem with the parties held in the chamber of King Khufu. This does not violate Egyptian law, which allows parties and special opening hours after work hours subject to the payment of the fees. I do not know why the parties were described as freemasonry parties. Is every person sitting inside the pyramid and lighting candles considered a freemason? Is the Egyptian Ministry of Antiquities required to ask all tourists visiting the pyramid about their religion? We welcome any visitor, regardless of their religion and whether they are a freemason or not. We do not ask any tourist about their religion and what happened is an attempt to tarnish our image.

The security plan is implemented and we recently installed a new security system in the Temple of Luxor. We will apply this system to prevent any stranger from entering the antiquities surroundings without being caught by surveillance cameras.

Al-Monitor:  You issued a statement regarding articles in the UNESCO Convention undermining Egypt's right to the return of artifacts smuggled abroad. What are those articles? How is the ministry working on the recovery of smuggled Egyptian artifacts?

Damaty:  According to Articles 6 and 9, the convention applies as of the date of its signature with no retroactive effect. Some artifacts were stolen 80 years ago and we want to recover them. We, therefore, call for amending the part on the certificate of origin. Some artifacts were stolen out of Egypt [and taken] to another country, where their sale certificates are drafted and taken into consideration. We call on the country of origin owner of the artifact to draft the certificates to stop the sale of any artifact smuggled from Egypt. Amendments are difficult to introduce, therefore we formed a committee to prepare a draft for a new convention, [which will be presented to UNESCO] since it is impossible to amend a UNESCO convention.

Al-Monitor:  How does the ministry handle auctions for the sale of smuggled Egyptian artifacts held in a number of international capitals?

Damaty:  I cannot close auctions organized for the sale of artifacts abroad. We did not make such a request because auctions are subject to the laws of the country they take place in. We call for stopping the sale of Egyptian artifacts in auctions. I took the same procedures in European countries, the United States and even Israel. There is one approach for dealing with antiquities in all countries of the world, and we have seen good cooperation in terms of recovery of artifacts. The museums of some advanced countries do not accept smuggled artifacts and this enabled us in the past to recover artifacts through friendly relations. These museums return to us the artifacts we prove are smuggled.

Al-Monitor:  How does the ministry deal with the widespread phenomenon of random, secret archaeological excavations?

Damaty:  Unfortunately, the [police’s] weakness [in terms of security] that occurred in the three years following the January 25 Revolution had the biggest impact. A large quantity of artifacts were taken out of the country. Currently the Tourism and Antiquities Police is starting to regain its strength and prestige, and it managed to stop numerous cases of secret excavations or smuggling operations. Moreover, antiquities fraud operations were stopped, such as the sale of fake models as original artifacts.

Al-Monitor:  Are the allegations made by the head of the Italian Archaeological Mission to Egypt on the lack of authenticity of the Meidum Geese painting true or false?

Damaty:  If this were true and the painting were fake, why did the Italian researcher making such allegations not submit a request to the Egyptian Museum to bring in modern equipment to estimate the age of the painting? These allegations are unscientific and this is why we disregarded the matter.