Ahead of World Tourism Day on Sept. 27, Egypt opened the southern cemetery of King Djoser after nearly 15 years of restoration works. 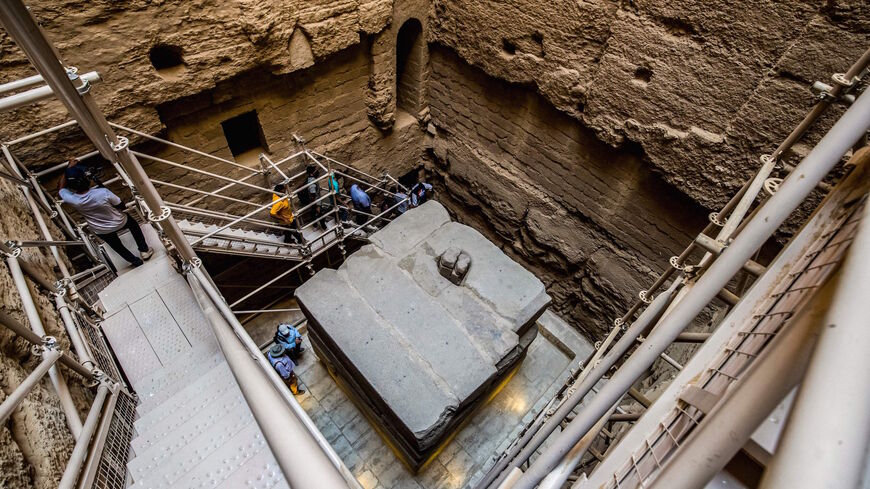 This picture taken on Sept. 14, 2021 shows a view of a part of the south tomb of the third dynasty Ancient Egyptian Pharaoh Djoser (27th century BC) at the newly-restored southern cemetery in the Saqqara Necropolis south of Egypt's capital Cairo. - KHALED DESOUKI/AFP via Getty Images

CAIRO — The southern cemetery of King Djoser in the Saqqara region, south of Cairo, has been reopened after the restoration works that began in 2006 were completed.

The tomb of King Djoser is located in the south of the funerary area in Saqqara, according to Mustafa al-Waziri, Secretary-General of the Supreme Council of Antiquities, and it consists of two parts. The upper part of the cemetery includes a limestone mastaba (a terrace-like flat-roofed, rectangular structure), while the lower part is carved into the rock at a depth of about 30 meters, he added.

A stone staircase leads to the lower part of the cemetery, and a well at the end of the cemetery includes a burial room with a huge pink granite sarcophagus similar to the burial room of the Step Pyramid, according to Waziri. The structure also includes a labyrinth of corridors whose walls are decorated with hieroglyphs of the king and his titles.

Egyptian archaeologist Zahi Hawass told Al-Monitor that the site and the Step Pyramid nearby — where the king is actually believed to have been buried — were on the verge of collapse 15 years ago. “After inspection of the site, I took the decision of restoration, and we contracted with a company to undertake the restoration work," he said. "We started the restoration to save the cemetery and the Step Pyramid [in 2006] up until the 2011 revolution and the overthrow of the Mubarak regime. Due to the riots and violence in the country back then, the restoration works were suspended.”

Hawass added that Egypt’s minister of tourism and archaeology, Khaled al-Anani, formed a committee to resume the restoration in September 2017. The Step Pyramid opened in 2020, he continued.

The restoration work is among the most important archaeological projects in the history of Egyptian antiquities, Hawass said, because the King Djoser sites were on the verge of total collapse.

“The Saqqara region includes 13 archaeological pyramids. The pyramid of King Djoser (Step Pyramid) dates back 5,000 years. The seat of government during the Old Kingdom era was the Great Pyramid of King Khufu,” he added.

Hesham Samir, an engineer and assistant minister of antiquities for engineering affairs, said in a statement during the opening of the King Djoser cemetery that the ceilings had been restored and the cracks fixed. The granite coffin was also restored, passages were paved to welcome visitors and a ladder leading to the well and cemetery was installed, he continued, and the cemetery was fully equipped with lighting.

The King Djoser collection is one of the most important archaeological collections dating back to the Old Kingdom era, according to Mohamed Hamza, dean of the Faculty of Archaeology and former assistant president of Cairo University.

The monument is believed to be Egypt’s first step pyramid, Hamza told Al-Monitor, explaining, “The construction of the tomb originally began with one mastaba only, but then two, and later six mastabas — each smaller than the other — were piled one upon another, forming what was called the Step Pyramid. The pyramid is 60 meters high. So far, scientists have yet to determine whether the cemetery is symbolic or an actual burial site, even though it is 30 meters deep.”

Hamza added, “The Saqqara funerary area is one of the 10 cemeteries in the ancient city of Memphis. These cemeteries start from Abu Rawash in the north to Beni Suef in the south. The Old Kingdom, which includes the third to sixth dynasties, was named the Age of the Pyramid Builders. Egypt is home to about 120 pyramids, most significantly the Giza pyramids.”

He continued, “The opening of the King Djoser cemetery will attract more tourists, especially since the king is known to archaeologists across the world. The question now is how to promote tourism. I believe [the government] must deploy more efforts to prepare the roads leading to Saqqara, in addition to providing many tourist services and developing the entire region. Saqqara is replete with many huge archaeological monuments."

It is believed that Alexander the Great was buried for a year in Saqqara before the royal tomb was prepared for him in Alexandria, Hamza said. "But so far, the tomb of Alexander has not been found. It is even possible that Alexander is still buried in Saqqara,” he added.

Hamza called for more tourism services and developing a global plan to promote Egyptian tourism. Egypt will soon be hosting international tourism and archaeological events, including the opening of the Grand Egyptian Museum, and the centenary of the discovery of King Tutankhamun’s tomb on Nov. 4, 2022.

For World Tourism Day on Sept. 27, the Egyptian Ministry of Tourism and Antiquities and the General Egyptian Authority for Tourism Promotion are posting one video per day on their social media pages about each Egyptian governorate (there are 27 overall).