The construction of two highways near the ruins of the ancient city of Memphis has alarmed archaeologists, who fear that traffic on the new roads will damage the archaeological treasures in the area and expose them to theft. 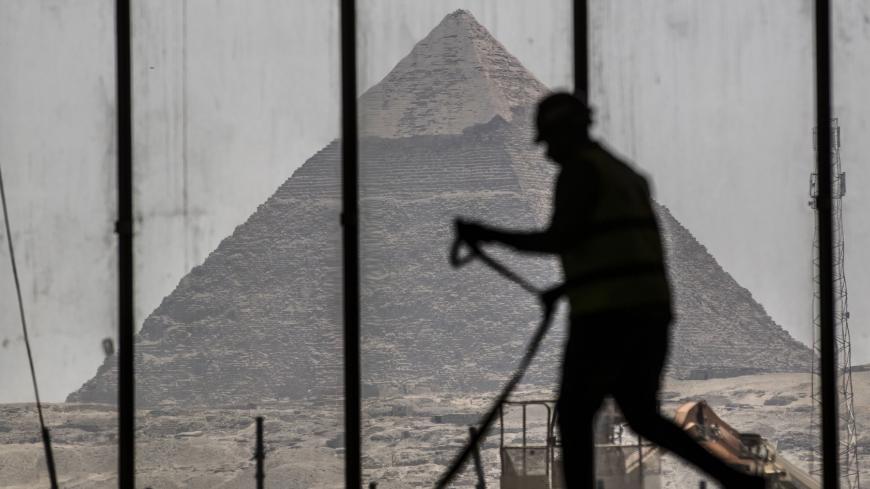 A picture taken on April 13, 2020, shows a view of the Great Pyramid of Khufu (Chephren) seen through the scaffolding on the Grand Egyptian Museum, which is currently under construction, in Giza on the southwestern outskirts of the capital Cairo. - KHALED DESOUKI/AFP via Getty Images

Work is in full swing for the construction of two motorways near the ruins of the ancient city of Memphis, the capital of the Old Kingdom of Egypt. The new roads are part of an infrastructure plan to develop the area around the Giza Plateau in Giza ahead of the much anticipated inauguration of the Grand Egyptian Museum in 2021.

One of the roads will cross the desert south of the Great Pyramid of Khufu, the only survivor of the seven wonders of the ancient world. The other route will pass between the limestone step pyramid of Djoser and the Dahshur area south of Cairo.

The highways will cross close to Memphis, the first capital of ancient Egypt, alarming archaeologists, who fear that traffic on the new roads will cause damage to archaeological treasures in the area and make them vulnerable to theft.

Speaking to Al-Monitor, a former archaeologist said the road near the Pyramid Plateau will bring congestion and pollution and harm to archaeological sites in the area.

“It is strange that one of the routes is being rebuilt after it was suspended in 1995 following the intervention of UNESCO to ensure the conservation of the archaeological sites in the area,” said the archaeologist, who asked to remain unnamed.

The northern road was first introduced in 1994 during the era of former President Hosni Mubarak as part of Cairo’s first Ring Road project. It was suspended after intervention from UNESCO, which was concerned that the highway could endanger the archaeological monuments on the Giza Plateau.

“The southern highway will also pose a threat to the necropolis and monuments in Memphis, a city full of ancient treasures,” the archaeologist said. “This city is the history of ancient Egypt and its heritage must be preserved.”

A request sent by Al-Monitor to UNESCO for comment was referred to the World Heritage Center, but no reply had come as of the publishing of this report.

Believed to have been founded in 3,000 BC by Egypt’s first King Menes, Memphis was a site sacred to the ancient Egyptian gods and has extraordinary funerary monuments, including rock tombs, ornate mastabas, temples and pyramids.

The city, whose ruins are located near the town of Mit Rahinah, just south of Giza, includes the Temple of Ptah, the god of creation and the patron of craftsmanship in ancient Egypt. It also includes the sun temples in Abu Ghurab and Abusir, the temple of the god Apis, the Serapeum and the Heb-Sed temple in Saqqara.

There are more than 38 pyramids at Memphis, including the Great Pyramids of Giza, a UNESCO world heritage site. There are also more than 9,000 rock-hewn tombs from different historic periods, ranging from the First to the Thirtieth Dynasty and extending to the Greco-Roman Period. Memphis and its Necropolis were added to the UNESCO’s World Heritage List in 1979.

In a Sept. 17 statement, the Egyptian Ministry of Tourism and Antiquities denied any construction activities were ongoing on the Giza Plateau. “The development project of the Giza Plateau was finished in 2019 and will be inaugurated in 2021,” the ministry said.

According to the ministry, only environmentally friendly electric vehicles will be used to take visitors to the Giza Plateau.

Speaking to Al-Monitor, Mostafa Waziry, head of the Supreme Council of Antiquities, dismissed fears that the new routes will harm the archaeological sites.

“Archaeologists have surveyed the area to make sure that there were no monuments hidden beneath the ground before starting the construction of the new roads,” he said. “The Egyptian state and all its institutions pay a great deal of care to protecting our archaeological monuments,” he stressed.

Waziry continued, “We launched the project to develop the Giza Plateau in order to prevent the tourist buses from entering the area or causing any harm to the archaeological sites there,” he said. “We will have a great visitor center where tourist buses will not be allowed in. Only electric buses will be permitted to move in the area, which is a very respectable effort.”

Abdelaziz Salem, an archaeologist at the Islamic World Educational, Scientific and Cultural Organization, believes that the concerns raised over the new road construction near the Pyramids and Memphis have been exaggerated.

Salem said that striking a balance between carrying out infrastructure projects and maintaining the integrity of the archaeological monuments has always been a point of concern.

“On the contrary, I believe that the Giza Plateau is a well-protected area and that there is an urgent need in Egypt for development projects around the area,” he said.