A mix of ineptitude, mismanagement and corruption is leading to the damage, loss and theft of invaluable treasures from Egypt’s history. 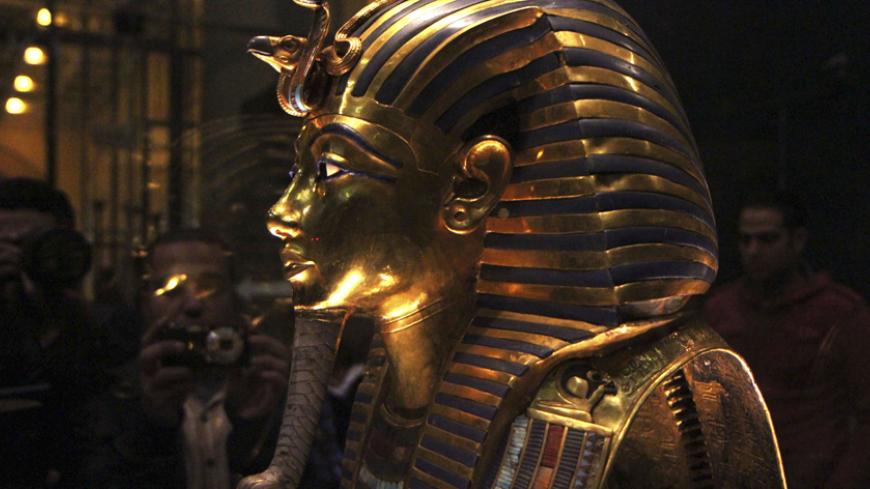 The golden mask of Pharaoh Tutankhamun is seen on display at the Egyptian Museum in Cairo, Jan. 24, 2015. - REUTERS/Al Youm Al Saabi Newspaper

CAIRO — The current crisis in Egypt in regard to the damage to King Tutankhamun’s mask, which is a one of a kind golden mask from the ancient pharaonic monuments, in a botched restoration at the Egyptian Museum brings to mind the series of incidents of negligence and laxity in protecting Egyptian artifacts. The mask has been visibly marred and the beard crooked as it was glued back on using epoxy, leaving the mask looking fake. The beard fell off the golden mask during an attempt to adjust the lighting in its case.

In addition to incidents of damage, the residents of the areas with archaeological sites are regularly digging up the pharaohs’ graves, stealing and smuggling their belongings. This has become more common since the January 25 Revolution, when the security situation in the country deteriorated.

The latest incident, the damage of Tutankhamun’s mask, took place in August 2014 and is still causing controversy, since Tutankhamun was one of the most famous pharaohs. He became king around 1334 B.C. when he was 9 years old. His tomb, which was discovered in 1922, is of great importance to Egyptology, since the treasures inside the tomb were intact and the famous golden mask accompanied Tutankhamun's mummified remains. The discovery of his tomb contributed significantly in finding out how a royal tomb was prepared for a king’s afterlife.

Monica Hanna, an Egyptian archeologist, told Al-Monitor that this was not the first time the officials responsible for ancient monuments acted with negligence. In 2006, the southern facade of the Saqqara pyramid was damaged and in 2007, damage was done to the city of Rosetta, which is also considered an important archaeological landmark, as well as to Al-Jayyousi Mosque.

Hanna considers these failures in properly dealing with the Egyptian artifacts and monuments during their restoration the result of 30 years of corruption.

“A crisis unit for monuments and artifacts must be formed. It should be supported by the army and police to confront secret prospecting at monuments as well as terrorist acts. This is resulting in the loss of incomparable treasures, similar to what happened in the Museum of Malawi, Museum of Islamic Arts and El-Arish [National Museum],” she said.

These museums witnessed acts of vandalism and looting. The Museum of Malawi was vandalized and 1,040 artifacts were stolen in August 2013. This happened at the same time as the violence that engulfed Egypt after supporters of ousted President Mohammed Morsi were dispersed at the Rabia al-Adawiya sit-in. On Jan. 24, 2014, the Museum of Islamic Arts, which was founded in 1903 and included Islamic art in its different stages throughout history, was destroyed in a terrorist explosion in front of the Cairo Security Directorate.

What is both surprising and ironic is that there are 14,000 security guards to protect the Egyptian artifacts, but they are not actually trained to preserve the monuments that are being stolen on a daily basis, according to Hanna. The discussion of the damage to Tutankhamun’s mask did not end, despite the decision by the minister of antiquities to investigate the concerned officials. The situation escalated and resulted in public outrage expressed after experts at the Ministry of Antiquities announced they doubted the mask was the original piece, claiming it was a fake. Subsequently, the Egyptian government consulted German conservation expert Christiaan Eijkman to examine the mask and confirm it was the original piece.

Although the Federation of Egyptian Archaeologists described the damage to the mask as severe, the head of the federation, Abdul Halim Noureddine, told Al-Monitor that the mask — which is still on display in the Egyptian Museum — was not a fake but it was not handled in a way befitting its value. “Epoxy, the material that was used to fix the mask’s chin, is not recommended for restoration,” he said.

He said that the restoration expert who used epoxy had succeeded in restoring 90% of the piece, while the remaining 10% showed serious flaws due to the excessive use of this material on the mask, which is made of pure gold. For the mask to be put on display again quickly, the restoration had been done in haste, which resulted in the complete distortion of the archaeological piece.

The government official denied accusations regarding the restoration work of the Saqqara pyramid, “The only mistake there was that the person involved in the restoration did not preserve the randomness in which the ancient Egyptians placed the rocks, and we are working on fixing this,” he said.

Sunbul admitted that a significant issue occurred during the restoration of the city of Rosetta, but that was when the Egyptian monuments commission was affiliated with Minister of Culture Farouk Hosny, before the January 25 Revolution.

Perhaps the fact that an Egyptian government official admits the negligence in previous restoration work of Egyptian archaeological sites is proof that there is a real crisis in preserving the pharaonic heritage. However, at the same time it could be a promising start to handle such crises and find suitable solutions.