After the grand success of the Pharaoh's Golden Parade, Egypt is preparing for another major event involving the relics of Tutankhamun, one of ancient Egypt’s most famous kings. 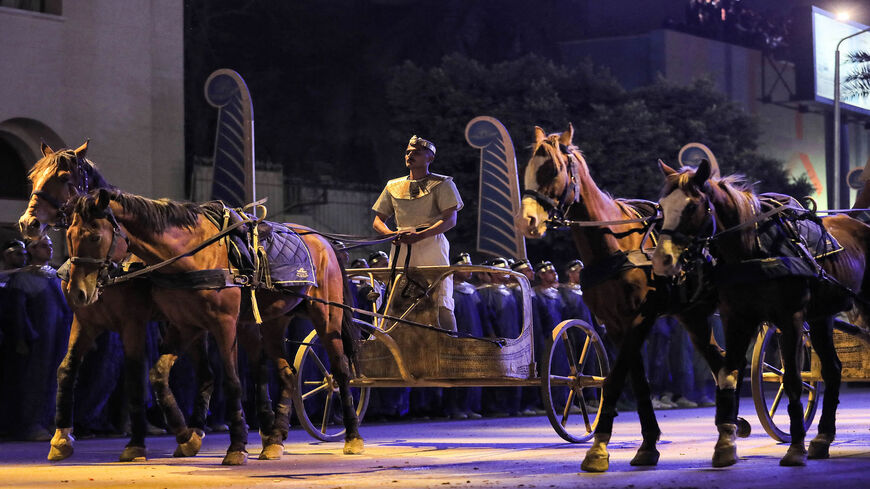 A performer rides a two-horse chariot at the start of the parade of 22 ancient Egyptian royal mummies departing from the Egyptian Museum in Tahrir Square to the new National Museum of Egyptian Civilization in Fustat, Cairo, Egypt, April 3, 2021. - Mahmoud Khaled/AFP via Getty Images

CAIRO — Egypt’s Minister of Tourism and Antiquities Khaled al-Anani announced during an April 6 symposium titled “Royal Mummies” — in reference to the Pharaoh's Golden Parade that was organized by the ministry on April 3 to transfer royal mummies — that another procession is being prepared for the transfer of the golden mask of King Tutankhamun and the mummy’s golden sarcophagus to the Grand Egyptian Museum, in a unique event measuring up to the Pharaoh's Golden Parade.

Speaking at the symposium organized as part of the ninth scientific conference of Ain Shams University in Cairo, Anani noted that most of the treasures of Tutankhamun have been transferred from the Egyptian Museum in downtown Cairo's Tahrir Square to the Grand Egyptian Museum, west of Cairo near the Giza pyramids.

“The transfer of the mask — which is the most famous artifact in the world — will take place a few days prior to the inauguration of the museum, which has not yet been set,” he said.

This comes on the heels of the great success of the Pharaoh’s Golden Parade on April 3 to transfer the royal mummies from the Egyptian Museum to the National Museum of Egyptian Civilization in the city of Fustat in Greater Cairo.

The historical parade saw the transfer of 22 Pharaonic royal mummies belonging to the era of the 17th, 18th, 19th and 20th dynasties, including 18 kings and four queens. The parade won worldwide acclaim in terms of organization, preparations and media coverage.

Tutankhamun is considered the most famous king of ancient Egypt, especially of the 18th Dynasty (1327-1336 B.C.). Despite his short reign, which lasted only nine years, the king’s global fame came from the discovery of an entire cemetery in the Valley of the Kings in Luxor governorate, in southern Egypt, in 1922.

This was one of the greatest historical discoveries in history. The cemetery sheltered valuable relics, including the mask that was designed to protect the mummy’s face and head and has a magic formula engraved on its back, according to the Egyptian Ministry of Antiquities website.

Hussein Abdel Bassir, director of the Antiquities Museum of Bibliotheca Alexandrina, told Al-Monitor via phone, “The transfer of Tutankhamun’s mask from the Egyptian Museum in central Cairo to the Grand Egyptian Museum will be an event that should be celebrated with the same significance as the Pharaoh's Golden Parade.”

He said, “Tutankhamun is seen as one of the most important kings of ancient Egypt in terms of fame, and next year will mark the 100th anniversary of the discovery of this tomb."

Abdel Bassir spoke of the significance of the king’s golden mask at a global level, which he believes is something that would serve Egypt’s goal to restore the country's tourism industry to what it was prior to the January 2011 revolution.

“The inauguration of the Grand Egyptian Museum will be added to the country’s tourist pillars, which include the National Museum of Egyptian Civilization in the city of Fustat and the Pyramid of Khufu, one of the Seven Wonders of the World,” he explained.

He noted, "All of King Tutankhamun’s 5,398 artifacts will be transferred to the Grand Egyptian Museum. Some of the relics have been transferred already, such as the shrines to be showcased as part of the museum display of the treasures of the golden king.”

Bassir added, “With these activities Egypt is constantly seeking to promote its relics and artifacts to support the tourism sector that has been dealt successive hard blows since the 2011 revolution, including the Russian plane crash in the Sinai Peninsula in late 2015 and the coronavirus pandemic last year. Tourism contributes up to 15% of the Egyptian gross domestic product and is a main source of hard currency.”

“The main goal is currently to measure the number of tourists, but to turn Egypt into a safe tourist destination in light of the coronavirus crisis,” Anani noted at the time.

Bassam el-Shamaa, a tourist guide and Egyptologist, told Al-Monitor via phone, “Tutankhamun’s funerary mask is a piece that tourists are always eager to see when they visit Egypt. The mask is made of pure gold. It is 54-centimeters [21 inches] tall and is decorated with semi-precious stones such as carnelian. The mask bears likeness to Osiris [Egyptian god of the afterlife], and not Tutankhamun.”

He said that the April 3 royal mummies’ parade was “an excellent event that made Egyptians proud as it resonated with the world, which means we can do something similar again.”

Commenting on how the mask would be transported to its new location, Shamaa said, “I believe the mask would be placed inside a bulletproof glass box carried on special vehicles [fitted with special shock absorbers] similar to those used in the royal mummies procession, amid a tight security plan.”

On the economic impact of such events, Shamaa said that this will be reflected on the tourism sector in the long term and not immediately given the coronavirus pandemic.

“We do not expect to reap the fruits in the coming months, and this is not the fault of the Tourism Ministry or the state for that matter. This is the result of a pandemic that hit the entire world and affected tourism movements everywhere. But these processions will remain engraved in people’s minds and will hopefully encourage many tourists to visit Egypt when the pandemic is contained and over,” he concluded.